This post will break down what the new portable recorder will have to offer and how it fits into the current handheld field recorder market.

The Field of Portable Recorders

The Tascam Portacapture X8 ($389.98) was announced at an interesting time. Sony, once the king of quality portable recorders, had retired its PCM-A10, PCM-D10, and formerly the best handheld field recorder, the PCM-D100. Tascam shelved its top-end portable recorder as well, the DR-100MKIII. You can find a few of these units floating around if you look hard, but availability is thinning out.

This has left a gap in choices for upper-tier handheld recorders. Field recordists who want a portable solution for capturing sound effects were left with mid-tier units from Zoom and Tascam’s revised lineup.

Here are the offerings from Zoom:

And the main field recorders from Tascam:

There’s a lot to choose from in those lists. For discerning field recordists, though, only three things matter:

Of course, every field recordist has different needs. But those three concerns consistently top request lists.

Let’s see how the X8 stacks up at first look.

What headlining features does the X8 have?

Here’s a video from Tascam introducing its features:

And here are some other, less-vital features available with the X8: 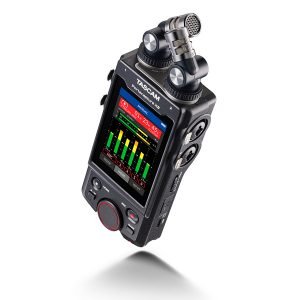 Initial Reflections on the Portacapture X8

How will the X8 perform? In the end, the quality of its microphones and preamps will determine its success with field recordists. There’s no way to know this until its release later this year.

I have a DR-100MKII. I find the onboard microphones are poor. However, I have had great success capturing many types of sounds using its XLR jacks with kit ranging from Sennheiser M/S set-ups to Clippy and LOM microphones. I am hopeful that the X8 will perform similarly with its preamps and improve upon the quality of its onboard microphones.

As far as I’m aware, 32-bit float capability is a first for portable recorders. This has the potential to make field recording workflow far easier during dynamic sessions. Similarly, the massive touch-screen interface is a handheld recorder first. From scanning the manual it appears to be more user-friendly than Sound Devices’s MixPre series touchscreen.

The simplified hardware interface veers away from the complexity of former gear: the prominent gain trim and diminutive transport controls are localized to the lower part of the unit.

How will this unit compare with existing offerings?

The closest comparison would be the Zoom H6 ($349.99). It too offers 6 inputs (2 onboard, 4 XLR/TRS) with detachable microphones, but lacks 32-bit recording and a touchscreen.

If we’re considering other units based on channels alone, the Zoom F6 ($749.99) is an interesting contrast. While not a portable unit and lacking onboard microphones, it does support 32-bit float recording and 6 dedicated XLR inputs (instead of 4). The same could be said for Sound Devices’s MixPre-6 II ($1060).

How will the X8 perform for field recordists? It appears to be a compelling option worth considering upon.