I’ve mentioned Absentia DX (ABDX) a few times here on the site. An earlier article explored if the app’s noise reduction tools could fix damaged field recordings. While the app was designed to repair dialogue, I found its hum removal tool in particular was effective on all types of audio. A later post revealed new tools: doppler remover and crickets remover.

Today, TODD-AO has unveiled more new features in its 2.0 release.

The biggest news is the inclusion of an AAX AudioSuite plug-in. The plug-in allows users to process audio directly within a Pro Tools timeline. Like other AudioSuite plug-ins, Absentia can process single clips or many of them in one track or across many tracks. 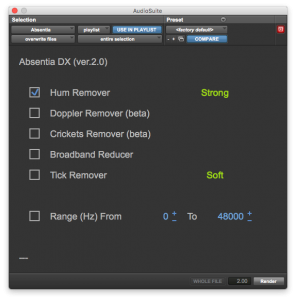 Both the ABDX plug-in and the desktop app work together to clean audio. Clicking the plug-in’s Render button shuttles the audio to the standalone app where it is processed and returned to the editing app. This is all done in the background. Editors will simply see a typical Pro Tools progress bar and then cleaned audio will appear in their timeline. It’s important to note, though, that the background app must be open at all times when editing. Don’t worry, though. Its digital footprint is small, and the ABDX team claim memory or performance isn’t affected.

Another big change is that Absentia now offers an optional yearly subscription. The initial license for both the desktop app and plug-in is $70. That will gain access to one year of app and plug-in upgrades and access to new and improved processing algorithms. After a year is up, users have the choice to buy another year’s worth of upgrades for $20. It’s optional, though, and if you choose to opt out, the software will still work with all the algorithms and tools available when the subscription expires.

Subscription updates are done within the app itself.

Check out Absentia 2.0 on the TODD-AO website or Amazon.