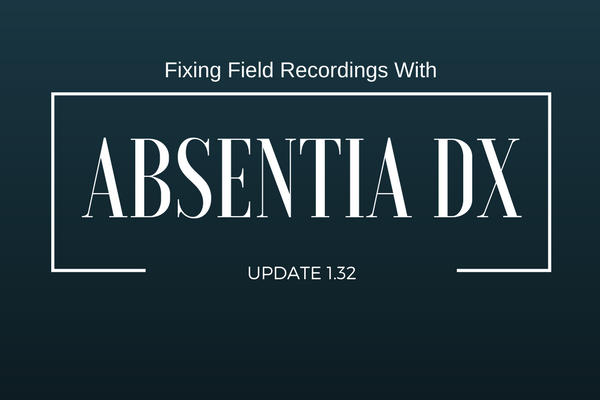 Earlier this year I wrote about the release of Todd-AO’s new noise reduction software Absentia DX. The app was designed by sound supervisor Rob Nokes to eliminate the manual labour he found his team needed to clean tracks on the Hollywood films and television shows they edit.

At that time, I wondered if the app could be used to fix field recordings. Of course, it is designed to clean dialogue. That’s a completely different task than repairing sound fx. However, despite working on sounds for which the software was not designed, DX fared well, especially with its hum removal.

Nokes’ team have not been idle. 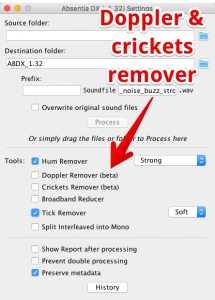 In an email, Nokes mentioned to me that the Doppler remover works particularly well on distant jets. It has had success with cars and trucks and the team is augmenting those particular results.

And what about cricket removal? We all know that no two cricket species sound the same. Each has its own distinct pitch. DX removes some strains of the crickets well, Nokes told me. The team is analyzing other insects to increase the types of crickets it can detect and reduce.

Beyond these two innovative features, what does the latest release of DX offer?

There are also tweaks to the types of audio and video files the app accepts, or, as the release notes explain:

An earlier update added a drop-down menu that more clearly indicates the scope of the tick remover.

I’ve yet to try the new noise reduction features on field recordings, but I am excited to do so.

Why not give it a shot yourself? The update is free to existing users. New users can purchase the app for $49 on the Todd-AO site or on Amazon.