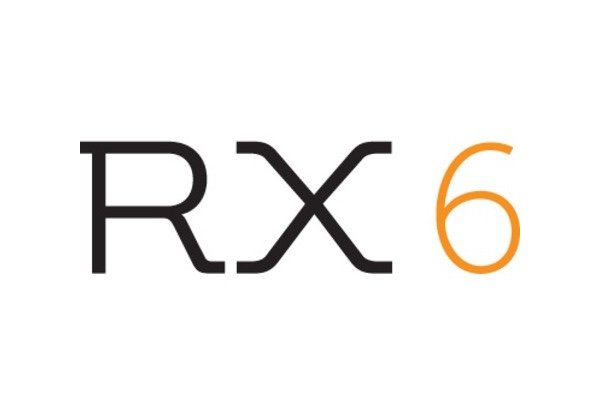 Is it that time again?

iZotope recently released the latest version of their suite of audio repair tools, RX 6. New numbered releases of the widely respected software have been revealed at regular intervals. RX 4 arrived August 2014. Just over a year later, RX 5 was released September 2015. RX 6 has waited longer than that gap of 13 months, being unveiled in April of this year, 19 months after the last version.

What has the wait brought us? Today’s post will take a first look at new features and changes to the industry leading audio repair software.

RX ($129 – $1,199) has surged in popularity in the last three years. The majority of its users are post-production dialogue editors and music mastering pros. The software has also found a passionate following from the field recording community, too. After all, capturing field recordings occurs outside, beyond the ideal environments of Foley rooms and recording booths. That’s why rouge hums, buzzes, wind noise, clipping, crackling, and more often invade sound fx gathered on location. RX’s success in resolving these common field recording issues has made it an indispensable tool for sound fx mastering techs and sound librarians. 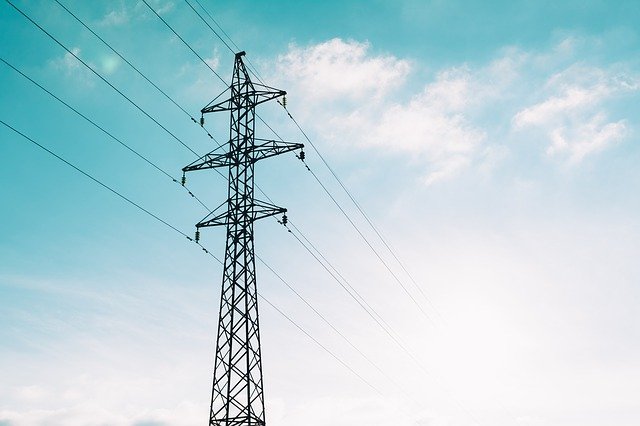 At the moment, however, sound fx fans are an incidental market for iZotope. Most of the RX software is aimed to provide tools for dialogue and music problems. That hasn’t deterred sound clip fans, though. They’ve adapted the tools to polish their field recordings for their listeners and sound library aficionados.

So, this post will consider RX from the perspective of field recordists, sound fx mastering technicians, and sound librarians. Naturally, RX is a huge app. I’ve been using it for a month, so this will be a “first-look” of the changes and features I’ve discovered while repairing both specific sound effects and ambiences.

A Recent History of RX

Let’s take a quick look at the tools introduced with the recent versions of RX from the perspective of a sound fx mastering tech.

RX 4 introduced cool repair modules such as Clip Gain, Leveler, and EQ Match. For sound fx fans, these had limited use. One feature, however, was worth the price: RX Connect. This plug-in allowed pros using editing apps such as Pro Tools to whisk a troublesome snippet of audio to the stand-alone RX app, repair the audio there in a more manageable interface, then zap it back to the editing app to continue working. It was a dramatic improvement to sound fx mastering workflow. 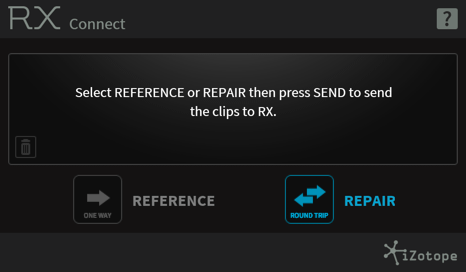 You’ll notice a theme here. While it’s indisputable that RX is capable of repairing audio and offers innovations with every release, usable improvements for sound effects fans were incidental.

In a way, that’s natural. The app is designed for dialogue and music. Sound fx fans twist the modules to use them to repair field recordings. However, it does invite the question: are incidental improvements worth the hefty upgrade price ($199 – $799) every year-and-a-half?

So, I’ll use this post to highlight the value of an upgrade for sound effect creators. I’ll skip describing the new modules and improvements that benefit music and dialogue pros. That will help you decide if upgrading to RX 6 is worth it for you.

With each release RX has refined its interface. RX 6 is no different. Yes, it retains its dark grey palatte, however it appears smoother and more fluid. For example, RX does not display the interface tools or waveform/spectrum slider unless audio is present. 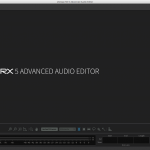 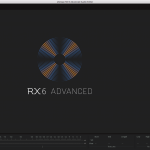 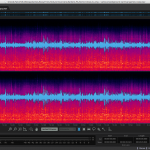 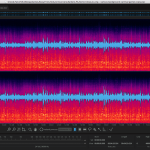 The background for data boxes matches the general colouring. While this does make the app appear more “pure,” I do find myself missing the distinction between data boxes (say, undo levels, cursor position, etc.) and the background with box outlines. It’s a minor quibble. 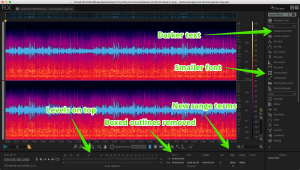 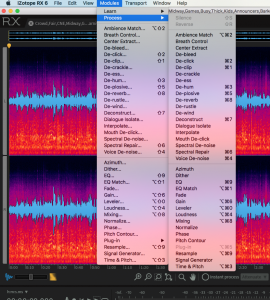 The app’s menu structure has changed quite a bit. RX’s module menu access is now much more complex, but also more unified. RX 5 invoked modules from the “Window” menu item and activated them from the “Process” menu. Now, RX 6 does this all in one place, under the “Module” menu item. That allows learning, processing, and invoking modules from one drop-down menu (or sub-menu, in the case of learning and processing). It’s a bit of a sprawling list, but more intuitive.

RX 6 has undergone a considerable organizational overhaul. Previously, similar tasks were grouped in a single module. For example, RX 5 gathered Gain, Normalize, and Fade tasks in a single “Gain” module and allowed switching between them by clicking on header tabs. Now in RX 6, each of these tasks is split into its own module. This approach impacts modules such as Channel Ops, De-Noise, Time and Pitch, and De-Click as well. 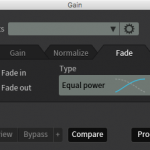 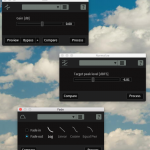 In a way, this is a great idea. This allows users to see all open modules at once instead of flipping between tabs to check settings. For example, you can set your Fade slopes in one module, and bring up a second Gain module with your typical settings there. That reduces clicking and allows viewing all settings at once glance.

The effect of this? The list of sidebar modules has exploded. Since every task has been separated into its own module, the list scrolls down farther than most displays can present. RX 6 accommodates for this in two ways. First, it groups similar modules under common headers: repair, utility, and measurements. Also, RX 6 allows for creating saveable “list filters.” That allows users to hide modules they don’t use, and display only their favourites. 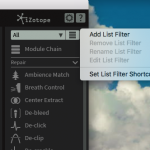 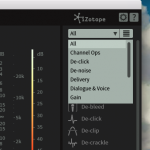 Like every previous release, RX 6 introduces new modules, and shuffles others around. Some that were previously RX Advanced-only options are now available in the Standard version of RX. 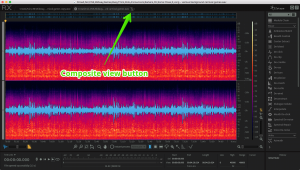 What remains for sound clip mastering techs? There are two improvements. The first is Composite View. This is a button to the right of all open sound file tabs. Clicking it merges all open files with the same sampling rate (maximum 16) into one display. Think of it as RX’s version of flattening Photoshop layers. That allows you to select an area on all files and process on them all at once. Then, afterwards, the sound clips can be unstacked into their own tabs again. 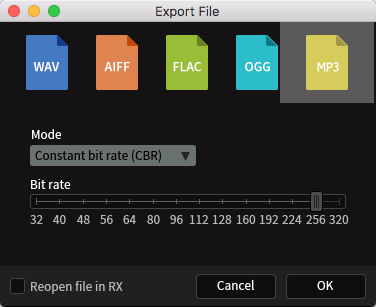 The final improvement for FX fans is that MP3 Export is now baked into RX. That makes it easy to sending compressed samples to clients or listeners without additional third-party software. 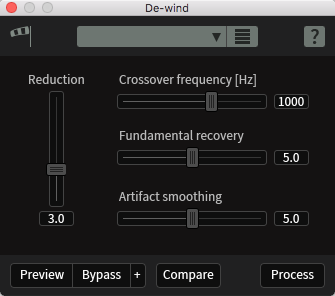 At first I was excited about the new De-Wind module. However, note that it seems better suited to gusts as opposed to steady wind rumble. The RX manual puts it best:

De-wind removes intermittent low frequency rumble that can occur when light to moderate bursts of wind come into contact with a microphone diaphragm. De-wind is not designed to remove heavy wind bursts that blow out and distort a microphone signal.

The De-wind module is best suited to remove and reduce intermittent wind noise in the foreground (for example, a recording with periodic wind gusts that come into direct contact with the diaphragm of the microphone) as opposed to constant wind noise in the background.

In my tests, even at low levels (reduction 2, various crossover frequencies from 120 Hz to 1000 Hz), the module strips away too much the spectrum to be usable with full-frequency sound effects.

RX 6 offers some other minor tweaks for FX users:

For dialogue and music pros there are improvements to voice De-Noise, De-Plosive, and Ambience Match.

Thankfully, RX 6 has fixed a file-saving bug. Previously, it was impossible to overwrite WAV files with the extension in capital letters (lower case was fine). RX 6 now allows overwriting files with extensions in both caps and lower case. 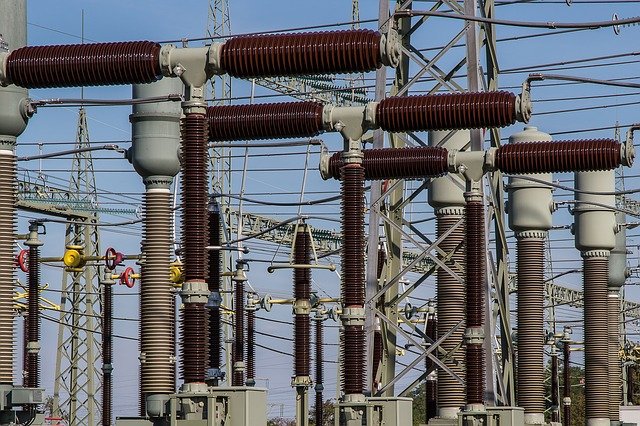 It certainly will. Its Spectral Repair and De-Clip tools are particularly powerful. With care, the De-Noise and De-Hum modules can work wonders. Other fx tools such as De-Crackle, De-Click, and even EQ Match have their place with sound fx mastering. The RX batch processing and module chain utilities, and Instant Processing Tool help make repairing audio easier.

Is it worth upgrading from previous versions? That question is more difficult to answer. Unlike previous versions, RX 6 does not offer multiple compelling modules or workflow tools for sound fx pros.

Upgrading from RX 4? The main perk would be the addition of a feature introduced in RX 5 – instant process. Upgrading from RX 5? Unless you use Composite View extensively (or work with dialogue or music), you may feel RX 6 is an underwhelming upgrade for working with sound effects.

Despite the feature set you require and your personal upgrade path, RX remains the king of audio restoration, and a valuable tool for field recordists, mastering technicians, and sound librarians.