You are here: Home / Q and A / Explorers of Ambisonics – Stéphane Larivière 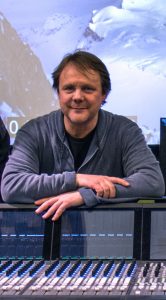 Today’s guest has been capturing Ambisonic field recordings for more than a decade. Stéphane Larivière has been experimenting with this fascinating format through his work on video games (the Assassin’s Creed franchise, Far Cry 3), films, and sound library recordings.

Creative Field Recording: Can you share with readers how you began working in pro audio? What compelled you to work in sound?

Stéphane Larivière: Music being part of my everyday life from the age of six, it feels it’s been the only thing in my mind since I was a teenager fascinated with sound systems. A natural path from music performance and studies to electroacoustic music composition with strong interests in music recording and producing, as well as multimedia and interactive media. Sound design appeared to be a perfect fit to me from my first days in post-production, which I’ve been doing since 1994. Creating the right sounds, contributing to the vision of directors, to give life to moving pictures, be it animation, live action, or interactive and video games, has always given me a lot of joy and satisfaction.

SL: It was capturing the sound of a psychiatric hospital, from both sides of the fence. The vocal sounds from the residents and their environment, as well as soundscape of the debilitating repetitive work of some services. That was for my first electroacoustic composition, using a stereo reel to reel Uher 4400 and its dedicated microphones (1989).

SL: I had read about the technology through my studies and experimentations with surround sound, but it must be my friend Daniel Courville, a work colleague from 2001 to 2008, who made me give it a try. Daniel is very well known in the Ambisonic community since the early 1990’s, having done his master degree research on that very topic, and has since been a convinced promoter of the concept and even made a bunch of plugins to work with Ambisonic recordings. 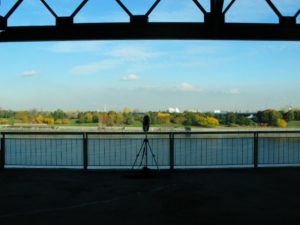 Recording in the Old Port, Montréal

In 2006, I was able to rent a ST250 and a Sound Devices 600-series to go around town for a couple of days, grabbing everything I could, mostly exterior ambiences. A year later, I was able to go again for sound ambiences hunt with a ST350/Sound Devices 744T kit, and in studio experiments with ST350/ ProTools HD. In the recording studio, I used a variety of instruments (voice, viola, bowed cymbals, percussions, especially some scraping and shaker sounds), walking around in circle and passing over the top of the mic. That gave me a good idea of the pros and cons of that recording technology with the tools we had back then.

I know I am going to repeat things brought up in the previous interviews, but here is some feedback. The ST250/Sound Devices 664 combo was particularly challenging. Not being able to lock the four preamps on the recorder combined with the absence of proper monitoring of the B-Format signal gave me headaches. But what was recorded properly sounds good and has all the benefits of the post-production flexibility from the B-Format.

My 2007 sessions went a lot smoother. The ST350 kit was a bit too noisy to my taste for quiet ambiences, but was in perfect shape for the studio session. So the good stuff confirmed the possibility to get spaciousness and precise location of sound source in the 360° field when used in most environments. It is my experience too that within small indoor spaces, moving objects in a 3D manner around the mic can be tricky to replicate or integrate, depending on the frequency content of the source and the reflection properties of the surfaces. But with good integration tools, the proper amount of added early reflections (and reverb) should get things in place. Listening back with today’s tools, I am more convinced by the results than I was at the time. As for fast moving objects, it is as good as any coincident technique can be… 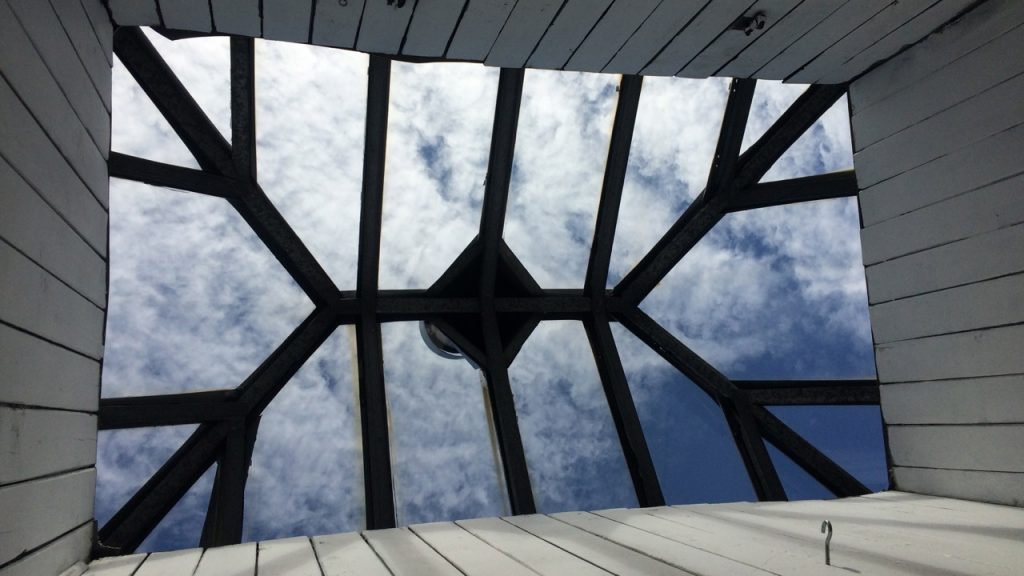 CFR: You mentioned to me that you have been working in Ambisonics for 10 years using a variety of Soundfield microphones. Can you share with readers your experience using these models? How has your kit evolved?

SL: The first thing is to be aware of the non-forgiveness of this recording technique. You need to have a tight and fixed position on all axis, using appropriate stand, suspension and blimps size, and a very good recorder to benefit from the technology. If you don’t have that, it can be a lot of work to reach your initial goal, or sometimes more easily than with other techniques, to reach the useless threshold. It is not always that critical, but in some context it is and because of the limited monitoring capacity in the field, it is oftentimes to be quick on the set up and be at the very best position verses the environment, be it a small or large space.

Field recording in a city park

Apart from what I mentioned in the previous answers, I know some people have had their ST250 being inspected and repaired and are very happy with the results. It was a great-sounding microphone from the get go. But to be on the road and in the field, the ST350 also needed to be replaced. It has had its own journal of issues, experienced by many users. I have spent hundreds of hours with that system, using three different kits. Especially for my work at Ubisoft for Assassin’s Creed Brotherhood, Assassin’s Creed 3, and Far Cry 3. But now there is the ST450 MkII, and it fills the bill. My first choice for quality and portability. 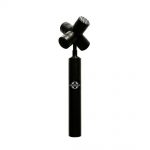 The SPS200 is a very good microphone too, but working with A-Format is a bit of a drag. No proper monitoring cannot be a first choice. I never had the opportunity to try the Core Audio TetraMic and have yet to try the Ambeo. I would love to A-B-C-D compare the DSF MkII with ST450 MkII – SPS200 – Ambeo. Regarding the DSF kit, we don’t see it a lot, because it is the most expensive and has been used mostly by broadcasters and wealthy organizations. But again, can’t have an opinion on the price leap if we can’t A-B compare it.

CFR: What favourite tools do you have for working with Ambisonic recordings in the studio? 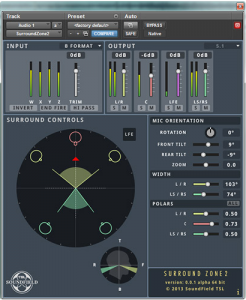 SL: My first step is to run the recording through SurroundZone2 for A to B-Format conversion and Harpex, in ProTools, because this is best-sounding/easy-to-use for me at the moment. And I have done most of my post last year using Two Big Ears’ Spatial Workstation, productions that were dedicated to the Samsung Gear and YouTube. Audiokinetic’s Wwise is always my first choice for everything gaming/VR/AR where we can integrate that middleware in the pipeline. But of course I am testing and working with most everything we can find on the market right now.

CFR: Can you share with readers an Ambisonic project that was particularly challenging, or one that made you especially proud?

SL: All VR/360 projects involving a shooting stage with Ambisonic microphones + hidden or LAVs mics have been particularly challenging. With so many different camera rigs and concepts, it’s been most of the time an issue to get the Ambisonic microphone at the right spot.

One great project – for which I cannot share any link at this time – was for a symphony orchestra, choir and soloists where I could have the Soundfield DSF-B MkII kit in the middle of the orchestra and a SPS200 in the choir.

So the one I am most proud of due to its amount of work and thoughts and care is the B-Format Ambience Library I am just about to put on the shelves for sale. Considering everything I have witnessed during the last two years, seeing the variety of type of productions and therefore needs for Ambisonic source recordings, it has been a journey of its own to build this bundle, and the final package should be relevant and very useful for many sound designers and producers.

CFR: You have extensive experience working with Ambisonic field recordings. 10 years ago, Ambisonic equipment, tools, and projects were very different. Now, AR, VR, and 360 video are becoming more prominent and tools have matured. What interesting developments in Ambisonics you seen during that time?

SL: One of the basic main improvements up to 2013 or so, was the development of Harpex and SurroundZone2 plug-ins, and the ST450 MkII microphone kit. The SPS200 small body was a nice idea – hope I could put my hands on one – the Zoom F8 is handy, and Cinela blimps are great. Parallel to that, all the trail blazing done by people like Bruce Wiggins and Daniel Courville, just to name these two. Actually there has been ongoing research in that domain since the beginning, it was just in the shadow of everything else that was going on.

Then the glorious breakthrough of the technology as it is becoming the reference for Oculus, Google, Facebook and the like, the smartest way to go in order to get 3D spheric sound in VR. This has unleashed major interesting solutions in the post-production side, in order to use it with ever-improving results. We must be very thankful to the guys at Two Big Ears for their contribution, the proactivity of Reaper and Audiokinetic, again just to name a few. Simply put, now that we can create a final mix as an Ambisonic file is very very interesting. We just need the possibility to integrate that wisely in all pipelines. Worth mentioning also the efforts from companies like Dysonics for working on an integrated solutions platform.

CFR: AR, VR, and 360 video have become more popular in recent years as more games, applications, and hardware have become available. What do you think we can expect from Ambisonics in the future?

SL: It would makes sense to me that it becomes the core tech for most of 3D sound design/ integration/final delivery for anything AR/VR/360 video. Most of what is now labeled by the AES Mixed or New Realities? I think we’re already pretty close to that.

As for sound recording, I hope we can expect more options: high quality compact solutions for microphones, preamps, recorders, and sample-accurate four-channel wireless systems, A-format monitoring, etc., and a good selection of four-channel linear phase plug-ins for basic EQ, noise reduction, and dynamic. (We need a four-channel iZotope RX5 Advanced for Ambisonic.) Last but not least, the importance of the best possible binaural render tools. And this is also an interesting topic to me. Are we going to rely solely on headphones (earbuds?!?)? Obviously, the mainstream VR/360 productions will rely on that for a while, but AR is a different beast with its own needs, and there are many applications that will ask for more than headphones, I think, in a not so far future…… 😉
So that is the beauty of Ambisonics. We have the right signal to go many ways. Exciting!

CFR: Can you share with readers a favourite Ambisonic field recording?

Stéphane Larivière’s has kindly shared with us some Ambisonic recordings on Soundcloud.

My thanks to Stéphane Larivière for sharing with us today!