You are here: Home / Interview / Explorers of Ambisonics – Paul Col 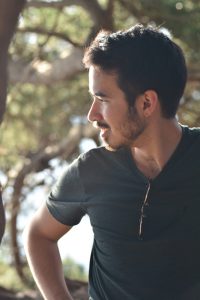 I first met today’s guest last year when he launched a new type of sound fx Web shop. Paul Col described the community-powered store he runs at CrowdSourceSFX. Later, Paul also described the kit he uses to collect field recordings for that website during the “A Month of Field Recordists” series last year.

As the current series began shaping up, I reached out to Paul again. I had been fascinated by the kit he detailed last year. I asked what he thought of it now, after he had been using it for a while. I wondered what he thought about using an Ambisonic microphone to capture field recordings. Paul kindly shared his thoughts, and they are intriguing.

So, today Paul reflects on Ambisonic field recordings as well as insight on the pros and cons of an Ambisonic kit and capturing B-format sound effects.

Paul Col: I first learned about the Ambisonic format when I was in audio school, when we were studying and experimenting with the various ways you can cleverly arrange microphones to achieve interesting recordings, and one of the teachers briefly covered the concept of Ambisonics, which in 2011 was not nearly as popular as it is today. At the time there wasn’t a clear reason to adopt or even experiment with Ambisonic recording because there wasn’t really a viable playback medium that could take advantage of a spherical soundfield.

CFR: Why did decide to begin recording Ambisonic sound effects?

PC: Sometime during 2015 I started getting a feeling that the spatial audio train was about to take off (or maybe it already had). I was hearing about Ambisonics more and more frequently from my colleagues, and the VR/360 forums were alive with speculation and jerry-rigged DIY spatial audio solutions, and every avenue kept leading back to B-format in some way.

There was a kind of ‘Wild West’ prospector thing going on, where everyone was REALLY excited about VR and 360 video, but in reality the tools were basically nonexistent (or superbly expensive), and to make matters worse there were absolutely no protocols or standards because only a handful of people had done it before. During that time I researched as much as I could about the format and ultimately I couldn’t resist jumping in. Between the potential applications for VR/360 as well as being an incredibly convertible audio format for 5.1/ST applications, it made perfect sense to me.

CFR: What was the first Ambisonic field recording you captured?

PC: My first Ambisonic field recording trip was to Reid State Park in Maine, which is a secluded beach on the coast of Maine, and it was surprisingly successful. Considering it’s a relatively small beach (in comparison to the behemoths of Rio or Florida) it has a pretty extensive cross section of oceanic sonic offerings, including rocky shores, sandy beaches, tidal pools, sheltered sand bars, estuaries, and rocky cliffs, so I was able to experiment with Ambisonic field recording in a pretty diverse set of locations. I’ve since been back a few times to take recordings during different seasons, and it continues to be a fantastic source of interesting oceanic sounds.

CFR: What kind of Ambisonic equipment do you use? What are the pros and cons of this set up?

PC: My kit is pretty simple, and is comprised of the following pieces: 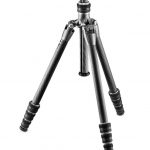 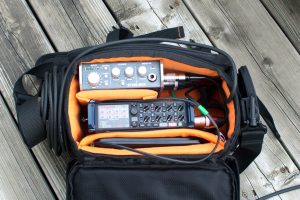 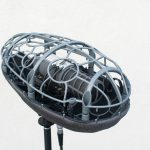 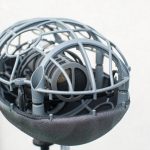 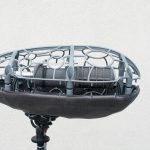 Pros of the setup:

Cons of the setup:

CFR: How do you work with Ambisonic field recordings after you bring them into the edit suite?

PC: For my film and TV work I only use B-format as an interchange format. My procedure is normally as follows: I load the B-format onto a quad track in Pro Tools, add the SurroundZone2 plugin to the track, modify the pitch/roll/yaw to fit what is happening on (or off) screen, tweak the polar patterns if needed, and print the results to a 5.1 or stereo track. What’s really great about B-format is that you can produce multiple perspectives just by modifying or automating the SurroundZone’s parameters for a single recording, which can be useful for perspective cuts or camera pans or zooms.

CFR: Did you find there was a learning curve working with an Ambisonic kit and recordings? Did you experience any challenges recording this way? How did you overcome them?

PC: Field recording in Ambisonic definitely demands a different awareness than stereo or even 5.1 recording. The steepest part of my learning curve was figuring out when it was appropriate to record in the Ambisonic format. It’s a tough call because one of the strengths of the format is that it’s very friendly to decoding and converting to whatever format you need, so a car pass by recorded Ambisonically will sound great when decoded to stereo, but won’t be nearly as useful in 5.1/spatial. So does a car pass by make for a good Ambisonic recording? In my opinion: no, but it still has a constrained value if what you’re after is a stereo recording. In that way, recording in Ambisonic is really overkill for the vast majority of one’s recording needs, and the big challenge I’ve had is figuring out how to use the format to its fullest. 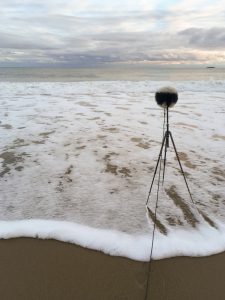 Reid State Park Ambisonic recording on the beach with ST450

When I was first experimenting with my kit my initial reaction was to use it like any other microphone – find an interesting sound, point the microphone at it and hit record, but in hindsight my point-and-shoot recordings are pretty unremarkable. The results are specific sound effects (a cat meowing, or a door creaking for example) that are inappropriately spatialized, which again are still useful when decoded, but really have no business being spatialized at the microphone level. In contrast, the recordings I’m most proud of are the ones that capture a space, and the feeling of being in that place in time. In these types of recordings you can’t necessarily localize sound sources, but you get the feeling that you are there. To me that is the primary strength of the format, and now I find myself only seeking out sounds that are representative of something intangible, rather than specific, at the sonic level.

CFR: Can you share with readers some of your experiences field recording while working with the Ambisonic format?

PC: So far I’ve had a lot of failed attempts, and some successes. To touch on the former, one of my least successful endeavors was trying to record my mother’s cat. Despite being a particularly expressive and vocal cat, unless I convert to mono almost none of the ‘shotgun style’ recordings I took of him are useful. Plus, image shift is the enemy of Ambisonics, so I think it’s likely that none of those recordings will ever escape my hard drive.

In terms of successes, I’ve had good results recording oceans, elevators, parking garages, server rooms, fireworks, parks, and construction sounds. The common theme between these sessions is that they all capture a space or perspective, more so than a particular effect. Most recently I captured some interesting sounds when I revisited the same beach that I mentioned earlier (Reid State Park), but took a more ‘in situ’ approach by putting my microphone somewhat in the waves to capture the feeling of being ankle deep the ocean. 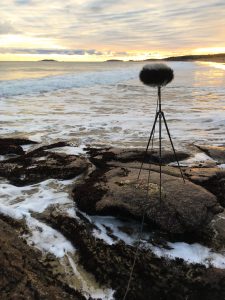 Reid State Park Ambisonic recording on the beach with ST450

CFR: What is your favorite Ambisonic recording? Why?

PC: Earlier this year there was some maintenance being done to my building and for about a month they were drilling and grinding into the brick walls, and one morning they were drilling directly outside my bedroom window. The sound was immersive and intrusive, and it felt like the whole room was being torn apart. I recorded it, and the resulting recording is unlike any other construction sound I’ve heard (especially over a headset), because while you can distinctively hear the drilling, it’s delocalized. The vibrations and grinding feel like they are coming from all directions – from the room itself! Take a listen to the stereo decoded version as well as the WXYZ file (download 14 MB ZIP file, copyright Paul Col):

PC: I actually have no idea where Ambisonic field recording is headed. At the moment it seems like the majority of Ambisonic microphone users are primarily using it for production sound on VR/360 productions, but from a field recording perspective I think that it might become a popular format for ambiences and room tones due to it’s unparalleled flexibility in the editing stage. As a film & TV sound editor I find the format to be incredible versatile; I’m not limited to what the field recordist decided to point their mic at – I can decide what I want to emphasize and what I want to ignore within a recording, and I can do it quickly.

In the future I’m hoping to directly incorporate B-format recordings into editing sessions, using automation of the decoding parameters to dictate my intentions, but for the time being I’m still decoding to discrete tracks in order to simplify the workflow and prevent confusion. I also look forward to working more closely with VR and 360 content creators in order to enrich their projects and better solve their spatial audio needs.

My thanks to Paul Col for taking the time to share his thoughts with us.