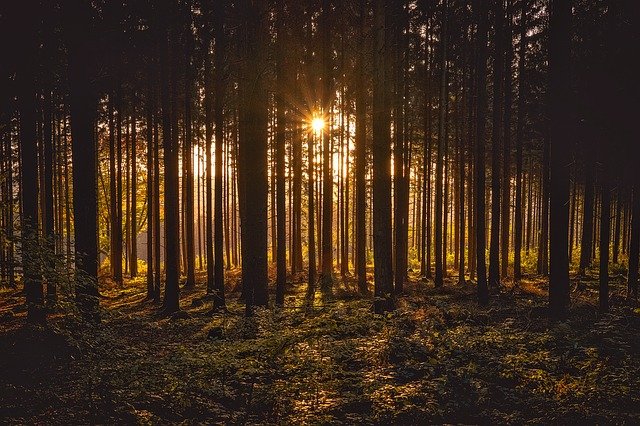 Imagine: soothing waves creeping onto a beach, then retreating with a sandy hiss. Hear distant thunder rippling as it rolls over a mountain. Imagine quiet, evening rain pattering on fallen autumn leaves.

Wilderness field recordings are some of the most loved sound effects. The sound of nature has a universal appeal.

However, nature field recordings are some of the most difficult sound effects to capture. Finding pure wilderness locations is difficult. Atmospheres are constantly invaded by air traffic and distant delivery trucks. The sound of rural industry travels for miles and overlaps even remote conservation areas. Sonic purity seems incredibly elusive. And, when field recordists do find a few moments of peace, wind, rain, and snow make field recording a challenge.

Perhaps that is why it is hard to find knowledge about recording these tricky sound effects. A handful of weekend workshops introduce fans to wilderness field recording. However, the most precious soundscapes are beyond the reach of a weekend retreat. They require descending into canyons or hiking into deserts, or month-long expeditions deep into jungles. The process is difficult, and few have returned to share their experiences recording there. So, knowledge of how to gather these field recordings simply does not exist.

Thankfully, collecting sound from these stunning locations is within our grasp. Just last week a new guide was released to help you gather field recordings in almost every conceivable wilderness environment: Gordon Hempton’s Earth is a Solar Powered Jukebox.

Gordon Hempton is no stranger to readers here. He is one of the foremost pioneers of the craft of field recording. Many of us know Hempton through his superb Quiet Planet nature releases and his relentless vocation to preserve the pure sound of the wilderness. He wrote about this struggle with co-author John Grossmann in an earlier book, One Square Inch of Silence: One Man's Quest to Preserve Quiet. That described his journey field recording across America and his heroic efforts to save the sound of Olympic National Park in Washington State.

We had a chance to learn from Gordon in an interview earlier this year. Since then, Gordon and I have kept in touch. A few months ago he reached out to me about a new project he was working on: Earth is a Solar Powered Jukebox, his second book. He asked me to give his manuscript an extra pair of eyes. I had enjoyed Gordon’s writing before. I enthusiastically agreed. As I read through the draft, I realized it was a goldmine readers here would enjoy too.

Here’s a first look at that book.

What is “Earth is a Solar Powered Jukebox?” 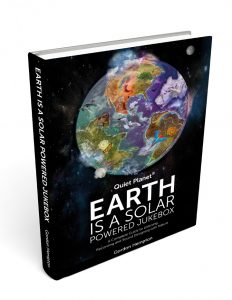 It is available in digital format only, and arrives in roughly 80,000 words in 17 chapters and 266 pages for $9.95. It is provided in PDF and digital online versions.

Those are the broad strokes. Let’s look at the book more closely.

An Overview of “Jukebox”

Jukebox begins by introducing readers to recording four forces of natures: winds, thunder and rain, flowing water, and rain. It then follows by exploring recording in 12 habitats (prairies, forests, wetlands, etc.). In this way, the skills learned from recording the forces of nature provide tools for field recordists to use in the habitats they learn about later. The last chapter, “Hawaii,” describes a unique environment with a mix of these places. This chapter is a great recap of the book. Hempton tidily brings all of the lessons together here as a “final exam.” 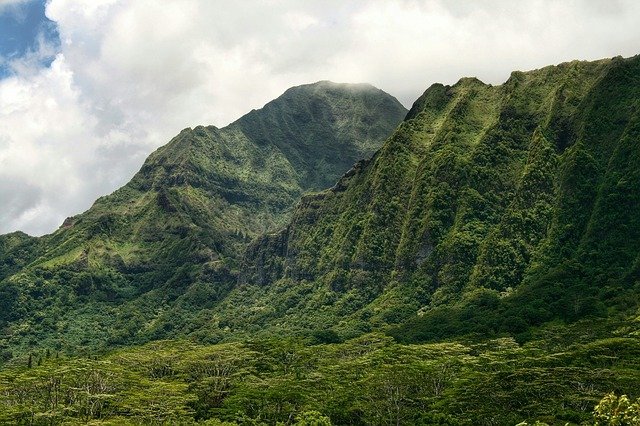 Fans of Hempton’s Quiet Planet sound fx library releases will recognize the chapter titles. Each one matches the name of the sound collections he has released (e.g., Flowing Water, Tropical, Deciduous). Because he has already released recordings for these themed chapters, he is able to share practical advice for recording and publishing work. Of course, he shares tips and tricks from field recording in the places. He also includes advice for sculpting the soundscapes into the releases he’s published.

Audio samples from his releases are sprinkled throughout the chapters. They appear as links to SoundCloud pages, or in the case of the online version, as players embedded within the HTML5 page itself.

Each chapter is split into two parts. The first part describes how to capture field recordings in each featured location. Hempton has distilled years of experience into actionable steps anyone can use. Generally, this part begins by explaining how to find a quiet place to record wind, waves, or forests. It includes many excellent photos and linked resources to help recordists navigate marine and flight traffic, contact conservation areas, and so on. These resources are invaluable; they give nature recording newbies an instant shortcut to sidestep some of the most troublesome issues of recording outdoors. 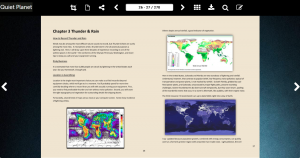 Jukebox then gets down to the juicy material. It describes what field recordists can expect in each environment, and why. In one example, the book explains the differences between wave types and also the hard science behind why they occur (e.g., tide, climate, meridian, season, etc.). In another, Jukebox describes which birds can be expected at what time of day, and why. It explains why they may be quieter in the later part of the year, and what animals will appear in other seasons.

That knowledge gives field recordists control even in these wild, unpredictable environments. The tips create a comprehensive understanding of these places and a clear edge for any recordist who wants to capture audio in the wilderness. He supplements this by describing the challenges one can expect, and how to avoid them. Many of these suggestions are a complete goldmine; they include tips never before seen elsewhere.

While he describes habitats on an informed, scientific level, Hempton believes in experiencing the atmosphere and recording emotionally. So, don’t expect a bullet-point list detailing how to mechanically record these places. Instead, the recording process is described viscerally, and emphasizes responding to the environment to gather the best field recordings. 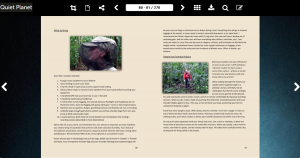 The book also includes gear suggestions. Strict microphone and recorder recommendations are avoided. Instead, the book includes tips for bags, desiccant, outdoor apparel, insect netting, GPS, and other things. That’s sensible, given that there’s such a range of choice for hardware that many readers may have experience with anyway. So, his gear suggestions are focused on equipment unfamiliar to field recordists which will make an incredible difference in places far away from the comfort of their studios.

Now, I had expected field recording tips when I began reading the book. What was a pleasant surprise were the fascinating suggestions in the second half of each chapter: tips for sound designing these locations. Particularly in later chapters, Jukebox breaks down each habitat into “layers” using “ecological pyramids” or “soundscape pyramids.” Each strata of the pyramid considers the amount and type of plants, insects, frogs and toads, birds, and mammals. Every layer depends on and builds upon the one before. It is quite a precise way of thinking about field recording, and it’s no surprise given Hempton’s studies in ecology.

These pyramids are invaluable for articulating the voices in the places. Generally, they’re presented to help sound designers reconstruct complex places like wetlands and forests and so on. Hempton guides readers through building each layer: plants will sound differently in autumn, insects will be diminished because of this, but birds will resurge. He shares how temperature and the time of day influence all of this. He explains that these ideas dictate what sounds should be heard due to “resource partitioning.” He also introduces the idea of the “auditory horizon” that places sounds in the foreground, middle ground, and background. It all combines to create a essential playbook for recreating an authentic environment from scratch. Of course, all of this is supplemented by links to field recordings readers can reference as they build their own soundscapes. 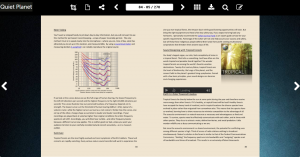 Audio players are embedded in the HTML5 online version

Hempton’s goal for the sound designing section is not simply to help editors build the atmospheres. The analytical approach was presented to help sound designers explain their choices to their clients, and teach them to understand those places more fully. While sound pros will certainly have years of editing experience, this section gives them tools to help communicate about their creations to others, too.

I also found the concept of designing these places helpful when thinking about field recording as well. Once you’ve considered a prairie through the lens of a soundscape pyramid, it’s easy to know what to expect when you record there. This helps with location, timing, and gear selection. In other words, the second half of each chapter teaches you how to listen in these places. Invaluable.

The Emotional Connection to Field Recording

Woven throughout all of these ideas and suggestions are entertaining stories of Gordon’s experiences. There are many fascinating case studies that give a pleasant diversion from the science and the craft. It’s quite impressive to learn how extensive Hempton’s travels have been. 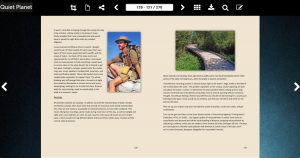 Jukebox doesn’t dwell on the science for too long, either. A common theme throughout the book is the importance of “emotional field recording.” Hempton emphasizes relying on one’s senses and experiences to capture excellent field recordings. As he mentions many times: “Feel, don’t think.”

So, while the book provides valuable lessons for field recordists to learn how to capture evocative sound effects and design them in the studio, it is also a book about Hempton himself. The depth of his passion for hearing sound and preserving it is felt throughout the entire book. It’s expressed most strongly in the touching epilogue.

In that way Earth is a Solar Powered Jukebox points towards a larger purpose of the book. Yes, it shares tips and tricks. It explains how to analyze environments. However, it also compels readers to consider the place they possess in the forests and the deserts. Or, as Hempton has written, to use field recordings for one of its most powerful goals: for “replicating the human experience.”

Learn more about Earth is a Solar Powered Jukebox.

Gordon Hempton has kindly offered a discount to CFR readers. Use discount code CFRQUIETPLANET for 20% off the book (and his sound fx collections, too).