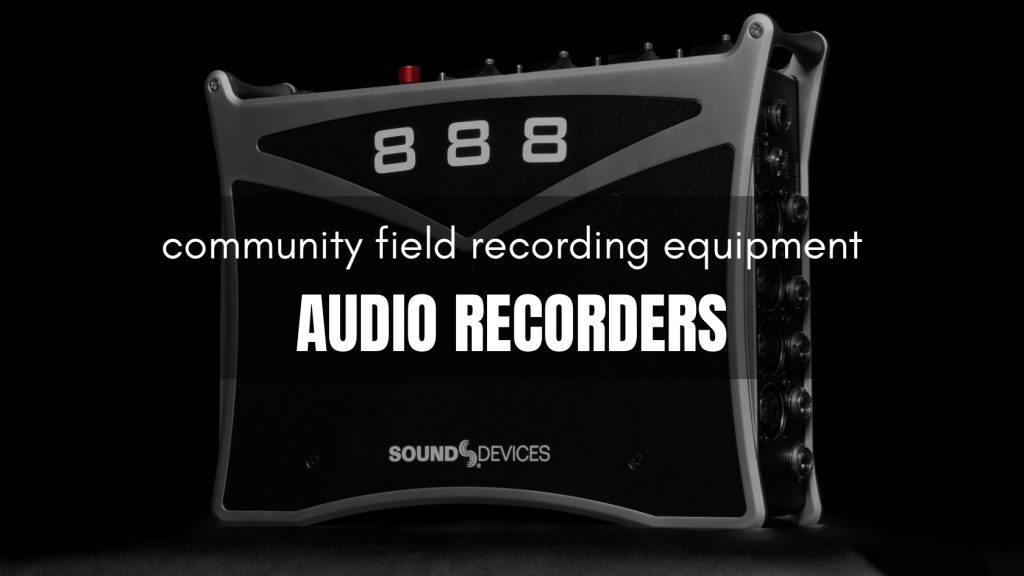 The posts last month taught us a lot about what gear field recordists use in the field. Those 23 interviews, as well as the 26 from the year before, gave us a comprehensive overview of what those field recording fans choose when capturing sound effects beyond the studio.

That series showed us how those 49 sound pros explore field recording. Last week’s post dissected their equipment preferences. Of course, there are field recording fans all over the globe performing the craft in their own way. I wanted to give everyone a chance to share their views. So, I set up a brief survey to learn what kit you use, what equipment you crave, and your advice for beginners. I curious to learn if pro choices matched the reality on the street.

Thank you very much to everyone who participated. And participate you did. There was lots of fascinating information, so much so that I’ll share your ideas in three, quick posts:

Looking to learn which is the best field recording gear for you? Check out the Field Recording Gear Buyer’s Guide for an update-to-date list of current equipment options.

One hundred and thirty five people contributed to the anonymous survey. On average, most people took around 8:30 to finish the 10 questions. I appreciate everyone taking so much time to share their thoughts with the community. As we all know, formal knowledge about field recording is not common. Your insight is invaluable. It helps everyone.

The first four questions were multiple choice. We’ll look at those today. Note that it was possible to select more than one multiple choice selection. For instance, the question, “Which portable recorder do you own?” allowed someone to choose both “Zoom H4n” and “Sony PCM-M10.” That means the total votes and percentages won’t add to 135 or 100% and aren’t meant to do so. Instead, they reflect the ratio of choices.

A lot of equipment choices are dictated by budget. Because of this, I wanted to remove budget from the answers. So, I allowed people to choose options that they wished for in addition to what they owned.

What was the result?

Which portable audio recorders do you own?

I wanted to start the survey asking about the most affordable equipment and grow from there. In the analysis post last week we learned that many pros began with portable, handheld all-in-one recorders with microphones attached. They later evolved their kit. Would the community mirror what the pros described?

Here is a pie chart of the total number of selections (click to enlarge): 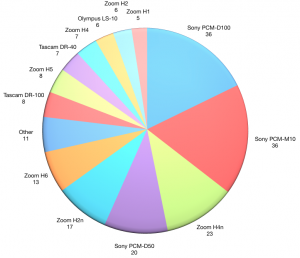 And here is their selections listed in chart form. It includes the total number of selections, and the percentage of responders who choose each recorder:

The responses were the first case of community results mirroring pro choices from the “A Month of Field Recordists” series. Sony has the most popular portable audio recorder. The elite PCM-D100 (discontinued, $850) held the top spot at 27%, match by the lower-budget PCM-M10. Zoom’s H4n (since discontinued, replaced by H4n Pro ($199.99) claimed the third place at 17%, followed closely by the D100’s older brother, Sony’s PCM-D50 at 15%. The top 5 was rounded out by another Zoom entry, the H2n (Price not available) at 13%. The H6 (Price not available), Zoom’s multi-capsule 4-channel offering held the final prominent place at 13% with the remainder of the list below 10% ownership.

In general, those choices matched the popularity of portables from the series. A few interesting observations:

What's the best thing about your favourite portable recorder?

Why do people choose their portable recorders? Here is a bar graph of people’s top features: 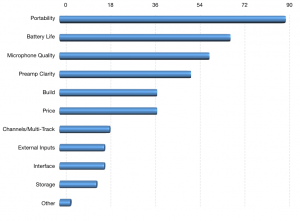 And here’s a chart of the number of selections and their percentages:

Unsurprisingly, the most popular choice is portability. After all, the point of these units is to be able to carry them easily and present them quickly to capture field recordings on demand. Two thirds of people valued portability.

Half of respondents cited a feature that to me was a surprising choice: battery life. People loved being able to power their recorders for a long time. I didn’t expect that. Don’t mistake me; substantial battery life is an important bonus. However, I can’t imagine a typical field recording session requiring so much time that batteries run out or cause a serious problem when recording. Most of my field recording shoots are about 4-6 hours, more than enough to record continuously and return to the studio to recharge. It seems like I’m an outlier, however. The community loves extended powering options or has longer, protracted sessions that demand sustained battery life.

This was a bit surprising given the options that followed. Microphone quality ranked third after battery life at 44% of respondents. These people valued the ability of the hardware to capture sound accurately with a broad frequency spectrum using a desirable pickup pattern. This was followed by preamp quality (38%). Together these two features contribute the greatest impact on the sound quality a recorder captures. Rounding out the top five was a tie between build and construction and price at 28%.

The implication of the top six favourite features was interesting: portable users are more concerned with using a recorder a lot than the sound quality the unit produces. Valuing portability and battery life highly implies they want to carry the unit easily and use it often. While I believe sound quality is highly important, the choices suggest inspiring behaviour. People are going outside recording, and recording a lot. That matches the target market: portables are priced comparably lower than dedicated recorders. That encourages beginners to start experimenting with sound. At that point in their practice, sound quality is not as important as simply experimenting with field recording and doing so often. And, while portables are lower-priced options compared to studio gear, affordability wasn’t as critical as the ability to simply just head out and record.

Which dedicated recorder do you own? 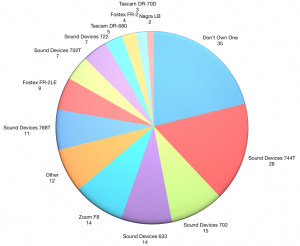 And here is a chart of the same information:

Well, over a quarter don’t own one yet. In a way, that makes sense. These units are pricey, with most priced over $1,000. But, for those that do have the needs and means, which is their first choice?

We again see parallels with pro responses from the series. Sound Devices recorders are the most popular, with the 744T taking the lead at 22%. The least expensive offering, the Compact Flash 702, follows at 12%. Both are no longer available (although often still appear on the used market), and have been in many ways replaced by the MixPre-3 II ($752) and MixPre-6 II ($1,350.99) . The 633 ($3,575, discontinued) is an integrated mixer/recorder that has been generating a lot of buzz. It slid into the next spot at 11%. This was matched evenly by Zoom’s premier pro recorder, the 8-track F8 (as mentioned, updated to the F8n ($1,099.00)).

What's the best thing about your favourite dedicated recorder?

Why do people choose dedicated recorders? You would expect that people choose these units for reasons different than portable recorders. And you’d be correct.

Let’s look at a bar graph of their selections: 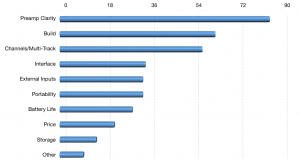 And a chart of those choices:

Preamp clarity was the overwhelmingly most popular choice, with over three quarters valuing this feature. That makes sense. One of the major defining features between portables and dedicated recorders is the ability to pack elite hardware into their chassis. Since dedicated recorders are designed to produce better sound via their preamps, people select them for that reason. One could also make the assumption that if owners are willing to invest thousands of dollars into a dedicated recorder, it better have the sound quality to match.

Build and form-factor construction was rated quite highly as well, at 57%. The ability for the unit to support multiple tracks (i.e., beyond stereo) was also in demand at 52%. How well a field recordist could use a the unit (i.e., interface) was rated just as highly as portability. Battery life followed shortly behind (27%), with price and storage trailing after.

To my eye, these choices seem to align with what pros mentioned during last month’s series. The community selects dedicated recorders for longevity; giving a high importance to build indicates that people want a sturdy unit that will provide for them for a long time. The relatively high ranking interface selection would align with that. People plan on using these units for a long time and as a result want them to be a usable, user-friendly tool they use often.

Interestingly, the importance on multi-track suggests that field recordists are capturing more complex shoots with multiple channels and microphones. That makes sense given that the 744T and 633 were popular choices from the previous question.

Some intriguing “Other” features included: Neverclip + MARF, DSD128, and digital signal paths from other units.

Next up: a look at community microphone choices and favourite kits.

Please note that this article is not a list of endorsements or recommendations – after all, there’s no way I could personally test every model listed here! Instead, the post is intended as a handy list of options you can explore yourself. It’s always best to rent and test field recording gear before making an investment, if you can.