You are here: Home / Gear / A Month of Field Recordists: Stosh Tuszynski 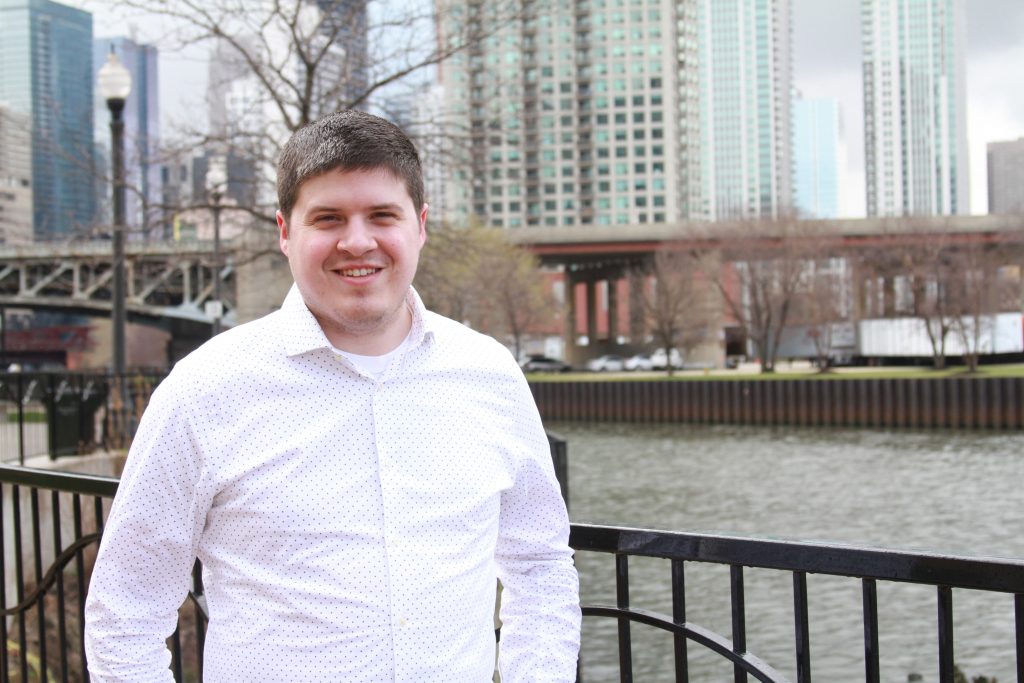 What skills are required to become a field recordist?

You may think it is a thorough knowledge of acoustics. Perhaps it is a complete familiarity of equipment and signal flow. It could be a network of contacts that allow you access to precious field recording subjects.

Yes, all of those skills combine to help a sound pro capture excellent sound effects.

There are other, less obvious skills needed to capture field recordings. Today’s guest reveals another talent successful recordists require. In today’s post, Stosh Tuszynski reflects upon the differences between recording designed effects in the studio and gathering ambiences in the streets of Chicago. He describes how his field recording craft has evolved, and details his carefully considered minimalist kit. And, most importantly, he shares with us a unique experience capturing an iconic sound from the Windy City that illustrates a hidden, yet important skill every field recordist requires: balancing opportunity with patience.

Creative Field Recording: How did you begin working in audio?

Stosh Tuszynski: This has always been a tough one for me to pin-point! I suppose if I start from the VERY beginning, it all started when my mom forced me to take piano lessons as a kid. I was a terrible student, but those classes led me to an interest a musical creation. Fast forwarding about 10 years, I went through a phase I think a good amount of people in my field went through, where I thought I was going to be a great computer musician. While I can look back and sort of chuckle at it now, I guess that's what got me into my first pieces of audio software.

The music thing went stale after a while. I stayed out of audio for the most part until I had to make a decision about what I was doing for college. I had no clue what to do, but my girlfriend had mentioned Columbia College Chicago as they had an audio department. After looking into it, I found out they had a specific "Audio for Visual Media" major. I think at that moment it clicked that there ARE actual careers in audio. I had always watched the behind the scenes stuff for films and video games showing how the sounds were created. I thought it was all very cool, but for some reason I never thought about it as a career path.

I think going to the Columbia open house is what really solidified my decision to get in to audio. I met alumni and teachers working in audio and realized how much I would love to do it for a living, so I enrolled. About two years into school I landed an internship at NoiseFloor, a great post audio studio here in Chicago. A friend who was interning there recommended me, and apparently I fit the bill! For almost a year I joked that they'd have to pay me to leave. Eventually I convinced them to pay me, but I haven't left yet 😉

I think me getting into building sound libraries was bound to happen sooner or later. I don't think there's a single project or client I've worked with where I haven't implemented my own personal recordings. There's something about using my own material that is just crazy gratifying to me. So, in doing that, I amassed quite a collection of unique sounds that I held all to myself. I eventually realized my love for recording could also benefit others in the same field, and I've found sharing my sounds just as gratifying.

CFR: What was your first field recording? What prompted you to begin recording "beyond the studio?"

ST: I think my first real SFX recording was inside the elevator of my first apartment building. I borrowed a friends Zoom H4n for a class project but wanted to test it out on some quieter sounds first. I never realized how ominous my elevator sounded until then.

It's funny… I didn't realize until just now I must've recorded that in mono. What a n00b! Either way, that recording and the ones that followed it enticed me into purchasing my own Zoom. The rest is history!

CFR: Your recordings have bridged real-world sounds, as well as more designed creations. Those are subjects are recorded quite differently. Can you share with readers your thoughts on recording both designed and real-world subjects? Do they require different skills? Gear? Anything you learned for those different sessions?

ST: To state bluntly… recording in a controlled environment is quite a bit easier! While both require proper planning to be successful, libraries like rOtation are so much more controllable in that they are personal performances. I'm the one who spun the Hurricane Balls. I'm the one who twirled all the magnets. I lit off the fireworks… It's just a much more controlled experience. If I don't like the sound, I can change my performance/prop/location/whatever.

When it comes to naturally occurring real world sounds, you're kind of at the whim of the world around you. Just because you want to record those planes over head doesn't mean the birds and insects will agree with you, or vice versa. You can plan as much as you want but there's always the chance of variables that can hurt (or help) your recordings. All that isn't to say I don't enjoy real world recording. In fact, I think I enjoy it the most! It's just a bit more labor on all ends. Which is why I'll always consider my libraries a labor of love, especially my next one!

I guess I've learned two things: 1. You can never plan enough. 2. No matter how much you plan, things can go wrong. Just try to be prepared for anything and take your time… you can (almost) always try another time!

CFR: What is your favourite gear?

ST: I’m a big fan of minimalism. When I first started picking out my own gear it was important to me to not be carrying around a bunch of stuff. The more gear/cables/bags… the more arduous the procedure, and a greater chance for something to go wrong. M/S recording seems to have been my calling recently. It's just nice to be holding one blimp and capture a very versatile recording. I'm really digging my Oktava MK-012's right now. They have their pros and cons, but I love how flexible they are. With just two microphones and a few capsules I have a huge number of recording possibilities. I can do M/S, AB, XY, Figure-8, or just have two nice directional mics.

Like a lot of other recordists, I love Sound Devices. I have a 744T which has served me very well with just about everything I throw at it. You can't beat the pre's and it's a rock solid reliable recorder. It hasn't failed me yet!

My DAW of choice is Nuendo, but Reaper has been creeping it's way into my life!

With all that said, if I could upgrade right now I'd buy a pair of Sennheiser MKH-8040's and a MKH40/30 combo for M/S. Guess I've got to sell some more libraries!

CFR: Why do you prefer this gear, as opposed to other equipment you have have tried?

ST: I’m very lucky in that I have access to a good variety of mics/equipment at work. While I've definitely taken advantage of this, like I mentioned above; I like to keep things simple. I'm sure I can come up with another "simple" set up with other mics, but I know my current base set up in and out. What I can and can't do. So many people say this, but I really think the best mic is the mic you have on you… so you better know how to make it work for you!

CFR: Can you share with readers a favourite field recording experience, or a favourite sound you've captured with this kit?

ST: Some guys from work and I recently had the chance to record the Michigan Avenue Bridge in Chicago being lifted. That in itself is cool, but the really neat thing was we had private access to inside the bridge house where the massive gears crank away to perform the lift. Now, we we're recording this for a mobile app… but me being me, I decided we should go all out. When else do you get an opportunity like this? 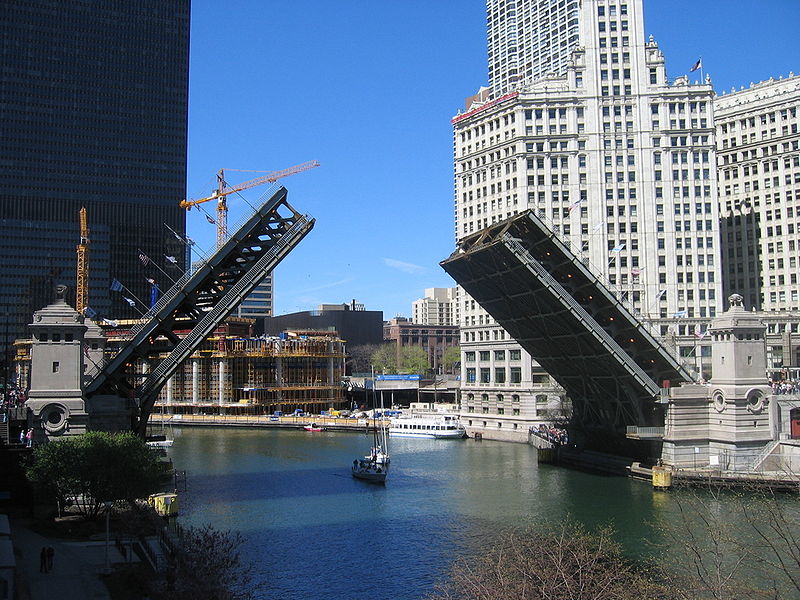 So, I was inside the bridge house with a 744T holding my trusty Oktava M/S rig and two Barcus Berry 4000 contact mics. It was nice to have a hand held M/S setup since I didn't quite know where the sound would be coming from. I attached the Barcus Berry's to the protective gates around the gears, hoping to capture some nice crisp mechanical movement. Outside, we had a 702T and two wide spaced DPA 4006-TL omni's to capture the bellowing rumble and groan of the bridge. All at 192kHz/24bit, of course 😉

We we're all set up just in time for the lift, but then there was a problem… The bridge was broke.

That's right, someone broke Michigan Avenue. The bridge wouldn't budge. Something was seizing it up and the engineers in the bridge house with me couldn't seem to figure it out. The problem with troubleshooting a bridge like this is that each time you want to try a lift, you have to stop traffic on one of Chicago's busiest streets. You can't try anything for too long before traffic has to be allowed through. So, for about 3 hours we hung around hoping the bridge would move. We were about ready to call it quits as it was getting late. But, we decided we'd wait it out for one last attempt before we left.

Sure enough, it went right up!

It's a very cool sounding sequence of events when these bridges are lifted:

Massive locking pins are pulled out…

The small electric motor lets out a faint whine…

The gears slowly pick up speed to vibrate and clatter…

Meanwhile the bridge groans as it moves from it's resting state…

…also some guy decides honking at the bridge as soon as it's open will bring it back down. Remember what I said about real world recording!?

Anyways, I don't know if it was the sound itself, the experience, or the relief that the bridge finally moved… but it's easily one of my favorite recording experiences I've had. Full of ups and downs… bridges and emotions!

Thank you to Stosh Tuszynski for sharing his kit and experiences with us today.