You are here: Home / Gear / A Month of Field Recordists: Matthew Marteinsson

The field recordists in the first series of interviews were 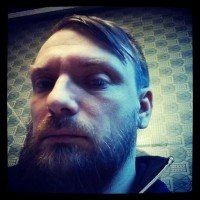 sound pros originating mostly from one specific discipline: post-production. Of course, recording sound effects beyond the studio isn’t limited to television or film. I attempted to explore beyond that by inviting sound pros from other interesting careers that sculpt sound clips: theatre sound designers, wild-track fetching dialogue recordists, sound library producers, and more.

One discipline that didn’t get much love the first time around was game audio. While I’m fascinated by the industry, I know very little about it, and as a result, it hasn’t been well represented here on the blog or in the first round of field recordists.

Today’s field recordist is here to help. Matthew Marteinsson generously agreed to speak about his experience field recording for game audio. Many of you know Marteinsson already. He is a well-respected professional game audio sound designer. He hosts the popular Beards, Cats and Indie Game Audio podcast with Gordon McGladdery. He has shared his wisdom about game audio in many articles and interviews, including on Designing Sound and the Tonebenders podcast.

We’re quite fortunate to have Matthew join us in this series. Today, he describes how his career evolved from post to game audio. He offers a fascinating perspective of how field recordings fit into the arc of game audio development, how he tailors sound fx for his projects, and the kit he uses to get the job done.

Creative Field Recording: How did you begin working in audio? Why did you choose sound?

Matthew Marteinsson: I started out recording music. Worked with bands as well as music for film, TV and advertising. I did a little bit of cutting sound effects at that time but the majority of my work was with music. I went down that path after focusing all through high school on playing jazz. I really loved music but knew I didn’t have the dedication to be a professional player. But in there I found out about being on the other side of the glass and decided that was for me.

CFR: At what point did you decide to focus on game audio? What inspired you?

MM: I kind of fell into game audio, I feel like. I was having a dry spell as a recording engineer so I took a job as a video game tester so I could have a regular paycheque for awhile. While doing that, I ran back into someone I had gone to recording school with who put me in touch with a team that needed a junior audio person right as my QA contract was expiring. Once I started in on it, I fell in love. For me, game audio is the perfect mix of technical and creative. I got inspired by the problems and limitations you were forced into while trying to create a believable compelling world for a game.

CFR: What was your first experience field recording?

MM: I honestly don’t remember my first experience. It was probably recording with a portable cassette deck back when I was in school for recording. Just recording things that sounded cool for “found sound ” kind of music. The first time using “real” gear probably wasn’t till I was at EA doing games. I didn’t get to do a lot of the cool recording trips due to the teams I was on or when I joined them in the development cycle. I got more into field recording as I went freelance and was more in charge of my time and resources.

CFR: Are field recordings a common part of your toolkit when working on Klei titles?

MM: Definitely. We probably do more in-studio recording vs. field recording but recording fresh content is constantly going on. We have a recording room at Klei so for much of the stuff we do it’s almost faster to record exactly what you want than to search libraries, so stuff is getting recorded almost every day. Our field recordings usually take a little more planning but still happen fairly often. Usually we’ll be keeping a list of things that we need that we can’t do in the studio and/or we don’t have the right library for and it’s within our realm to record ourselves. We happily use libraries all the time but if we can do it ourselves it’s just a little more exciting to work with our own sounds if we can. I know most commercial libraries will be using better gear than what we have but getting exact performances of what we want and the fun can make for better end results.

CFR: You’ve mentioned you’ve worked in post earlier in your career. Game audio is a considerably different craft. What tricks or tips do you use to ensure that your field recordings fit perfectly for game audio in particular?

MM: The biggest thing I do for game audio recordings is variety and usually lack of perspective. Game audio generally needs way more variety than traditional post. If there’s a branch rustle, we need 20 of it, not 1. We’re usually building things with our game engine/middleware as well as our DAW so building a soundscape that doesn’t sound repetitious over hours of gameplay requires a lot of variety. The lack of perspective is because almost all of that gets handled within the engine/middleware. Usually if something has some space and distance on it, I need to take that off. I generally want closer recordings so I can build the perspective later. The exception to this might be that I’m creating a system that uses different files at different distances and if I have the right environment I would record those. But that sort of thing is rare for me.

I’m also always looking for sound I can loop and build from so I make sure I’ve got long steady recordings I can build loops from later. This comes out especially for ambiences, cars, and machines. As well “bys” are usually no use to me so I don’t bother with those. That’s something that the game engine will handle. Really, if I’m doing anything with a car I’m looking for loops. Lots of loops at different speeds and RPMs.

MM: My favourite is whatever I have on hand when a cool sound is going on. Any recording of a cool sound is more useful than the one you missed cause you didn’t have your gear with you. I’ve used sounds from a Zoom H4 (the first gen, not even a H4n) and cell phone recordings in award winning games. If it’s the right sound it really doesn’t matter where it came from. Not that we shouldn’t strive to have the best gear that we can. 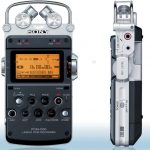 I do love Sound Devices recorders and all the same mics everyone else does but I don’t own any of those. My personal rig is rather modest. I have a Sony PCM-D50 that’s pretty much always with me. With that is my BSM–9 mics from Microphone Madness. It’s a stereo set of little omni mics that are aimed at binaural recording. They don’t look like much but have clips you can use to put them lots of interesting places. And cheap enough I’m willing to put them in dangerous places. They’ve really surprised me and have ended up using them a lot. If I’m going out to do a “proper” recording trip I’ll bring my Røde NTG2 in a Røde Blimp. Because it can run on a battery I can use it plugged into the D50 without a XLR input. 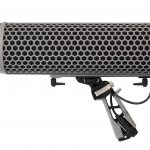 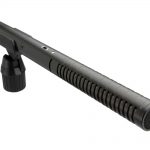 As well, when I do a proper field recording trip I’ll partner up with 1 or 2 other people so we can pool our gear and get more stuff recorded. Most of the time we’re still recording guerrilla style so more people than that brings more attention. Thankfully, at least in BC, you don’t need permits to record audio in places like public parks. If there was video you would.

CFR: Why is it your favourite, as opposed to other equipment you may have tried?

MM: Really, my D50 and BSM–9 mics are my favourite because they’re what I have. I been using them together for long enough now I feel I know what I’m going to get. I can get good usable sounds and do so with a fair amount of stealth. Most of my field recording is unplanned or just exploring a public space. So being able to remain low key and under the radar of people is key. And I really like that the BSM–9’s are small and can be dangled into spaces I wouldn’t normally be able to put a mic easily.

MM: First thing I thought of was a crazy toilet in a hotel I stayed at once. If I didn’t always traveled with my recorder I would have missed it. When flushed it sounded like some sort of creature scream. So before leaving my girlfriend had to wait for me while I sat in the bathroom with the lights off (was humming from the bulbs) flushing the toilet about 15 times in a row.

The other time I thought of was recording a traveling fair with Gord (@ashellinthepit) my podcast co-host. He was having trouble getting access to the local large amusement rides that he needed sounds for working on Parkitect. I did some googling while we were talking about this and found the regional traveling amusement an hour drive away the next day. And the last day of their summer tours. So geared up and went in guerrilla style. Thankfully got little interest in use wandering around with headphones and handheld recorders. And when we did, one of us was able to talk to the interested people and the other moved away and continued recording. Even had the air gun game guys dug what we were doing and fired off some pellet streams for us. So, being low key and polite let us get a bunch of really usable stuff. And scored a train pass by the same night/location. Always be ready to record anything.

Thank you to Matthew Marteinsson for sharing his experiences with us.