As field recordists, we all know that venturing out of the studio to capture sound effects takes thought, effort, and skill. Weather, network demands, and milestone deadlines highlight another challenge: time. Superior field recordings are diligent and comprehensive; neither aspect can be rushed. That’s a shame, since sound fx editing becomes easier when pros have multiple variations of similar sound clips. It just isn’t possible for a single recordist to gather ample variety on the tight schedules that are becoming more common in pro audio. So, how can someone stretched for time beat this problem?

One increasingly popular way is crowdsourcing. This approach combines the efforts of an entire community of skilled pros to create something bigger than a single field recordist can accomplish themselves.

Field recordist and sound designer Tim Prebble was one of the first sound pros to champion a crowdsourced sound fx collection. That became the respected "Doors" sound library of 2010.

Since then, there have been a number of other fx-themed crowdsourced projects: René Coronado’s trolley library and the Free Firearms library by Still North SoundFX used Kickstarter to help overcome the financial hurdles of creating a sound collection. Both Mike Niederquell’s Audible Worlds forum and Michael Maroussas’s The Sound Collectors Club draw from community submissions to create theme-based sound libraries. Just recently a new crowdsourced library website was launched with a compelling twist: CrowdsourceSFX.

Today’s article will explore this community project and its website. The post will explain how you can become involved in this intriguing new crowdsourced sound library, and how it can keep giving back to collaborators, years after their first upload.

I’ve always been intrigued by crowdsourced sound clip libraries. Part of that has to do with the strong, supportive field recording community to which we all belong. I also like the implications of gathering a group of craftspeople together to create: it guarantees variety, propelled by a chain reaction of inspiration. And, unlike standard sound fx bundles, it removes the guesswork that plagues clip creators before sharing their first bundle: will people want their field recordings? Will the collection be successful? In contrast, a crowdsourced sound library will always be successful simply because it involves so many likeminded sound pros.

Let’s not forget that crowdsourced sound libraries are excellent way to emerge from the isolation of our editing suites. It’s an opportunity to meet and learn from participating sound pros worldwide.

I wrote a bit about these ideas in an earlier post if you’d like to read more.

So what’s different about CrowdsourceSFX? Well, it is similar to other crowdsourced collections, with a new spin. As you’d expect, contributing recordists share their work with each other. For example, you may upload five interesting door recordings. After the project completes, you’ll receive every other sound pro’s door recordings, too. So, by contributing a little, you’ll receive an exponential amount of field recordings in return.

As if that wasn’t appealing enough, CrowdsourceSFX adds a novel twist: the website will then make the sound library available for purchase. A portion of each sale will be paid to every recordist who contributed to the collection. How, precisely? Well, the project has puzzled out a sophisticated yet fair method of dividing the royalties of each sale. That method, like the site itself, is well thought out and cohesive.

The project is spearheaded by Canadian field recordist and sound editor Paul Col. I asked Paul if he would like to share the idea behind the project in a Q&A. He kindly agreed.

Creative Field Recording: Can you tell the readers about yourself and your first experiences field recording? 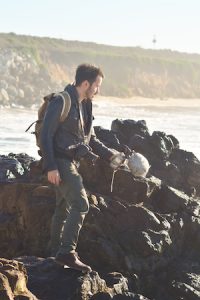 Paul Col: I first started field recording in 2013, mainly as a way to supplement the projects I was working on with custom recordings. I was working as an assistant sound editor and although the team I was working with had a vast and diverse sound library, each project had some highly specific sonic needs that weren’t always covered in the library. So I initially got into field recording as a way to meet the needs of a production, but soon after I got caught by the the thrill of chasing unique and peculiar sounds.

Thankfully my friend and mentor Martin Pinsonnault let me in on many of his field recording tricks and strategies to get me started, and since then I’ve made around 1,500 personal recordings, many of which I will be including in CrowdsourceSFX’s libraries.

CFR: Can you give us the elevator pitch for CrowdsourceSFX? What is it?

PC: CrowdsourceSFX is a hub for crowdsourced sound effects libraries. By contributing your recordings to a theme-specific library you gain access to that entire collection. These libraries are then made available for sale to non-participants, and the profits get returned to the contributors as royalties.

CFR: CrowdsourceSFX appears inspired by earlier crowdsourced libraries. What crowdsourced projects have you enjoyed contributing to in the past?

PC: The first crowdsourced library I contributed to was the ‘World SFX: Our Ambient World’ library in 2013. For me this was a game changer. It struck me as such an ingenious way for sound recordists to pool their resources and communally benefit. I was amazed at how one of my recordings could magically be turned into 200, and at how diverse and unique the final library was. 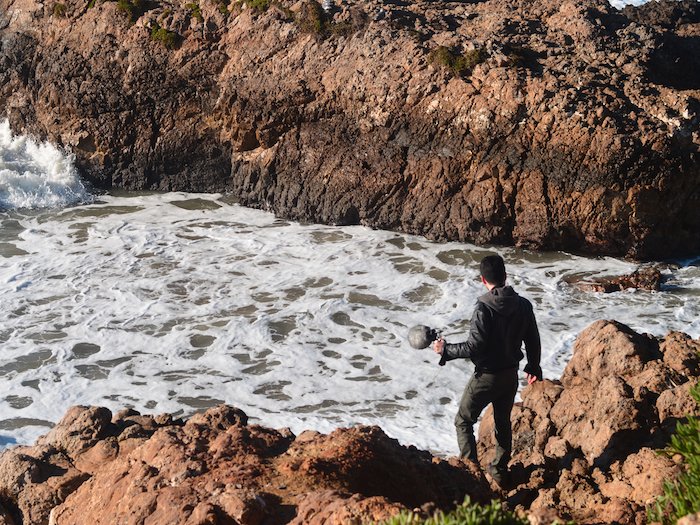 CFR: Why did you create CrowdsourceSFX?

PC: A few months ago I was searching the web for some sounds for a project and I came across a crowdsourced library from 2010 that was exactly what I was looking for. After doing some research about how to get my hands on it I learned that due to a lack of permissions it was basically impossible, and even though I was willing to pay for it I wasn’t actually allowed to.

CFR: Why is the crowdsourced model your favourite method for building sound libraries?

PC: I think the crowdsourced model is so appealing to me because of the way it rewards teamwork and co-operation. Especially as an independent sound editor with a limited budget I find it to be a fantastic way to multiply the sounds in my library, for free.

CFR: Can you introduce the website’s current themes?

PC: There are currently three CrowdsourceSFX libraries that are open for contributions:

I chose these themes for the first libraries mainly because I always find myself struggling to find sufficient, high quality sounds in these areas. They are also themes that most recordists are likely to have personal recordings of, so by pooling all of our sounds on these topics we can all be better equipped for these editing challenges in the future.

CFR Note: the submission deadline for these themes April 30, 2016.

PC: I think that the best sounds, and by extension the best contributions, are the ones that are unique to a recordist’s personal circumstances. Rather than trying to find a sound that fits the generic description of a library I would instead encourage trying to find sounds that are particular and special in some way.

For example, one of the door sounds I’m contributing to Door Creaks & Beyond is of a door in my mother’s house that doesn’t quite fit over the carpet in the room, so it gets jammed every time you open it and makes a distinctive frictioney sound followed by a huge rattle as it breaks loose. It may sound silly, but I ended up using it in a film to sell the idea that the character’s house was cheaply renovated. I’d love to hear these kinds of ‘personal’ sounds from recordists.

Also, for participants who would like to have their name/link/logo listed as a contributor on the library’s final product page, you are welcome to send me your information along with your submission.

CFR: How can people stay in touch and receive updates about the project?

PC: The best way to stay up to date with future updates is to subscribe to our mailing list (in our website’s footer), or if you prefer more bite sized updates you can find us on twitter (@CrowdsourceSFX).

CFR: What can we expect from the site in the future?

PC: A lot more crowdsourced libraries! Ultimately, the project will grow proportionally to the amount of participation from the field recording community. Ideally I would like to have 3 libraries open at any given moment; I think that would be a great way for people to very quickly build or enhance their personal libraries! 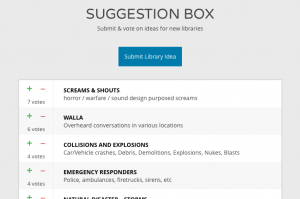 Also, the themes of all future crowdsourced libraries will be user submitted and determined by popular vote, so if you have an idea for a library that you would like to see you can submit it on our homepage, and you can cast your vote on existing ideas.

Many thanks to Paul Col for sharing his new website with us.