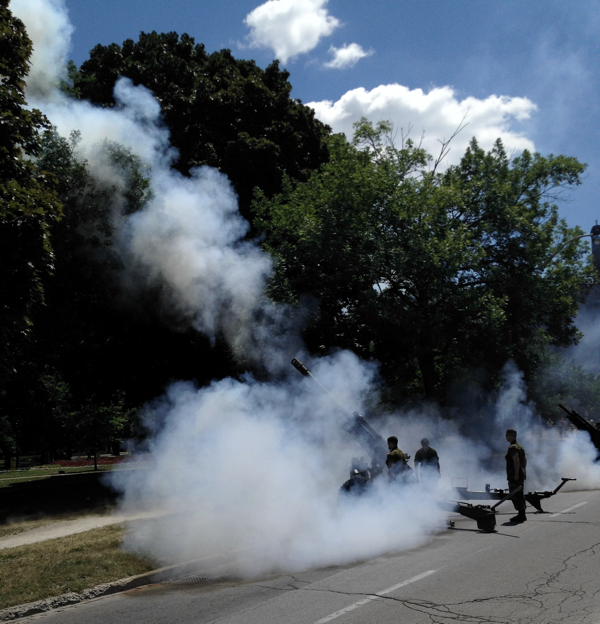 I was walking home one day when I heard a tremendous boom shake the high-rises of downtown Toronto. It repeated relentlessly, and seemed to intensify with every blast. I detoured, and found three howitzers firing shells deep within the caverns of the city.

What I did not expect was that moment would lead to a five year field recording journey.

Today’s post will share how I brought these sound effects from concept, field recording, mastering, curating, to publishing over a half decade. How can this help you? A few ways:

The Concept: Capturing an Environment 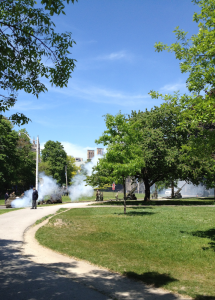 Howitzers, of course, are military field artillery. They are stunning to see in action. Sound is only part of this. The guns bucked and leapt wildly with each blast, indicating incredible power. Witnessing these weapons makes one imagine what the actual chaos of war must be like.

I usually prefer to record atmospheres, but I was intrigued by the guns. The howitzers were fired in the middle of downtown Toronto. That meant the blasts echoed off high-rises there. The surrounding university and government buildings were stone. Glass façades would be bright and brittle. The stone muted that, and instead conveyed a cool rippling boom. Combined with the way the ground rolled during each shot, this flowing reflection made the blasts seem especially huge.

So, I was more interested in the reflections than the gun themselves, actually.

When I stumbled into the howitzers, I had no idea why they were there, and if they would return. So, I began with research.

That wasn’t easy. It was simple to discover that they were there to celebrate Canada Day. Info about the guns themselves, who was working them, and if they would return was more elusive.

I peeled back a layer using a suggestion I mentioned in my book, Field Recording: From Research to Wrap: trade websites. A handful of raw websites tracked historic artillery (who knew?). That gave me the basics. It also revealed that the guns actually moved around Ontario and “performed.” That gave me enough info to approach one of the fusiliers manning the guns at the next event. After all, speaking with a pro themselves is always the best bet.

I learned that the guns were managed by the 7th Toronto Regiment of the Royal Canadian Artillery, stationed in the downtown Moss Park Armory.

I learned the guns fired a 21-gun salute. They used three different howitzers: a 88 mm 25-pounder, a C1 105 mm, and a C3 105 mm. The C1 and C3 are modified versions of the American M101A1 field piece. The solider described the differences, and showed me how to spot them. 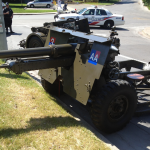 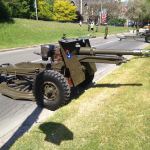 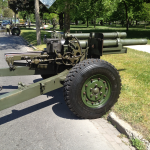 I was set. I knew all the information I needed to get started: when they guns would fire, what they were, and how they differed. Now all I had to do was record them.

That wasn’t easy. The howitzers fired in Queen’s Park, in the center of Toronto. That brought the typical problems of urban environments: traffic, voices, and crowd. A subway line rumbled beneath the area. Surprisingly, birds weren’t scared by the blasts, and blissfully chirped throughout the entire salute. To make matters worse, a carillon nearby rang over some takes.

The soldiers also restricted access during the blasts. And, while general access was easy, the guns themselves were beyond my control. I couldn’t order the regiment to fire the howitzers at my command. That meant I couldn’t isolate any of the blasts.

There were benefits, though. In a surprising and exciting twist, the military blocked off all traffic surrounding the park. And, of course, I knew when the guns would fire. So at least that aspect was predictable.

I wasn’t deterred by any of this. However, I didn’t know when I started that it would take five years to collect enough decent material.

I used a variety of microphones. The Neumann 191 is rich, and captures full bass without being loose. I added a few other portable recorders (Zoom H4, H4n, and Sony PCM-D50) as backup. I aimed the microphones not only at the guns, but at the reflections as well.

Over the years I adjusted my position a bit. Sometimes my focus was about 10 meters from the guns, at other times 30 meters away. It usually depended upon how persuasive I was convincing the soldiers to allow me to place the microphone around the howitzers. 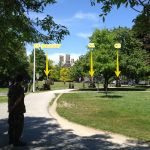 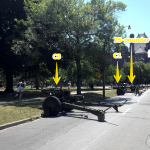 Now, the first thing you should know about mastering howitzer sound clips is that they are overwhelmingly loud (naturally). That means to capture the blasts without distortion, you must focus on the loudest part of the sound. It also means that everything other than the shot will be far quieter.

The result is that the recordings sound like a short pop. The audio has a sharp spike, and then drops off a cliff. The original recordings initially sounded less than impressive. That’s actually typical for sounds with a such a drastic dynamic.

While the tail of the sounds were quiet, birds, voices, and carillon bells remained faintly audible. That forced me to omit two thirds of the takes. I was reluctant to delete such rare recordings. But, like I mentioned in an earlier post, it’s better to be fully confident in a collection of superstar-only tracks.

I lined up all recorder channels, cut them together, and brutally excluded any blasts that didn’t completely impress me. Not every session from the five years came together sufficiently, so I used takes from different years to compliment each other.

In the end, I was satisfied. I was happy that I managed to capture the reflections. However, the blast itself didn’t have much more than a snap before falling flat on its face.

Now, I usually prefer field recordings with minimal processing. However, I knew that for the howitzers to succeed at all, they would need more work. 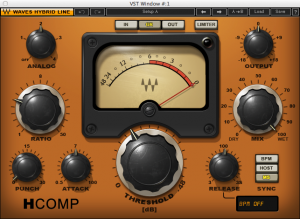 I realized I would need to process the howitzers to give them power. Plug-ins like H-Comp, Transmod, and Waves L2 would do the trick. Since I record atmospheres, those plug-ins weren’t in my toolbox at the time.

So, I turned to a friend and an expert at mastering guns and explosions: Frank Bry. Many of you know Frank from his blog and web shop at therecordist.com. Frank has recorded machine guns, handguns, and explosions. He has written about working with explosions for designingsound.org. I approached him and asked if he had time to work on the artillery. He did.

Frank worked his wizardry. His processing pulled life out of the howitzers, and gave them power and crunch. The tail of the recordings became more present. It brought out the emotion in the guns.

The artillery now had power. Now, instead of focusing on the blast of the howitzers, I turned my attention to the tail of the clips.

I ignored the initial blast, cranked up the gain, and listened to the reflections and tail. Some takes had faint bird chirps or voices. I delicately sliced those out, or used iZotope RX’s Spectral Repair to lift them away. I carefully extracted noise with EQ or RX’s Denoise module.

The guns were arranged in a fan. That made some lean to one side or the other. I corrected that by gently nudging those side-heavy takes more to the centre.

With all the takes ready, I designed a few bonus tracks.

I’m a big fan of the HBO series Band of Brothers. I watched a few scenes to learn how the sound designers cut and mixed WWII artillery in that series. Two scenes in particular stood out.

The first is in episode two, “Day of Days,” when Easy Company takes out German gun emplacements at Brécourt. The series mentions that the guns are 105 mm, which match the calibre of the C1 and C3 howitzers. Here’s the scene. A second scene from episode 6, “Bastogne,” features a German artillery barrage.

The howitzers I recorded sounded a bit different than those in the series. Mine were sharper, and more present. So, I processed a bonus version of the howitzers shots that matched the Band of Brothers style, which had a softer attack. 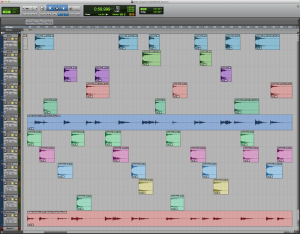 Hearing the guns live conveyed an evocative sense of being under a military bombardment. I wanted to recreate that in the files. My goal was to make it seem as if listeners were in the middle of a war. I wanted the recordings to focus on “the ambience of war.”

So, I also arranged the takes into a larger composition that portrayed a “battlefield” track. I gave options for busy, regular, and light battles. I placed the guns in the medium distance, the far distance, and also combined them both. I created a 5.1 version of these tracks, and stereo mixdowns. Using Audio Ease’s Altiverb, I created an “interior bunker” perspective, and a few others.

Preparing a sound library for publishing is one of my favourite steps. The first task was labelling.

I used my research to precisely identify each of the howitzers. I described how the guns were arranged (distance), and gave each shot an emotional, evocative name. I embedded extra info in Soundminer metadata. I also wrote a “Spec Sheet” with details about how the sound was recorded, and why. That joined photos from the shoot. The Spec Sheet would help editors understand the context, purpose, and other detail if they wanted it. 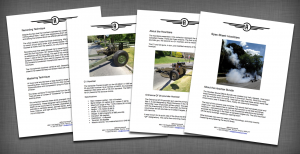 Finally, I arranged those takes. I separated the main clips from the “sweeteners.” I also tucked the processed tracks into separate folders. I wanted to be clear what was processed, and how.

Here is an original recording of the howitzer firing sound clip. Notice that while the reflections are interesting, the blast is limited to a brief “pop.” Note: turn up the volume to get a good sense of the power of the howitzers. Just watch your ears.

Here is a howitzer shot sound clip after Frank Bry’s compression and transient modulation work. Notice the increase in presence and power.

Here’s the same shot treated with a bit of EQ. Notice how the attack is less sharp. This matches the character of the Band of Brothers howitzers I mentioned earlier.

Here’s a selection of many of the shots, intended to recreate the atmosphere of an artillery bombardment.

And, finally, here is a battlefield montage track. For this sample, I cross-cut the processed Altiverb versions at three spots so you can get a sense of how the barrage sounds in difference spaces, such as at a firing range, in city streets, and inside a bunker. I positioned the shots in various breadths and depths of the stereo field to make it seem like you’re under a barrage of fire. There are also surround sound versions.

Tips for Leading A Sound Library to Completion

How can this help you? Here’s a couple tips:

Thanks to the 7th Regiment for their help, and to Frank Bry for his processing work. Also thanks to Charles Maynes, who PM’d me great suggestions in a Gearslutz thread years ago.

For those interested in the artillery sounds, I will be releasing the library on Airborne Sound soon. Sign up for the free Airborne Sound newsletter to learn more, and be notified when it’s available.