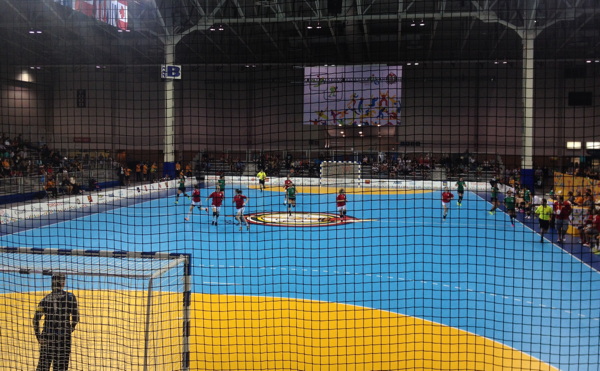 I’ve been field recording more this summer than I have in years. Part of the reason is that I’ve been enjoying experimenting with the Sony PCM–100 portable recorder, as well as comparing it with its older brother, the D50.

Another reason is that I’ve been able to access interesting events. I recorded the Formula 1 race in Montréal and the Honda Indy race in June. (I’ll have a post about those field recordings soon.) By a nice stroke of fate, I also had an opportunity to access the Pan American Games.

So, this post will describe my experiences, and share a some field recordings captured at the Pan Am Games you can download for yourself. In the next article I’ll include tips, tricks, and lessons you can use to prepare for field recording your own sporting events. 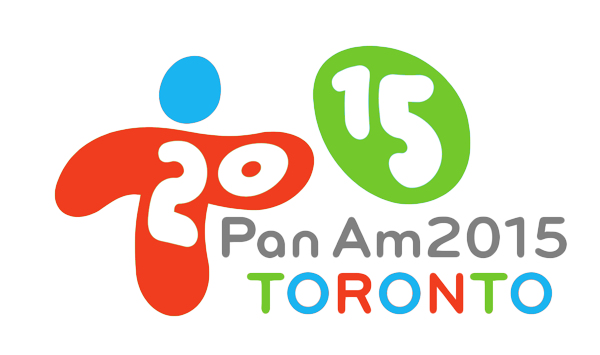 The Pan Am Games are essentially a focused form of the Olympics: only athletes from the Americas are allowed to compete. The events balance conventional sports (running, swimming) with unconventional ones (rugby, bowling).

That was the first thing that drew me. Other than auto racing, I have few sport sound effects in my library. The Pan Am Games hosted dozens of events. It seemed like a great opportunity to add sport field recordings to my library. I was also curious about the unconventional sports. After all, how often would one have the opportunity to record world-class BMX competition, or kayak sprint?

Also, the 2015 Pan Am Games were held in Toronto, my home town. In fact, I live downtown, and many events were only a few blocks away. I couldn’t with good conscience skip a quadrennial world-class event that was closer than the local Starbucks. Tickets were available, and were cheap, too. 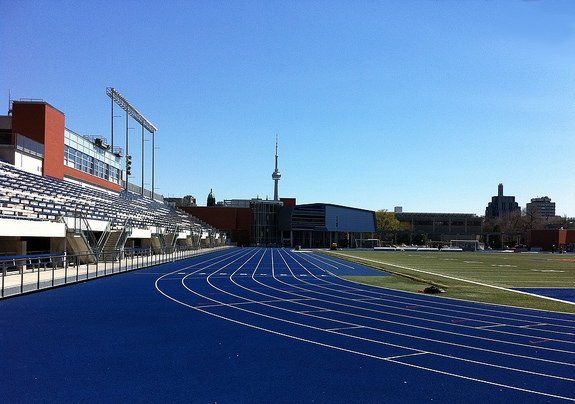 The events were held at a variety of venues across Toronto and the surrounding region. They ranged from isolated fields, open-air stadiums, typical arenas, and convention halls.

It can be quite draining dragging around a full kit of field recording gear during the height of summer heat. That means less energy to adapt quickly to interesting events, or to respond to problems. So, I chose events and venues that were close, and that I had visited before. They included:

There were four primary challenges recording the Pan Am Games. These are fairly common with all sporting events.

My general approach was to focus on coverage and articulation:

That required a lot of footwork.

Luckily, security wasn’t an issue. The Pan Am Games were staffed by 23,000 mostly student volunteers. While pleasantly helpful and endlessly cheerful, they weren’t at all attentive. So, fears about being hauled out of an event by security for field recording were completely overblown. They just didn’t care. That meant I was free to move around and record. I maintained a low profile, just the same.

This was helpful for another reason: it granted complete freedom of movement throughout the events. I could wander to sit near an excitable fan section. I moved from upfield to downfield, behind the net, and to the side. Also, since I went early in the Games schedule, seats weren’t packed, and it was easier to wander unnoticed. 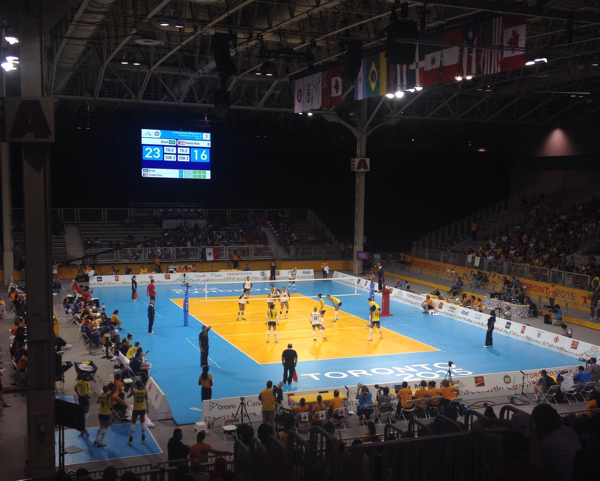 The environment was more challenging. The open-air events were located in downtown Toronto. That meant the tracks were threatened by city drone. Luckily, the event’s security buffer was large enough that traffic was pleasantly distant and didn’t invade recordings. However, the only way to avoid ambient sirens and news helicopters was to end the recording, or chop out those intrusions when mastering.

The interior locations had their own challenges. The most considerable was music. As most sports fans know, events will play a short 5–10 second sting of music after each goal or exciting play. This meant the most dramatic cheers were drowned out by music, and were unusable. I found one way to get around this was to record not the exciting plays, but the anti-climatic ones. So, reactions from saves and fouls were clean, without music. Once I adapted to that, I had far more success. 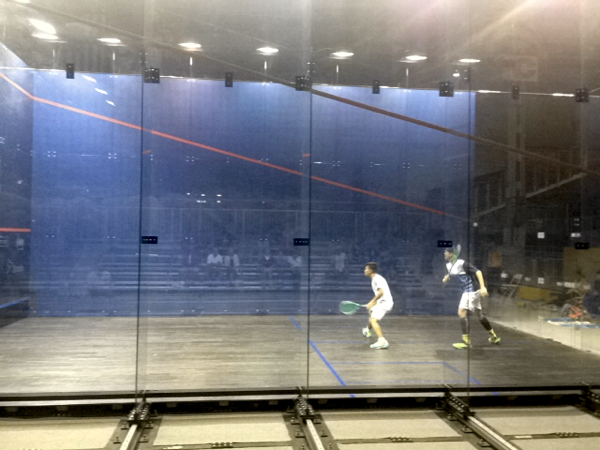 I wish I had researched the sports before I attended. Of course, most people know the rules of typical sports. I was focusing on more “unusual” events. I had a vague understanding of each of them. However, that wasn’t enough. Why?

One reason was timing. Knowing the typical game duration, or length of each period and the rest time between them, would have helped me schedule the time spent in each of my recording locations. After all, my target coverage required a large amount of takes:

That’s longer than most sports last, and that time doesn’t even include field recording focused cheers or chants. There literally wasn’t a minute to spare. So, knowing how much time you have to record is absolutely essential to be able to schedule your time in each place to ensure you cross all perspectives from your list.

I also didn’t know the scope of certain sports. For example, I now know that squash plays to ten points in best-of-five matches. Why is that important? Well, fans will know the arc of a sport. Their reactions will crest during important plays. If a field recordist doesn’t know that the next point will win a game, an opportunity for capturing a dramatic reaction may be lost. Luckily, I had my iPhone with me and researched each sport during downtime to solve these problems.

Archery was a complete wash. I knew I wouldn’t be able to get the sound of the bows or targets, but I hoped the crowd would provide cool reactions. Varsity Stadium just wasn’t set up for it. 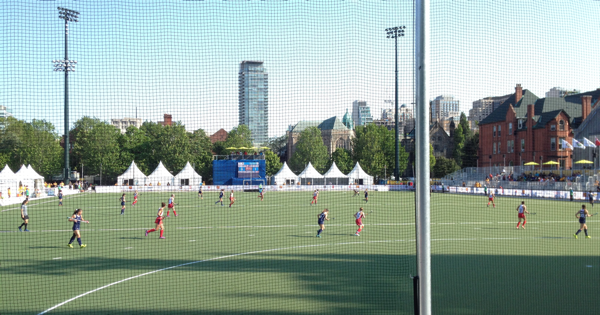 The other exterior location, field hockey, was far easier. I captured some great stick cracks resounding amongst the old stone buildings of the University of Toronto campus. Also, the women’s teams were quite feisty, and provided some frankly jarring player shouts.

The squash games were interesting. They were played in a “show court,” which was glass on five sides to allow fans to watch from every angle. That glass walls gave the ball impacts a harder sound.

Here’s a recording of the final play of a squash match. I like it because it has some great stumble-to-save plays from the athletes, sneaker squeaks, and characteristic ball smacks. I also thought the crowd was interesting. They sat quietly, but when a dramatic play happened, they provided good reactions. For example, during two swells, the crowd grows from an “ooo” (anticipation) to “ohh” (close call) then rises to applause. I left the announcer in this track to give you a sense of the flavour of the event.

I split out the final reaction, and carefully used editing and RX to remove the final ball smack to create a general crowd cheer. I did the same for most decent reactions I recorded.

I also recorded a women’s handball game. They were quite scrappy. I found a recording bubble off to one side. This example is a broad perspective that includes the players, the announcer, and crowd together to convey the entire game ambience.

Canada’s team was playing, so there was a lot of spirit, and I captured some Canadian-themed reactions and chants in later takes. One area had a lively bunch of fans. I noticed them early in the match, and made sure I captured some of their energy after I had completed the ambiences. I inconspicuously crept closer to them, and captured this “defence-defence” chant.

You’re welcome to download these sound effects via the SoundCloud player and use them however you like. I just ask that you do not share them, even free of charge.

The challenge is that every sporting event is in a new environment, brings different crowds, and follows a unique flow. Despite these vast differences, there are similarities when field recording sports, though. I’ll share them in the next article: 15 Tips for Field Recording Sporting Events. Join the free newsletter, subscribe to the RSS feed, or follow me on Twitter. I’ll let you know when the next article is available.