You are here: Home / Technique / How to Slate Sound FX in the Field with GPS, Photos, and Notes 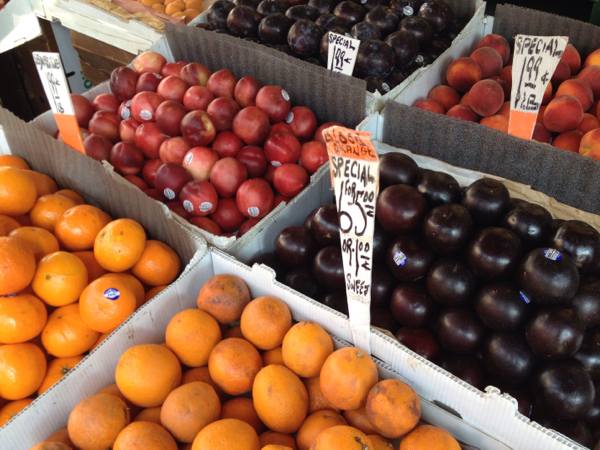 You’ve spent the day recording the sound of a lively farmer’s market. You return to the studio and open dozens of sound effects in Pro Tools. As you begin mastering the field recordings, confusion creeps over you. Was that 14th sound clip recorded at the market entrance? No, you remember, it was the one in a side alley, between food stalls. Wait, no, that was the one after it…

I’m guilty of this myself. So, today’s article will share one tool I’ve discovered that helps to solve this problem. It keeps track of your work, adds flavour and detail to your field recordings, and ensures you richly describe every field recording you capture.

Contents hide
The Challenge of Field Recording Record Keeping
Ways of Slating Sound Effects
Using Mobile Apps to Slate
How to Use MyPlaces! To Slate Sound FX
Set Up Before You Begin Field Recording
Wrap Up
Export Notes
The Benefits of App Slating
Read More

Why is it difficult to label tracks while in the field?

Well, it’s easy to become absorbed with tech specs, levels, performances, and listening to the environment when capturing sound. Often there’s so much going on that it’s easy to forget to describe sound effects as we record them. This can be a considerable issue, especially when capturing slightly differing locations, or when recording hordes of files at once.

Usually this is done by slating. I mentioned the importance of slating field recordings in an earlier article. That’s easy when you’re recording takes in a studio. It’s far more challenging when recording stealth ambiences under security’s watchful eye, or when scrambling to gather sounds under a deadline.

Ample detail makes sounds more useful. No matter how great a sound recording is, it is mostly useless until more information is added beyond the audio itself. After all, who wants to listen to hundreds of files from beginning to end, just to see if one of them is the track they need? So, both a descriptive sound file name and metadata help provide the critical info sound pros need to choose a file. Slating is vital to add this bonus info to the audio.

Typically, field recordings are labelled by verbally describing the sound effect that is about to be recorded. Read Why Slating Sound Effects is Vital – The Basics, and Beyond and A Sound Effects Slating Checklist for more info on how to verbally slate.

Verbal slating often takes a lot of time to do. Because of this, it can bog down the flow of a field recording session. It has the potential to drain inspired performances with a cumbersome list of technical details. It may take time as we rack our brains for a creative description. It’s awkward scampering around to each microphone to catalog it all. These are three main reasons verbal why slating is skipped entirely.

Some field recordists get around this by recording video. They roll a GoPro camera throughout the entire session. It records every performance. Later, these pros line up that the video with their clips in a Pro Tools session. That helps them identify each sound effect performance. In essence, they master field recordings to picture.

So, the ideal solution would be to slate fully, quickly, and silently in a way no one will notice. How is this possible? 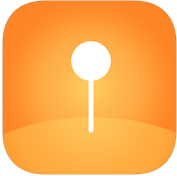 The solution is to use something most of us carry with us every day: a mobile phone. There are dozens of apps you can use to take notes while on the go.

It has many great features:

I had mentioned this little app on Twitter a while back. A few people asked how I used it. Unfortunately, MyPlaces! wasn’t designed to work strictly with field recording sound effects. That’s no problem, though. It just requires a slight bit of adaptation.

Here’s a step-by-step guide of my workflow:

That may seem like a lot to cram in amongst other field recording tasks. No need to worry. Once you’re familiar with the app, you can whip them off in 20 seconds or so. Here’s how.

How to Use MyPlaces! To Slate Sound FX

Set Up Before You Begin Field Recording

MyPlaces! requires a few brief steps before you get started. It may help to download the app and follow along.

Now you’re ready to being slating your field recordings. 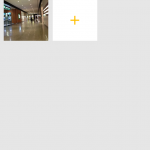 Press “Done” (upper right) to save the slate. That will return you to the Group screen. Repeat this process for each new slate you want to make.

After you’ve created a number of slates, you can press “List” and see a satisfying catalogue of notes. Press “Map” to see an even more impressive sound map of your field recording locations. 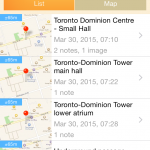 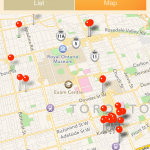 Of course, all these slates are trapped in your phone. How can you get this info into Pro Tools, or a metadata app?

The Benefits of App Slating

This article explained each step in detail. It may seem like a lot of steps. However, once you get used to it, you can fire off a slate in a few seconds.

App slating is simple, keeps detailed notes, tracks GPS, and pairs photos with slates. It is an incredibly easy way to slate field recordings when you have a few seconds to spare.

As a bonus, it’s already digitized, so the info can simply be transferred elsewhere without retyping work. It doesn’t require buying new gear, packing anything extra, and the solution fits in your pocket.