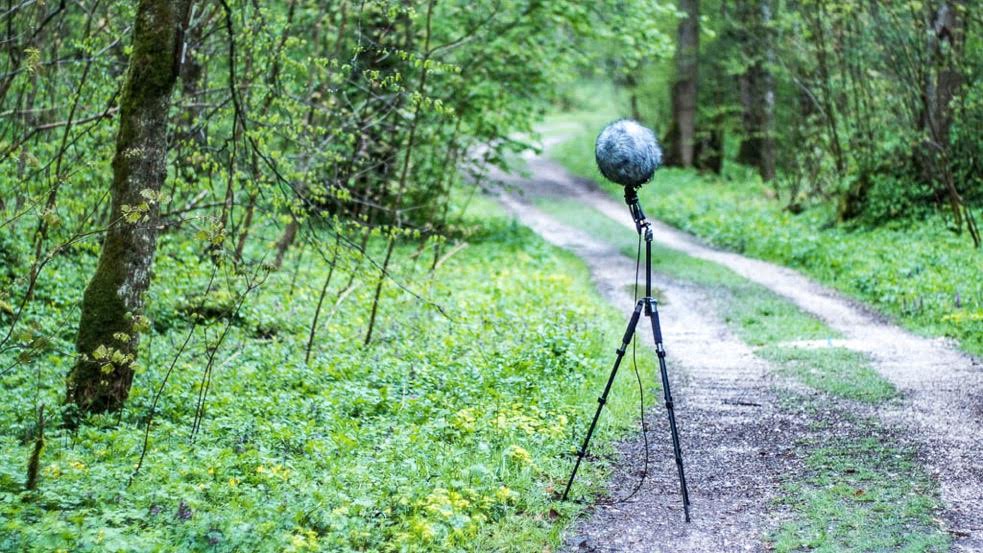 Last week’s article explored International Dawn Chorus Day (IDCD). That event, hosted by UK organization The Wildlife Trust for Birmingham and the Black Country, invited wildlife fans worldwide to appreciate the sound of nature as it emerges at daybreak.

FieldRecording.de website owner Sebastian-Thies Hinrichsen spearheaded a recording project to create an album of dawn chorus field recordings made worldwide on International Dawn Chorus Day, May 5th, 2015. Last week he shared with us how the project began, and the history of his field recording news site.

As I downloaded the IDCD album, my eye spotted a familiar name: community field recordist Andreas Usenbenz. I noticed that Usenbenz contributed not only field recordings to the project, but also mastered every submission as well.

So, earlier this month I reached out to Usenbenz. I wondered if he could share his thoughts about the project with me. He kindly agreed, and described fascinating details about recording and mastering quiet nature sounds in a special Q&A.

Unfortunately, I missed being a part of IDCD 2015. However, community field recordist and sound designer Andreas Usenbenz participated. You may be familiar with Usenbenz’s field recordings of ambience, machinery, glass, and cloth on his The Soundcatcher Web shop.

I asked Andreas Usenbenz about his experiencing capturing the dawn chorus. He graciously answered a few questions about the IDCD/fieldrecording.de album project.

Usenbenz recorded an impressive and cool dawn chorus track that is the introduction to the FieldRecording.de album: it is a full 25-minute field recording that features evolving birdsong with a special bonus: soft rainfall that fades in and out of the clip. It is quite evocative. You can download the track we’re referring to below on FieldRecording.de’s Bandcamp site, free of charge.

Q. How did you become involved with the IDCD fieldrecording.de recording project?

I’m a member of the field recording group on Facebook. Group owner Sebastian-Thies Hinrichsen (he also runs the website www.fieldrecording.de) was a little frustrated that no one in Germany notices Dawn Chorus Day. I told him that we can create something nice, like a record or something.

He totally agreed with me and a few other recordists from Germany, and he released a call for proposals for the International Dawn Chorus Day 2015 record.

Q. Can you tell me a bit about the field recordings of rainfall and birds that you captured for the project? How did you find such a quiet space with no traffic or people?

This is quite difficult as all of our nature is contaminated with noise pollution bred by modern mankind. I quite often grab my rig and head out to capture silence. And as often I grab my rig, just as often I come home totally frustrated about unsuccessfulness and noise-polluted recordings.

I’m living in a relatively quiet region of Southern Germany called “Swabian Jura.” It has a lot of valleys and hills. I often decide to record in the valleys, as they absorb the noise from the outside a lot. For the dedicated recording, I visited a really calm place at the start of the dawn chorus. It was about 4:30 am, and even at this time I heard a few trucks and airplanes going by. I edited them out. But if the raindrops from the trees would not have been there, I think there would be much more noise, also from the recorder. So, finding such places is all about Google Earth and trial and error 😉

For this particular recording, I got up at 3:30 am and drove my car about half an hour. To reach the dedicated spot, I walked around 15 minutes inside a super dark “I can’t see my hands in front of my eyes” forest. It rained a lot the day before, and it rained a lot later in that day, so I had a huge amount of luck to capture the rain-free time!

How to Recording Quiet Field Recordings

Q. Often nature field recordings can be quiet, requiring field recordists to increase gain that introduces noise or hiss to recordings. Your recordings are exceptionally clear and clean. How did you get around this? What equipment did you use for the recordings?

For this particular session, I brought my Sennheiser MKH 8040 in an ORTF configuration inside Rycote’s ORTF Windshield Kit, and fed them into the Sound Devices 702T. I really love my setup and it cost me a lot to get there. This mics are so exceptional clear and I can hear every sound coming straight from its place. Locating single sound sources is so good that I often like it more to listen to the mics instead of the “real world” 🙂

But even with this high-end setup I get noise when I crank up the gain too much. So, for this kind of recording I tend to record low, I mean really low… around 30–40 dB, and in post I add the gain again. For me, that gives a much cleaner audio than cranking up the gain on the recorder up to 100%. But it depends on the setup. I recorded the forest in 24-bit/96 kHz. The 96 kHz are not really necessary but the 24-bit are. It gives a much better noise floor and much better resolution than 16-bit, and cranking up the volume around 20 or 30 dB is absolutely no problem because of the high dynamic resolution of 24-bit recordings. But I got into some noise issues in winter when I recorded a super-silent snowfield with a few crows. When I try to get this to a "record level,“ it gets really noisy. And this is where the thoughts about the use of a recording should come in. Do I need it loud, or is it better to capture it at a real gain setting like I would listen to with my ears?

In the past I tried to set a proper recording level for my setup in the studio. I listened to music over my studio speakers in a very comfortable and moderate way, with a gain setting that feels super comfortable for me. Later I set up the mics in the same position and set the gain level to that same “feel.” I marked this level down on the volume knob. When I’m out in the field, I take this setting and try to set the gain so that it feels “real” for me with that specific headphone level gain setting. This is when I get the most natural-sounding recordings. 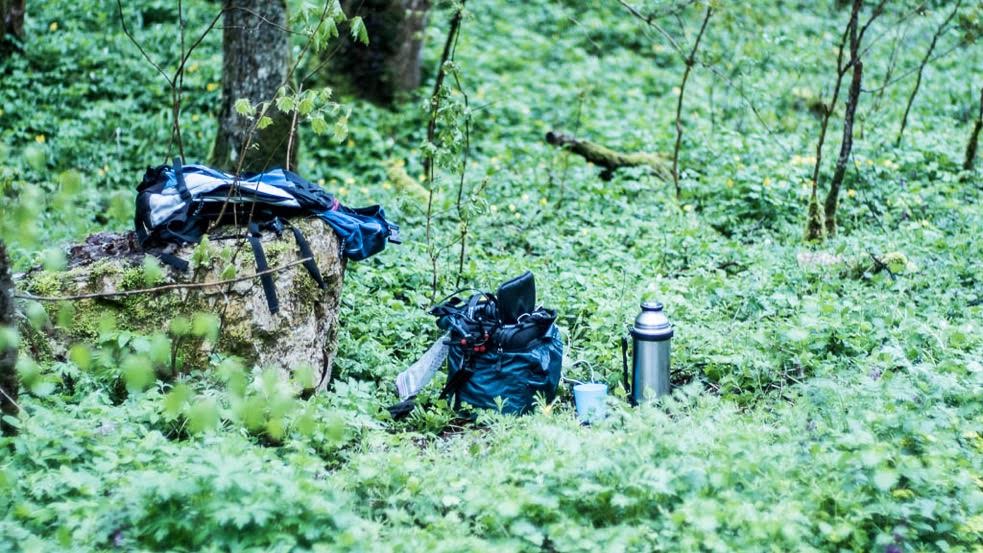 Q. What was it like mastering the recordings for the album?

I have to say that this was the first time I mastered a field recording record. There were a few questions that we have to get through before the final mastering process.

As I told in the last question, I tend to record in a real environmental situation where I listen/record the source at its real gain/volume constellation. But, when it comes to mastering for a record, you have to ask about the final volume. I listened to different field recording records out there and I noticed that they are sometimes mastered really loud and sometimes not. We decided to master to a max of –12 dB and I think this was a good choice between realism and usability.

What I didn’t like often where the recordings we got from the community. I found them often very lifeless, noise-polluted, unprofessional, and loveless, and most of them were ad hoc early morning open-window recordings where I could listen to the family having breakfast or movement by the recordist himself. I also noticed wind rumbling in every third recording. This was really sad, because that showed to me that most of the people seem to don’t know about their work and it seems that they don’t really listen. Just [using] a recorder doesn’t mean you’re a field recordist. On one hand, it seems very easy, but it takes so much effort to find good places, a good source, and you always have to think about the equipment. I know, people say that it’s not important what setup you use, just go out and hit record and make experiences. But this is only the half truth.

How to Begin Nature Field Recording

First of all, I can’t understand the question: "What recorder should I buy to get superior quality with super less money?“ Let me tell you something. This recorder doesn’t exist. There are handheld recorders that do a good job. But, if you want the good stuff, you have to bleed for it. That’s all. I recommend to buy a small portable recorder like the Sony PCMM10 and a cheap use Sound Devices MixPre (I still use the discontinued one and got it for around €300 from eBay).

Go for Octava mics or maybe an NT4 and save all the rest of the money for the real kit! it doesn’t make sense to buy a handheld recorder with internal preamps because they’ll never be so good like the one from the Sound Devices or similar brands. And in this case you have a kit with two functions: a real small pocket recorder and a really professional-sounding small two-channel rig for everything else. I recorded choirs with this setup and they sound awesome!

All other recommendations I can make are to go out and record. Be calm, don’t move, and try the very best to get exceptional recordings by finding good sources, calm places, or extraordinary places.

Many thanks to Andreas Usenbenz for sharing his thoughts and experiences!