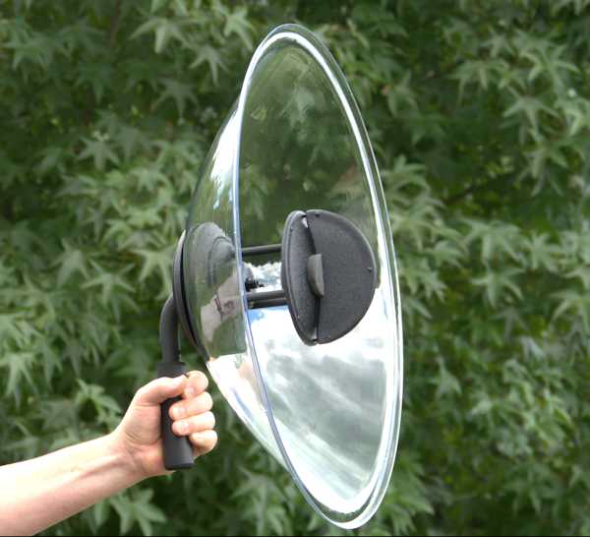 I’ve had a fascination with parabolic dishes ever since I read community field recordist Tim Prebble’s experiences using a Telinga dish to capture nature recordings. Prebble’s article showcases the stunning results parabolic field recordings achieve. Recordist Daan Hendriks, who is currently roaming the wilds of Africa capturing sound effects, is also a fan of the dish, and his clips are equally impressive.

I have a glaring lack of birds and insects in my sound library, so I’ve been chewing over the idea of buying my own parabolic dish. What options do field recordists have for using parabolic reflector dishes?

Unfortunately, field recordists suffer from a lack of choice. What’s out there?

Of course, those aren’t well-suited to field recording.

To my knowledge, other than the Telinga options ($750 for the kit, microphone not included), the only other sub-$1000 parabolic reflectors were the consumer-grade vintage Sony dishes, the PBR–330 and PBR–400, which occasionally pop up on eBay for around $100.

So, I was quite excited to see another current manufacturer of parabolic dish reflectors: Wildtronics. I found the company while poking around German field recording news site fieldrecording.de, and discovered an excellent review of the American manufacturer’s parabolic microphone dishes.

Fieldrecording.de is an online news magazine that features gear reviews, interviews, and info about capturing sound effects. The site is entirely in German, however Google provides a decent translation of the review. The article explores two types of Wildtronics dishes: the “Pro Amplified Mono-Stereo” model, and an “All Purpose” version. The site compares details from packaging to sound samples with various microphones. Check out the translated article: Review: Wildtronics Parabolic Microphones.

After reading the article, I explored the Wildtronics website. The product line offers a lot of options, and breaks down like so:

All variants can upgrade to a “feather light” dish, which bends. The “All Purpose” version can upgrade from the black dish to the standard transparent, and also the feather-light dish. Other upgrades are available: all the pro versions can add built-in low-noise amplification for a little extra cash.

Another cool feature: the pro versions come with a “booster disc,” which offers the equivalent sonic response of a 30″ dish from the supplied 22″ version. 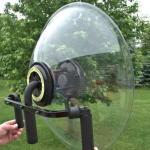 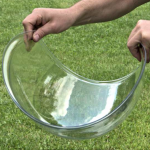 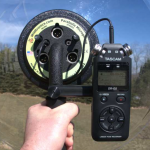 One particularly interesting feature is the “Pro Mono-Stereo” variant. That dish includes both a mono and a stereo microphone to provide three channels of recordings. Why would you want to capture three channels from a parabolic reflector?

Well, the mono acts as the focused “beam” that captures isolated bird or cricket sounds. The stereo channels are a bonus: they are separated left and right in Jecklin Disk-like fashion to provide an ambience of the entire soundscape. All three tracks can be mixed via a dial at the back of the dish. The result? The best of both worlds: an isolated, focused mono parabolic recording perched on top of a full, stereo ambience. Of course, you can choose to record just the mono track if you wish.

I reached out to Wildtronics owner Bruce Rutkoski for more information about their dishes. I asked him about the difference between the All Purpose and Pro Universal. Rutkoski kindly shared details:

The All Purpose model is more of an economy, yet durable, model that allows mounting your own microphones facing the dish or facing outward, allows mounting our amplified mic modules (not yet available), can accept any of our parabolic dishes (Black Ops, Standard and Feather Light clear polycarbonate), and can use our Micro Mic PIP microphone. The All Purpose is a little more complicated because it can be used a lot of different ways.

The Pro Universal model incorporates our booster plate, which increases low frequency response, gain, and subject isolation. The Pro Universal allows mounting your own microphone (preferably omnidirectional) pointed toward the dish, which is the normal way to use parabolic reflectors for best response. The Pro model allows the attachment of our two accessory bars to the handle. The Pro Universal also comes with a shorty cable that allows you to connect your microphone cable to the back panel XLR for convenience.

He also noted interesting details about the sound specs of the Pro dishes and their microphones. These were mentioned in the fieldrecording.de article, but I will quote Rutkoski’s correspondence here:

The mono microphone is the actual parabolic microphone and is low noise, 10 dBA. The stereo pair microphones are out of the focal point of the parabola for most frequencies, and offer a 180 degree stereo response. The Amplified models offer built-in, very low noise preamps (now –129 dB EIN) that provide direct headphone or line/mic outputs on the 3.5 mm outputs… The Amplified models are great for use with small, inexpensive recorders that can attach, with a Mini Accessory Bar, for a light, portable recording setup.

Many thanks to Bruce Rutkoski for his help sharing details about the dishes.

Find more info about the Wildtronics dishes, as well as a dish and microphone comparision and sound samples on fieldrecording.de.