You are here: Home / Curation / An Introduction to Sound FX Metadata Apps 1 – How They Work 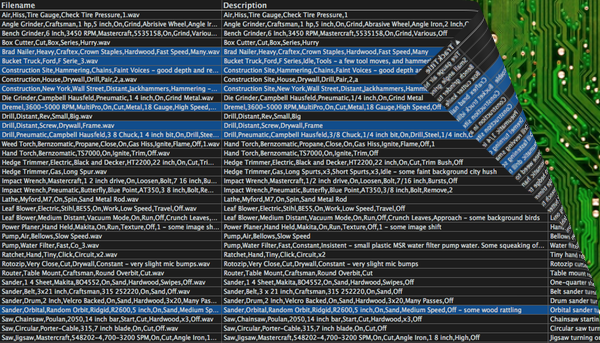 Have you collected thousands of field recordings? Perhaps you’re using a sound clip library at work. Maybe it’s an expanding collection of published libraries and indie recordist tracks. That’s hard to manage when you’re scrambling to get your work out before the next milestone deadline. Maybe you just want to step back into the wilderness and record new tracks. How do you stop wrestling with your jumbled sound collection and get back to work?

Sound fx metadata tames these sound libraries. We looked at the basics of sound clip metadata, and plunged into the details beneath the surface. Earlier this week, we saw which metadata fields suit basic, advanced, and pro sound libraries. That’s great, but how do you add this metadata to sound effects, and organize your sound library?

Dozens of apps have been created to solve this problem. This post will explore them. It will:

Next week we’ll get into specifics. I’ll look at popular apps, explain their highlights, and share a chart comparing their features.

It’s interesting to see how this happens. At first, CD libraries didn’t have this problem. Their plastic cases are vestigial now, but at the time, they actually made it easy to store and sort sound libraries. As sound collections digitized, they lost shape, and began to sprawl.

I saw this during my time as a sound librarian. At times I’ve had to hunt and peck through SQL server databases to tweak sound clip listings. I’ve used unholy combinations of Excel spreadsheets, FileMaker databases, custom scripts, and hacks to grapple with hundreds of thousands of clips. Thankfully, that’s no longer the case. It didn’t take long for specialized software to be written to help sort and use large sound libraries.

Understandably, that’s a large task. So, before we get to the details about each app, let’s learn about what this specialized software does, and how it works.

What Are Metadata Apps?

A handful of independent publishers have written specialized software to wrangle exploding collections of sound files. This software allows you to search, browse, and audition clips in your library. It also embeds text data into the file. This data becomes attached to it, and is carried with it wherever the file travels. It doesn’t interfere or damage the audio at all. Dropping this file into the app magically displays a wealth of text: categories, tags, descriptions, and even images.

The term for this software varies. It’s sometimes called by the stiff corporate name asset management, or the more friendly sound effects database. Instead, I prefer the term sound browsing app or metadata app. That’s clear, and simple. And, while not ever app adds metadata or browses sounds, I’ll use those terms interchangeably to refer to software that manages sound libraries.

What do Metadata Apps Do?

In the first article in this series, I mentioned that metadata is deliberately flexible. Apps offer a host of features to compensate for this. However, in the end, metadata apps have only four basic jobs to do:

Let’s look at each.

As you can see, metadata apps do a lot of heavy lifting. They have huge tasks to complete to ensure sound pros and librarians can manage large sound effects collections.

So, which apps get the job done well? How can you choose between them?

In the next article in the series, I’ll describe the most popular sound browsing and metadata apps to help you decide what’s best for you.