You are here: Home / Technique / An Introduction To Field Recording for Feature Films 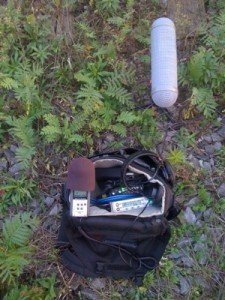 I recently wrapped up field recording for an exciting feature film project. I began writing about that when a thought struck me: the craft of field recording is radically different, depending on the project.

Now, that may seem obvious. But the difference between regular field recording and capturing sound clips for films is so drastic that it seems like a separate craft entirely.

I wrote about the difference between field recording styles before. My book, Field Recording: From Research to Wrap talks about capturing sound for a specific audience. This is something else.

So, today’s post is a brief introduction to field recording for feature films. I’ll explain what’s different, and share ideas for approaching your own shoots.

A Variety of Experiences

So, wait. Is there actually a paint-by-number template for recording for feature films?

Well, field recording isn’t a mechanical craft. It’s not predictable. Consistency is prized in manufacturing. Conformity and repetition work against you when field recording. So, there’s not really a cast-iron standard for field recording for feature films.

Also, field recordists often work alone. Cross-pollination of the craft isn’t common. That means there are few opportunities for standardization. It’s hard to discover if you work the same as the next guy. That makes sense. Each field recordist will have their own style. Game audio crew, and even TV recordists may record differently. Other than using microphones and capturing sound, every project will differ.

That’s the beauty of field recording. Every shoot is unique. Your own experience may vary.

However, I’ve noticed similarities field recording for the films I’ve been fortunate to contribute to. They are:

Each fresh field recording mission is like the first day at a new job. Of course, you’ll know your gear, and how to use it. Everything else will be new.

Some field recordists specialize in specific subjects: guns, cars, or wildlife. They’ll have an easier time with each fresh shoot, since they are already familiar with their subjects. Of course, details and environments vary. Familiarity makes things smoother, though.

Constant variety is trickier. Each new subject has its own sonic character which you’ll need to research, learn, and manipulate. So, like the first day of school, you’re thrown into a situation with a lot of unknowns.

Incidentally, the key to creating exceptional sound effects for the post sound crew is to reduce these unknowns as much as you can.

Conventional field recording is liberating. The planet murmurs with thousands of sounds. We can strike out and record whichever subject we choose, however we wish. It’s a process of personal exploration through sound.

Field recording for feature films is vastly different. It’s not about you. If you are recording clips the way you prefer, your work will fail. Every take must be performed with the post crew in mind. Often you won’t know these people, their style, or their preferences. Just the same, every take must be recorded for these people.

I visualize an editor in an edit suite every time I press the record button. I imagine them sitting in a mix theatre with the mixers, director, and producers. Why? Their careers are on the line. They have to defend their work in the theatre. I record thinking of them with every take.

It’s true the clips may be only a small part of their editorial compositions. However, it is vital to think about how your takes can help them succeed, even in a small way.

Field recording can be indulgent when we do it for ourselves. There’s nothing wrong with that. The difference when recording for feature films is that your efforts become the foundation for other people’s work. It’s easy to get caught up in the thrill of recording a race car or an automatic shotgun for a Hollywood film. It pays to temper this feeling and remember, that as a field recordist, you are performing a service to help others succeed, not yourself.

For example, Batman Begin’s sound supervisor David Evans asked me to record the Vancouver SkyTrain. Only after the film was released did I learn that it was intended to double for the climactic monorail battle scene between Batman and Ra’s a Ghul.

This meant that there were two challenges:

Why are these things important? Seeing images helps match the sound effects to the visuals. Knowing the type of subjects, brands or makes or models, perspectives, and distances help find and capture appropriate recordings. For example, I didn’t know what speed they needed for the monorail, or the distance it was from the camera. Knowing this adds precision, which makes sound effects stronger, and more useful. Not knowing this expands the amount of coverage you must collect.

Seen from another slant, it’s actually quite liberating. It means that your role as a field recordist isn’t merely technical. It’s a generous benefit. It allows room for interpretation. In these situations, you have more latitude to record with creativity. As long as you don’t wander into conceptional, abstract takes, creative field recording may help supply characteristic takes to the edit.

Interpretation shouldn’t replace the precise takes that the sound crew require, though. They should always have the tools they need. However, if you have leeway, you can inject your own signature into the recordings.

Field recording for feature films often requires working with many unknowns. In most cases, this means that you must work with risky assumptions. Mitigate that by providing extensive coverage.

Field recording for films is largely a hands-off experience. Why?

Some recordists in other films or in game audio have a full crew and a major company behind them. I’ve had that experience a few times, but more commonly you’ll be on your own.

That means you must work independently. You’ll need to motivate yourself. No one else will do that for you. The sound supervisor won’t call to check in, or provide guidance. Instead, it’s your responsibility to get the job done on your own.

What this means is that you must independently:

A sound supervisor or fx editor is far too busy to handle these things. They may not have any experience with them, anyway. Either way, to get the job done, you must inspire and motivate yourself, and complete field recording independently.

Some feature film field recording projects have massive budgets and meticulous schedules. In my experience, that’s not typical.

Post-production, as many of you know, can be a hectic process. Often there’s not much time. An editor’s work may need to be revised or reconformed to fit picture changes. Editors don’t have time wait around. You’ll need to hustle to provide the sound effects to the crew as quickly as you can.

Feature films have hundreds of moving parts. By the time a picture arrives at post, budgets may be tight. And even when that’s not the case, requisitioning extra cash for a field recordist isn’t a simple request. The result is that money doesn’t flow freely, even for major feature films. It’s not that you’re not appreciated. It’s just that field recording is not usually involved in projects. Organizing a field recording shoot and diverting funds can be a hassle. It can be complicated, or political. The point is not to get hung up on a big payday before you punch in. Money is scarce. Focus instead on helping your editor friends succeed.

Post sound crew are busy hurrying to get their tracks to the theatre. Handing them raw recordings will make their lives harder.

Instead, master your sound effects before providing them. Discover how they prefer tracks delivered. Learn what metadata they use, and if they have a naming style, or category standards. Deliver your tracks to match your client’s needs.

After reading all that, you may wonder, How do I learn to do all this? How do I know how to record the correct sound effects if I haven’t seen picture, or I’m not given hard specs?

It’s a good question. I’ve mentioned earlier that field recording is learned tangentially. It isn’t taught extensively in schools. It usually grows out of other trades, such as production sound, or sound fx editing.

I wouldn’t be able to record sound effects for film or TV if I didn’t have experience cutting them first. That taught me which sound clips work, and which struggle. It’s important to note that what clips succeed in film won’t necessarily work for theatre, product design, or game audio.

This also nails down the importance of recording for an audience. I wrote earlier that recording for a specific audience supercharges your sound fx, and what you have to do when you don’t know who that is. Both come into play when recording for features.

Don’t have this experience yet, but want to begin field recording? Practice editing. Try editing a five minute section of a feature film, game, or TV episode. Learn which clips are merely sufficient, and which soar. That will inform how to tailor your recordings in the field.

Often when field recording for ourselves our goals are free. We record to test, explore, and document the sound around us.

Recording for feature films (or any specific project, actually) requires finding new goals. What goals are these?

Whether you are recording for a feature film, a triple-A game title, or a school play, it’s important to realize that you must record sound FX differently. Recording for a project requires a shift of focus. You must defer your preferences to other creators.

When you ensure that your field recordings meet the needs of others, and deliver them the way they expect, your work expands. It grows from simple clips recorded in the field to play a part in a story on the screen.