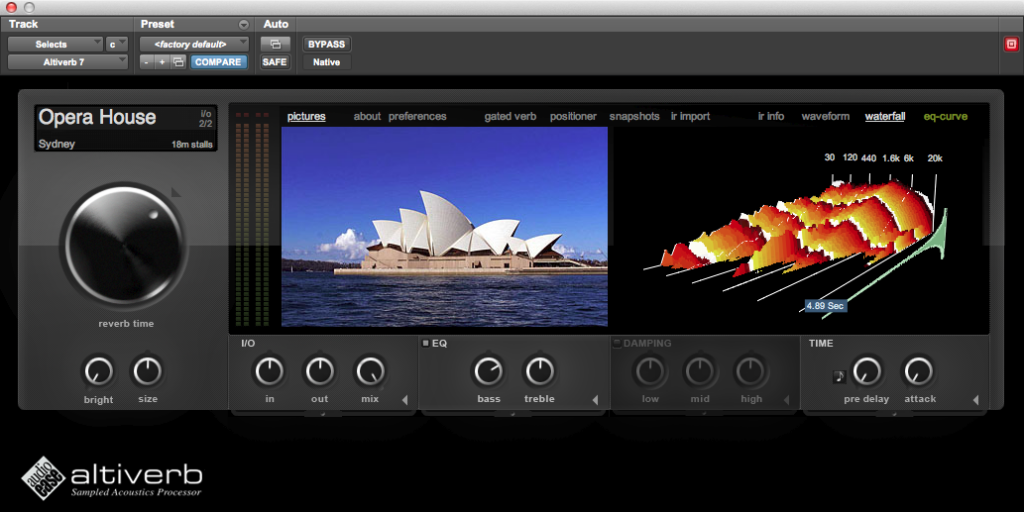 The are many talented sound designers among us. Using software, creativity, and inspiration, they warp door slams into space cannons. They twist pig squeals into alien queens.

I’ve always admired these designers. Part of the reason is because sound design and samplers are foreign to me. I record natural sound effects: atmospheres, engines, nature, that sort of thing. I don’t dabble too much in sound design. Because of that, I don’t have much call to use creative software plug-ins.

Recently though, I was mastering field recordings that demanded a particular stylized effect: reverb.

So, today I’ll share my experience choosing a reverb plug-in for field recordings. Buckle up (this is another long one), and join me for a first look one of the most popular reverb plug-ins on the market: Audio Ease’s Altiverb 7.

An Introduction to Reverb Types

the persistence of sound in a particular space after the original sound is produced.

Digital plug-ins recreate this effect in one of two ways: by algorithmic or convolution processing. What’s the difference?

What Are Impulse Responses? 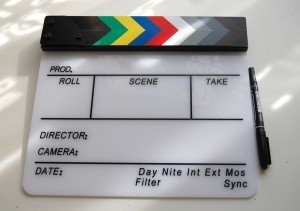 An impulse response (IR) is an audio snapshot of the reverberation created in a particular space. A warehouse is a good example. This impulse response is created by recording a brief, loud sound in the warehouse (a starter pistol, clapperboard, or balloon pop). Some people use a sine wave sweeping across the entire spectrum.

Whichever the choice, this recording captures how sound performs in that space. That snapshot becomes a template that is loaded into software. The software then convolves, or multiplies each sample of your original guitar chord with the samples in the impulse response and, voilà!, your death metal chord now seems as if it was played in the warehouse, too.

So that’s the science. What’s the difference for sound effect pros?

Some people have an issue with convolution reverb. They claim it’s lifeless and boring. Some say that the tails are “dead on arrival.” I’m guessing that’s because the critics’s projects require reverb in ways that don’t match convolution’s merits.

I, however, had another plan in mind when I purchased Altiverb: tweaking field recording clips.

I’ve written in the past that I prefer not to apply processing when mastering sound effects. Why? My goal when capturing field recordings is to “recreate reality.” I aim to capture clean, evocative clips of machines, atmospheres, or cultures. Don’t mistake me. I love creative performances of bulldozers or market stall swindlers. However, for the clips I capture, creativity defers to accuracy during the mastering stage.

For this reason, I was unimpressed with reverb plug-ins I had tried. They seemed tinny and metallic. They were brittle and unnatural. I found it difficult to create convincing results. And it’s no surprise, either. I was using the wrong tool. While algorithmic reverb is useful for sound design, it didn’t fit with mastering realistic field recordings. Then what did I need it for?

Both of these mastering tricks require a special type of reverb: it must be transparent, subtle, and natural. Listeners should not be able to tell that reverb was applied at all. It must be invisible. In this case, the metallic, crisp aspect of algorithmic reverbs I tried corrupted the authenticity of the sound effect. These mastering tricks require a more delicate touch: the natural shape of convolution reverb.

After hearing the community’s thoughts and listening to samples online, I was convinced Altiverb 7 was the solution.

Luckily I found a deal for far less on eBay. If you go that route, you’ll need to register the serial number back at Audio Ease. They’ll then send a license to your iLok account, and provide (expiring) links for the 4 gig download. The entire experience was professional and slick.

I fired up Altiverb in Pro Tools 10. The interface takes up a lot of real estate. Let’s take a look (click to enlarge). 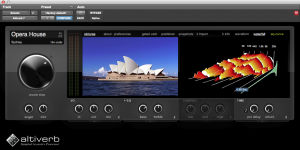 I found the interface a relief to use after the jarring wall of dials on other reverb plug-ins. 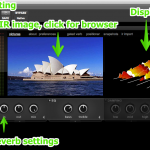 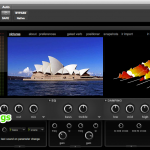 Those controls shape reverb with typical settings: duration, room size, mix, EQ, and more. But how do you choose your location, or impulse response? Clicking the location image invokes the impulse response library window. 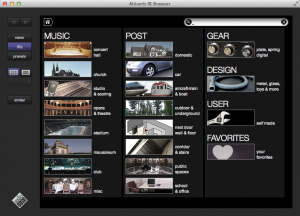 This window allows you to browse the (proprietary) impulse responses packaged with Altiverb. The browser window allows searching by keyword, usage type (music, post, etc), location, and size. Found an IR that’s not bad, but not quite right? Click “similar” on the sidebar to display its siblings.

Choosing an IR allows selection of alternative microphones at that location. Many locations are slight variants (say, the 20+ interior room IRs), and it’s easy to lose track of which IRs you like while you flip through them. No problem; simply click the heart icon to favourite the ones you prefer.

What IRs does Altiverb stock? The impulse responses are divided into these broad categories:

A while ago I hired a voice actor to recreate a United States homeland security address I heard in an airport there. For fun, I took that recording, and applied some basic Altiverb settings to it.

Let’s see what happens when we apply some dramatic changes, first. Here’s the dialogue placed in the Vienna Konzerthaus:

And here’s the track in Saint Etienne church, France:

Let’s see what the dialogue would sound like if performed in Wembley Stadium:

These changes were applied with a single click. I didn’t tweak the settings. Couldn’t you see these as just a boring preset? Well, keep in mind that the effect on the dialogue is precisely the same as if my voice actor had actually performed in those places.

Those were fairly dramatic. I think Altiverb shines in less ostentatious settings, like in this bathroom:

Or, perhaps this bedroom:

My favorite Altiverb effects are “Next Door” effects (FX crew may be more familiar with the term “offstage”). This technique places the clip in another room, or inside, as compared to the listener. The first example is the baseline, with the listener next to the dialogue, in a small room:

And here’s a perspective a floor above the speaker, with all household doors open:

And, finally, in the same room, but with all household doors closed:

Cycle through these last three to hear the effect of the different impulse responses.

And if that didn’t give you a decent impression, here’s another sample from Audio Ease themselves. Compare the dry and wet versions (listen to the dry version first).

What Else is Out There?

First, a caveat: there are dozens of reverb plug-ins. I’ll list what I tried, and describe others that consistently ranked highly across the Web.

Everyone has their favorite reverb. I may have missed yours. If you like, share yours in the comments below.

Lexicon reverbs are the cornerstone of many mixing theatres. They offer the PCM Native Reverb plug-in bundle ($599, iLok2, VST, AU, RTAS) which emulates the outboard box. Some pros have commented that, while good, it falls a bit short of the rack version. 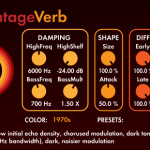 I tried out Valhalla DSP’s line of reverbs. Don’t let their interface put you off (they were apparently influenced by NASA usability standards). That’s actually part of their appeal. It’s incredibly easy to navigate the plug-in dials and presets. They offer VintageVerb, ÜberMod, Room, Shimmer, and FreqEcho. All are an affordable $50, and FreqEcho is free. They’re offered in VST, AU, and RTAS formats (AAX is in the works). I enjoyed using these reverbs. 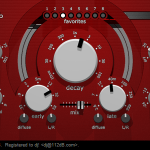 112dB’s Redline Reverb ($149, VST, AU, RTAS) takes an interesting approach. The plug-in is based on a single algorithm, unlike others which supply separate plate, spring, or other reverbs. Instead, users twist the initial algorithm to fit their needs. While chatter indicates it’s not the most realistic reverb, it has many vocal fans that rave about its musicality. 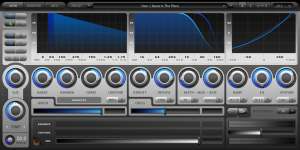 Wave’s Renaissance Reverb ($150) and TrueVerb ($150) are also well known in the community. 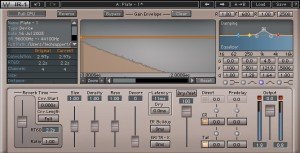 Another convolution plug-in that gets passed around is LiquidSonics’ Reverberate ($50, VST, AU, RTAS, AAX). Brace yourself for the jarring interface. Interestingly, Reverberate offers “true stereo” processing, which means each channel is processed separately, then summed into a single stereo output.

Voxengo’s Pristine Space ($119, VST) gets good press, too. They also offer additional impulse responses that you can download, free of charge.

So how did Altiverb rate?

I was incredibly impressed. Two things in particular appealed to me.

First, I found results were outstanding. The IRs convincingly placed field recordings in new environments. I also felt that the sound quality was superb. The reverb felt smooth, and natural. I couldn’t “hear the software,” so to speak.

To my ears, Altiverb’s power lies in the natural cast of its reverb, and how accurately it recreates other spaces. I did find that its affect on sound effects is not always as convincing as with dialogue, however that was usually because of the nature of the clip, and not sound effects in general.

Now, note that I’m using Altiverb for field recordings. If you’re mixing music or post your results will vary. It may not be the best choice for the sound designers in the crowd. However, it met my needs for subtlety and transparency.

Secondly, I appreciated its ease of use. The interface was intuitive. Despite packing in so many options, the layout felt clean. It allows pros to get results quickly without burying them under a wall of dials and faders.

I also appreciated using its VST plug-ins in Soundminer to batch-process entire families of sound clips quickly and effortlessly.

Is Altiverb 7 the best choice for you? Well, it’s pricey. However, Altiverb’s interface, usability, and reliability all match what you’d expect from a product at its price point. The free monthly IRs are a pleasant bonus.

In the end, it really depends on the work you do, and the type of reverb you require. Convolution reverb may not apply well to your projects. However, if you indeed require convolution reverb, you’ll find that Altiverb’s IRs are sweet, smooth, and subtle.

Thank you to everyone who Tweeted plug-in ideas, and those that suggested I write this post. Cheers!