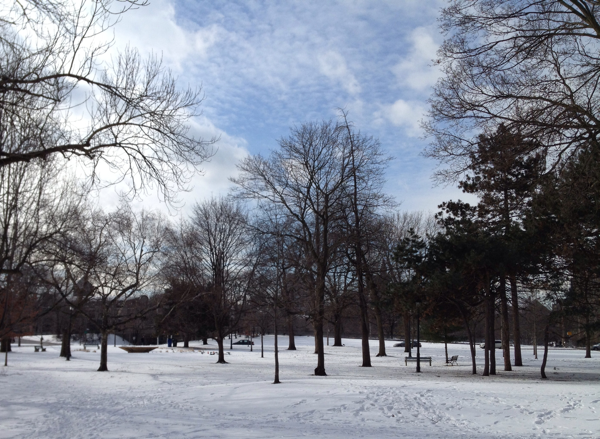 I’ve had a particular sound effect on my radar for three years: subway passes.

Now, you may think that subway sound effects aren’t rare. You’d be correct. However, there was a unique aspect about these sound effects that I was eager to capture. To get the job done well demanded one requirement: I had to record in winter.

Now, I’m the first to correct anyone who assumes Canada is a vast, snowy wasteland. Summers are hot, and oppressively humid (30˙C/86˙F or more). Winters are mild. Each year during winter, however, the shoot never seems to come about.

I could use Toronto’s current frigid cold snap as an excuse (–25˙C/–13˙F). I could cite how the temperature affects recording gear. I could write about the challenge of keeping quiet while shivering in the still, icy air.

But those are actually reasons why a field recordist should record in winter. In fact, it’s the best season to capture sound effects.

In this post, I’ll explain how seasons affect field recording, and how I tracked down those subway sound fx.

I’ve written before that I like the challenge of capturing high-performance engines: race cars, fighter jets, and trains. They have customized engines built by unusual manufacturers. That means there’s a good chance they’ll create interesting sound effects.

Transit vehicles are the same. Subway trains, trolleys, and busses are predictable. You’d think it’s easy to capture vehicles that run on a schedule. That’s usually true. It’s not as easy to capture full coverage of them, though. You may have hours of interior ride recordings. Capturing exterior or distant clips isn’t as easy.

This was the case with the Toronto subways. I had interior station takes. I had riding perspectives. I captured plenty of subway crowd, station ambiences, and platform takes. One eluded me: exterior perspectives.

To solve it, I turned to research.

Toronto’s subway trains are built by British aerospace company Hawker Siddeley. They had been suppling the “H-Series” cars since 1965. They’re old, rickety, and uncomfortable. In short, perfect for sound effects.

I examined the Toronto Transit Commission’s subway map. There are only a few places where the subway runs aboveground. Most of those were near heavy traffic. This map shows where, click the image to enlarge.

I finally found a good spot: a scraggly park that hugged a short span of the track. It was a reasonable distance from any significant traffic, and had few visitors. As a bonus, it met the track on a curve. That was good. It meant rail screeches, scrapes, and grinds would be amplified. 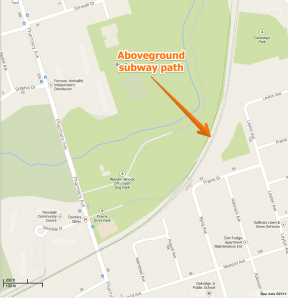 I originally hiked out to the location during a summer years ago. I set up my gear. The spot was perfect. The trains whipped by the bend a meter from the microphone. I noticed a surprising feature as well: the rails began to sing and shimmer long before the train arrived, creating a cool, warbling sound.

Excited, I ran a few takes. I quickly realized that it was pointless: the park was saturated with insects and birds.

I knew to record any decent takes I had to return when the insects were dead, and the birds were gone: in winter.

Recording in winter is not easy. Timothy Muirhead wrote an article about cold weather recording a while ago. He covered its effects on gear, how to stay warm, and other observations and suggestions.

Why else is it tricky recording in winter?

Seems tricky, doesn’t it? Don’t worry, there are some amazing benefits to recording in winter. I’ll get to those in a moment.

The 40 km/h winter winds ruled out portable recorders. Instead, I used a Neumann 191 in a Rycote and wind sock. That held up well to the gusts. 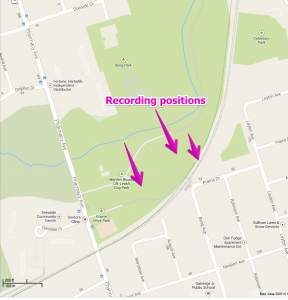 I wanted a variety of distances, at different parts of the track. The trains would make more squealing sounds on a tighter part of the curve. So, I captured turns as well as straight sections at close, medium distant, and distant perspectives. 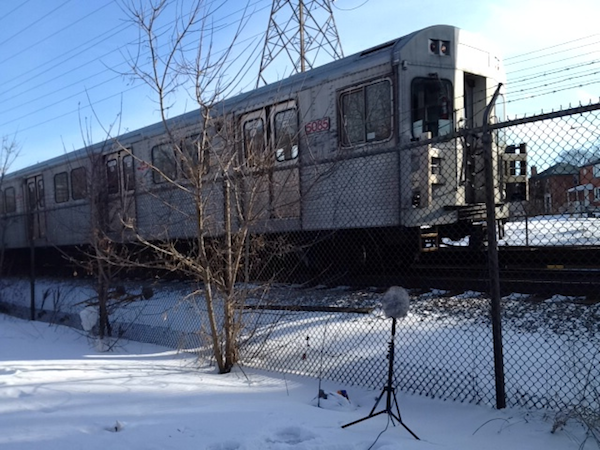 Here’s an example of a close, fast subway pass sound effect. You can hear the rails squeaking and singing a bit at the beginning before the train arrives.

I also ran a few takes at a distance, around thirty meters away. Luckily, there were some problems on the track, and the trains moved at variable speeds. Here’s a recording of a train passing, with a bit more distance.

And, for kicks, here’s an iPhone video, first with the phone’s microphone, then with the Neumann recording transposed.

Watch the subway video (switch to high-res for the best audio).

With all the hassles I mentioned before, why bother recording in winter? It’s definitely not pleasant.

There are some major advantages, though. Here are the obvious ones:

There are also some other cool features. One of the best sensations of winter is the still, peaceful winter night. Field recordings captured in winter seem exceptionally clear and crisp. Depending on the location, sound effects can convey a beautiful, natural reverb. Why is this?

Science. Winter and snowfall have an attractive effect on field recordings.

The end effect? You’ll avoid the common problems of animals, insects, and people. The insulating nature snow allows a pure hush to descend around you. And yet the cold air allows loud sounds to travel farther in the stillness, creating clean, natural reflections, even at great distances.

Bundle up, brace yourself, and give winter recording a shot. You will find that
capturing sound effects in winter improves your field recordings. They’ll hang in the sound booth-like silence, and land on your microphone in clear, crisp clips.