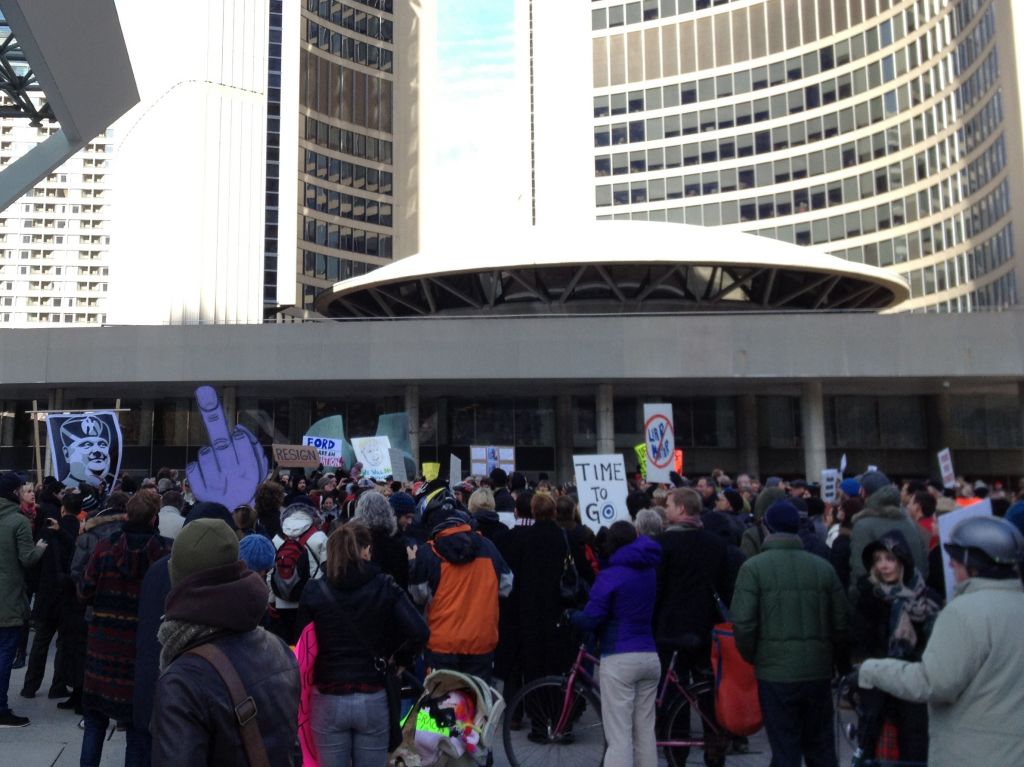 Toronto mayor Rob Ford has been accused of many things. Being boring isn’t one of them.

Bitter controversy has followed Ford ever since he was elected in 2010, more so than any Canadian politician in recent history. Crack cocaine smoking, excessive drinking, and a liberal interpretation of the truth has citizens foaming at the mouth. And I’m glad. Why?

Well, I’m not particularly a political person. However, wherever there is controversy, there are always good sound effects. Torontonians planned a protest in early November of last year. I wanted to capture the sound of their boiling fury. There was another reason, too. I wanted to record tracks for a community I had recently joined called The Sound Collector’s Club.

In the process I worked with two field recording tricks:

Contents hide
Recording For A Community
What is The Sound Collector’s Club?
The Shoot
Challenges
Technique
Results
Two Field Recording Tricks
1. Adaptation
How to Adapt to Unpredictable Sound Effects
2. Recording for Unknown Listeners
How to Record For an Unknown Audience
A Twist in the Craft

Recording For A Community

I’ve written often that field recordings improve when you focus on an audience. What do I mean by “audience?”

There are two ways of looking at it:

Both audience types have particular needs. The ideas is that knowing these needs informs your recording technique, gear selection, and other choices. That fortifies your work in comparison to recording using arbitrary gear, positioning, resolutions, and more.

Is this always the case, though? What if there’s no way of knowing your audience?

This was the concept I faced when recording for The Sound Collector’s Club.

What is The Sound Collector’s Club?

The Sound Collector’s Club allows members to upload field recordings in a specific, hand-picked number of categories. Once you share sound effects in one category, the rest of the group’s clips in that theme become available to you.

New categories are announced periodically, and group members are encouraged to strike out and record new clips. It’s a good way to keep you recording, and keep your craft fresh. At £20 a year, it’s also an inexpensive way to expand your sound library with fresh sound fx. The more categories you contribute to, the larger your library grows. And, in the process, you get to meet and sample the work of other pro recordists.

The Club was founded by Michael Maroussas. It was featured in an excellent Tonebenders podcast episode (begins at 36:24), and Timothy Muirhead has written about it on his blog. Learn more there, and at the Sound Collector’s Club website.

What’s particularly interesting for contributors is that it forces them to record sound effects without an audience. Why?

Well, The Sound Collector’s Club is a worldwide group of field recordists. Who knows what projects they will add your recordings to? There’s no way of knowing your audience. That means field recordists are forced to capture clips specifically for a broad, unknown group of people with diverse needs.

I like this idea. I was interested in testing my ideas about “audience” with one of the Club’s themes: “Protest!”

The protest was planned to take place in downtown Toronto, in front of city hall. I arrived early to get a feel for the location. Here’s a shot of the general area. The crowds were still arriving at that point. 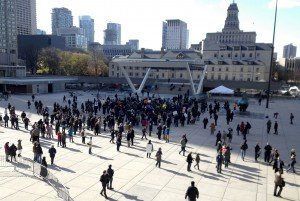 Although the day was clear and sunny, it was quite windy, and bitterly cold. Wind threatened blowouts. And, while the rally was at noon, I was dismayed to see that a small construction crew nearby wasn’t breaking for lunch. A tamper and a bobcat were redoing parts of the plaza. That contributed a low end rumble that I prayed would ease over time.

Speeches were scheduled to take place on the stage (upper centre). I ran a few takes, and was horrified to learn that the microphone was picking up heavy RF. The stage structure acted as a massive antenna, and laced the recordings with a local radio station.

So, while the plaza was huge, usable spots were limited. 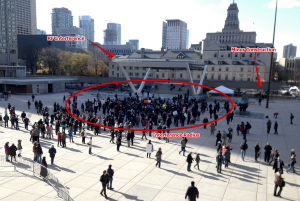 I brought a Sony D50 with me, but it was useless. It couldn’t handle the 50 km/h winds. Luckily, I was trying out a new custom stealth bag, and had a Neumann 191-i in a zeppelin and a wind sock tucked within it. That fared better. I did have to work with natural sound baffles (walls, etc.) and positioning at times to hide from the strong gusts.

A bit of trial and error revealed a large radius of RF from the structure. I discovered that the RF diminished a certain distance away from the stage.

In the end, I recorded takes at these locations: 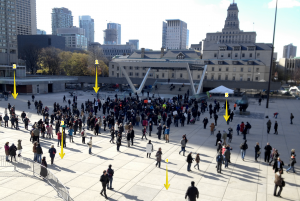 I crept behind the speakers on the stage to capture a perspective of the complete crowd facing my direction: 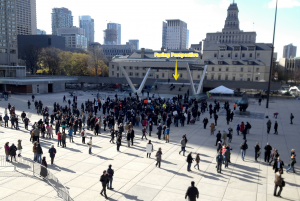 Here’s what it looked like from that perspective. You can see how the crowd is focused in my direction. 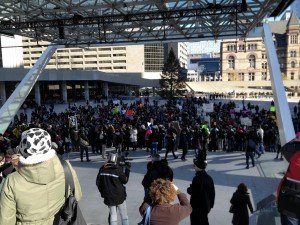 After the speeches, the crowd huddled at the front doors of city hall. The numbers had swelled considerably by that time. 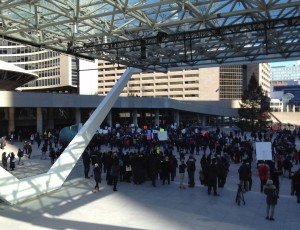 They were chanting furiously, and had a lot of energy. They were also partially under an overhang, which I thought would lend somewhat of an interior feel, for variety. Here are those locations. 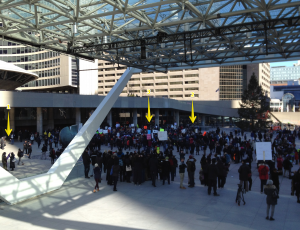 Here are a few takes from the session.

The first is a recording an amusing “You are fired!” crowd chant.

The next take was interesting. It began with the most common chant: “Hey hey, ho ho, Rob Ford has got to go!”

After a few minutes the drums burst into double time, causing the energy to leap. I split that into three takes while mastering: normal time, double time, and the progression from one to the next. Here’s the double-time take:

This final take is one of my favorites. It combines a sing-song nature with the rhythm of a chant. It also has a rousing, triumphant feel that highlighted the protestors’s solidarity. It’s also indistinct, which gave it flexibility.

I worked on two field recording ideas during that session:

When a field recordist skips scouting, they must adapt. You’ll be forced to think on your feet, and listen keenly. It’s easy to let your ears relax when field recording. After all, you can always fix field recordings later when mastering, right?

Save yourself hours of work by scouting. Sometimes you can’t, though. In those times it’s important to adapt.

Part of this is responding to technical concerns: weather, RF, and problem sounds. That’s also balanced by responding to your subject, too. It won’t always “place nice.” Sometimes sound fx are unpredictable. Animals, nature, and people are common examples. In my case, the protest crowd responded to emotion, which was hard to predict.

How to Adapt to Unpredictable Sound Effects

Remember, it’s far harder to adapt than to scout. So if you have a choice, scout. When you can’t, remember those four steps.

Let’s not forget I was recording for The Sound Collector’s Club, too. How can you target your field recordings for an unknown audience?

The answer is simple, but it’s a lot of work: when you don’t know your audience, you need to record and provide every option.

How many Club members would need a chant that mentioned Rob Ford? Not many. Just the same, I knew that there were some Torontonians in the group. So, I recorded a few takes mentioning Ford. For the rest of them, I wanted a more general feeling, but still retain the emotion.

I circled the crowd at its perimeter to avoid “pop outs” or detail that would feel out of place. I ended up slicing out any close activity while mastering to emphasize that slant.

But that was my session. What about yours?

How to Record For an Unknown Audience

That will get the job done.

A Twist in the Craft

So, wait. Are these ideas really new? Let’s see: watch your gear, listen, observe, and respond. You’re doing that in one way or another while recording, anyway, right? And what about providing a detailed, organized delivery to help the greatest amount of listeners? Surely, that’s just common sense?

Yes. But there’s something else behind these simple tips, too.

We’re used to working in ideal studio environments. We spend most of our hours in conveniently soundproofed rooms where microphones and monitors can be assembled and adjusted carefully within millimetres.

It’s easy to take all that for granted. Working in even slightly different environments deserves rethinking once we leave our edit suites. So, the interesting idea behind recording unpredictable sound effects for a random audience is not really about a handful of tips. It’s about a new challenge: relinquishing control.

As field recordists, our best work often depends on the opposite. Results often demand precise control: setting levels, operating sophisticated gear, and arranging microphones “just so.” Accepting the lack of control, adjusting your work, and providing creations with the ability to be interpreted by others beyond your own intention requires a twist of the craft.

That affects your creativity. It also allows you to produce something new in your field recordings: fresh sound effects deeply embedded with your skill adapting while ensnaring slippery, unpredictable sound.

Interested in the idea? The Sound Collector’s Club is a way to try it out. It’s a good challenge. It’s a great exercise. Sound in nature is rarely static. With a bit of practice, you’ll be able to adapt quickly to sound as it evolves and twists around you.