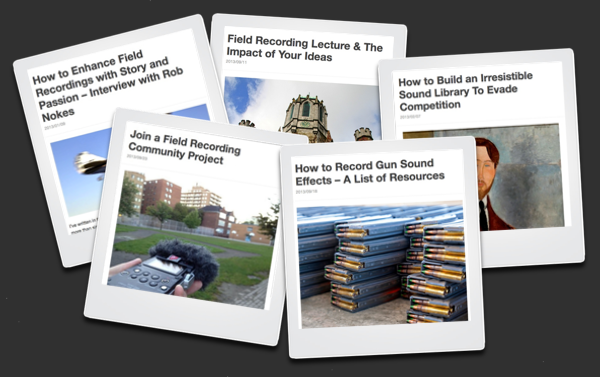 At the end of every year I share a retrospective on the field recording articles of the previous year. If you’re new here, it’s a good way to get an overview of what the site’s about.

I’ve included a brief comment with each article describing what it is about, and why I wrote it.

Thank you everyone who visited, commented, Tweeted, and emailed in 2013!

When 2013 began, I decided that I wanted to focus on writing about sharing sound effects. That became a major theme for the blog, and I also released a book about the topic, Selling Creative Sound.

I branched out into a few other themes, notably interviews, and community.

In 2013 I introduced a new feature: interviews. I wanted to share provoking ideas from exceptional people in sound.

I wrote a few posts about field recording itself, and the step that follows it, mastering. The posts share tips, find inspiration, and explore new ideas.

As 2013’s theme, sharing sound comprised the majority of the posts.

Field recordists often work on their own. That doesn’t mean that we’re alone. There are thousands of us worldwide. I explored some ways to connect with others in these posts.

These posts are a mix of other themes I like to write about here: creativity, pro audio, productivity, and more.

It’s been a while since I’ve posted regularly. However, I have eight articles lined up already for 2014.

Curious about field recording or sharing sound? Feel free to ask me what you’d like to read about.