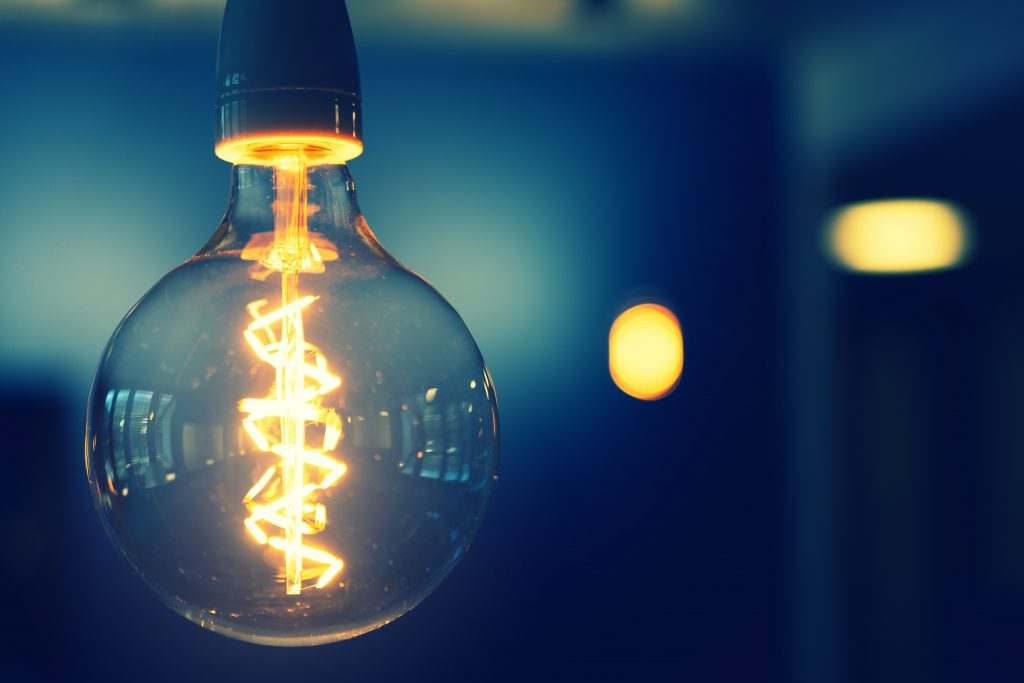 I recorded about 16 GB of raw audio from the Honda Indy in July. That had me mastering sound effects for about a week straight.

As I sat there working, I thought about tricks editors use to get the job done. We’ve all heard about the superstar plug-ins that deliver impressive results. We’ve read posts about layering impacts with gunshots or thunder booms or metal door slams. Pitch shifting and reversing tricks are in the first pages of any editor’s handbook.

However, often the most helpful tips come from smaller changes. Not every trick is profound. Sometimes they address smaller issues, like making your workflow faster and easier.

Do you feel entangled in endless mastering sessions? Feel a need to simplify things? Are you worried about losing hours of processing from a careless mistake? Looking for ways to cut more quickly? Want to improve the overall quality of your work?

Each editor develops their own tricks to do all that. I’ll share eight I used while mastering the Indy tracks. I’ll include four today, and four next week.

The Trick About Mastering Tips

Everyone has their own editing style. I record ambiences, mostly. That means I master stereo tracks, sometimes quad. You may record with sixteen channels and a spread of microphones. Every field recordist captures and masters clips differently.

So, today I’ll suggest basic, global tips anyone can use. They’re not meant to be workstation-shattering mastering revelations. Instead, they’re general tips to help those interested in and new to mastering, whatever your subject or layout.

Mastering, while important, is admittedly more repetitive than actually ensnaring the field recordings. For this reason, I’ve included them to help free up your time and tweak your workflow to make mastering easier. They’re intended to be small, simple tips that can improve your work without much effort.

My hope is that they’ll help you to master more easily, to move beyond editing robotically, and think about mastering differently.

You have hundreds of raw files and a handful of tracks. What can we do to make the tasks of mastering easier, so we can focus on other things?

When mastering simple stereo files, we drag all raw tracks into a session so they line up side by side, like this (click for a larger image):

You then chop up the audio as you go, and the final edit will look like something this:

That’s great. However, I ran into a problem when cutting the Indy recordings. I lost track of the car models. I needed to review the originals again.

That wasn’t easy. I had renamed the cut files. The final edits were jumbled. I had moved regions around. Locations had slipped in the timeline as I closed up edits. It was tricky to track down the source tracks and slates.

To prevent this annoyance, I duplicate the raw tracks as soon as I pull them into a session. That way there are two tracks with the same audio. I turn off one track’s voice, mute and lock it for good measure, shrink it down, then tuck it away at the top of the session. That becomes my “safety” or “raw” track, which I don’t touch. This keeps a reference handy, but out of the way.

This image shows a preserved track at the top, and the edit track below it:

Did you edit too aggressively? Processed a track too far? Perhaps you need to recall the original sequence of your clips? Maybe you need to trace when a cut track originally began or concluded? Safety tracks help you fold back to your original work, displayed in a consistent timeline.

Imagine you’ve spent a half hour cutting a track. You’ve snipped out the bumps, mic jostles, and foot shuffles. You’ve applied perfect fades to stitch the audio into a smooth, polished sound effect. Then, the next time you return to your track, you find a segment missing, or the edits are pulled apart. What happened?

Perhaps you highlighted the wrong track while deleting. Maybe you forgot to deselect a region, and dragged it away when working with others. Perhaps you pasted foreign audio on top of your work. Pro Tool’s shuffle mode is a common culprit in these situations. It can dislocate regions from each other. Whichever the case, your careful work will be lost.

When you’ve finished mastering a track, take a few seconds to lock the regions in place. This prevents them from moving, or being overwritten. This is especially helpful if you’re doing other work before bouncing out your audio.

Give your raw sound effects a new track for each recorder, location, perspective, or performance.

This is expected in multi-channel sessions. Those have 3+ tracks running simultaneously, and they all need their own real estate when lined up above or below each other. However, this helps when mastering stereo files, too. How?

I’ll share an example. At the Honda Indy, I used two recorders to capture four races at five or six locations, over three days. Typically we would stack all of these recordings left to right in a single stereo track, like we saw above. Then we’d and edit them one after another, proceeding left to right:

However, each recording sounds different from the others, of course. Some may have different stereo widths, or microphones, or perspectives. It makes more sense to cut similar sounds at the same time. Why? Well, I don’t want to be switching back and forth between two microphones, for example. That would mean I may have to readjust levels, panning, or plug-ins. However, I don’t want to slide the tracks out of sequence to group similar perspectives either, since the order of races is important.

To solve this problem, I create new tracks for each of different style of recording. Then I drag down each different style into its own track. I don’t shift them left or right, since that would jumble the timeline. For example, let’s say I wanted to cut just one microphone at a time: 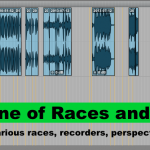 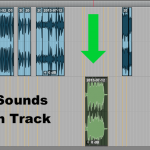 This idea is known as checkerboarding. It’s common when editing drama, but it’s incredibly useful when mastering, too. How?

Well, I may create a track dedicated just to distant recordings. I’ll cut those all at once. Then I’ll have another track for sounds recorded at one location (say, race track turn #3), and cut those together.

Here’s how I organized my first Indy session. The track names on the left explain my mastering focus for each track:

In this case, I created a new track for each recorder I was using at the race (Sony D50 and Zoom H4n, which I named “D50, Edit” and “H4n, Edit”). I also created a new daughter track for each of those, called “D50, Specs” and “H4n, Specs”. I use these “Spec” tracks as a placeholders to dump any specific sounds I found interesting from within the longer files. In this case, I pulled out single passes I liked from the top track to the one below, and edited them there during my next left-to-right pass:

That also has the nice advantage of allowing the specific sounds on the second track to be traced back to the edit track, if I need to revisit something.

And here’s an image of the entire session done in this manner:

In the example above, I cut those tracks from left to right, top to bottom, just like a typewriter. That meant I worked consistently with one recorder, microphone type, and pick up pattern, then shifted to the next:

In that example I focused on just one criteria: recorder type. If I wanted to focus deeply, I could have created a new track for each type of race I recorded (e.g., IndyCar, Indy Lights, Pro Mazda), or location (e.g., at turn two, or turn nine), then mastered just one race, car, or location at a time, from left to right.

Why bother? Doesn’t this just make your mastering session bulky?

The most obvious advantage is that it simplifies your mix desk. You can apply EQ or plug-ins to one prop, location, recorder, or microphone across an entire track of similar takes. That removes the need to bypass plug-ins when you encounter a radically different location or prop.

There are also creative reasons. If I’m working on one type of car consistently, I’ll become familiar with its nuances. I’ll know I need to accommodate for its specific blast of backfire, or the whine as it accelerates away. When I concentrate on one location at a time, I’ll learn its foibles, how much traffic bleed soaks in, and how to fix it. This speeds up work, and ensures final tracks sound consistent across car type and location.

One quick, basic tip before we break for the week.

A Pro Tools bin quickly populates with thousands of regions. I regularly remove all extra regions from my bin (Bin/Select/Unused Audio Except Whole Files menu item). 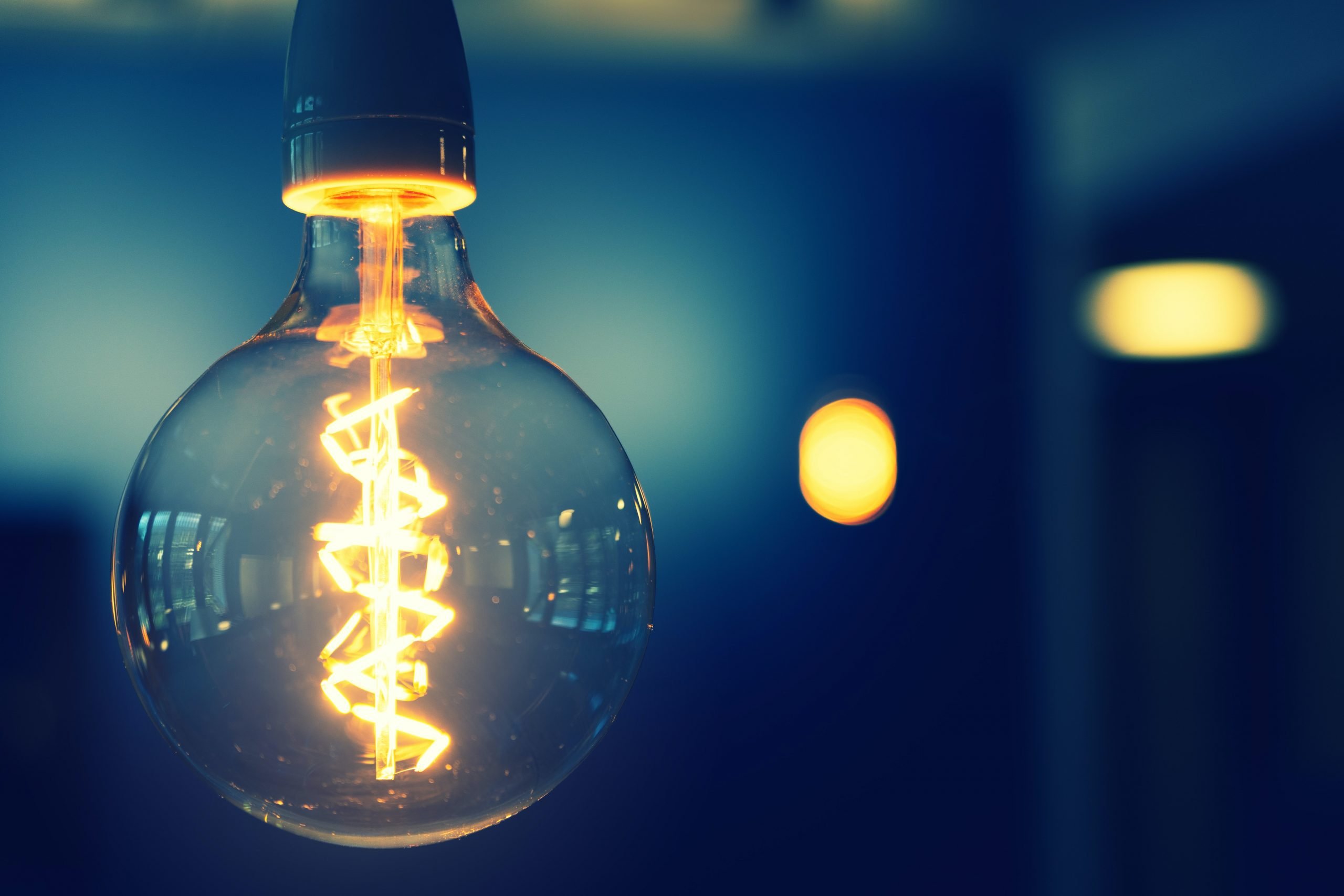