You are here: Home / Technique / 5 Tools To Help You Slate Sound Effects 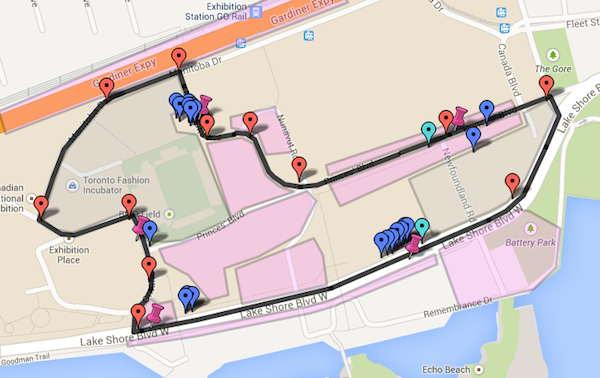 Over the past two weeks I’ve been writing about slating field recordings.

The first week I explained how to slate, and some ideas why it’s done. Last week I shared a checklist for slating sound effects:

Clearly, there’s a lot to remember when slating. But there’s plenty already happening during a field recording shoot.

I recorded the Honda Indy in July. It was a challenging session. I realized that I needed some help creating good slates while juggling the demands of capturing clean, powerful race car recordings. So, I looked for a little help from slating tools.

This week I’ll share the tools I used, and how I slated at the Indy.

Slating at the Honda Indy

I’ve mentioned before that I like stealth and guerilla field recording. Why? There’s less control. It’s trickier to capture a good take when you’re forced to be inconspicuous, or when you’re sprinting after cool sounds as they happen. Because of this, tracks may fail. However, when they succeed, they are incredibly evocative.

Why? I couldn’t slate verbally at the race. I’d be discovered. I was on the go, so any time I devoted to slate would intrude on the valuable seconds of rare audio leaking away.

Of course, slating is absolutely vital to detail the character of a shoot. So, I’ve been looking for away to slate well while undercover, or on the run. My stealth and guerilla slating solution needed to be:

Much of what makes the sound effects I hunt distinctive is their location. They are recordings of a particular place, time, or event. It’s one reason why I like soundmaps. Field recordings are almost always experienced divorced from their original location. In a way, this is cool, since it invites imagination. But, I also like the idea of rooting sounds to a particular place on the planet. Why? It’s an opportunity convey greater immersion. So, as a bonus feature, I wanted a way for my slates to mesh with the sound effect’s original physical location.

How could I do all this?

By using an app.

The Recording is Paramount

An app? What about operating the gear? Toying with a smartphone while your 722 recorder chugs away? Appalling! Surely, that’s irresponsible field recording technique? Or, in the very best case, incredibly risky?

Don’t mistake me. It’s absolutely critical to be intimately aware of how equipment is working: leaps in level, gear failure, how microphones gathers sound, and so on. This is especially vital when recording specific sound effects. However, there is a slim chance of wiggle room when recording stealth and guerilla atmospheres. If we’re lucky, if the audio is consistent and predictable, there’s a good chance that these takes can roll untouched for a few moments. That can free a field recordist to briefly turn their attention to other things, such as slating.

But I want to be clear: if using a digital slate would risk your recordings, you must skip it. However, if you can free up a second or two to add a slate, do it.

In my case, the Honda Indy takes were indeed consistent, and rolled for three to seven minutes. That provided a few opportunities to explore unconventional slating ideas.

So, my first thought was to slate with a smartphone. It was certainly inconspicuous. Everyone has one by now. With a ringer off, it would be silent. Being a portable computer, it could capture endless information. And, with GPS, it could find the exact location of my field recordings.

I’ve search for a long time to find a perfect app to do this. Here’s my wish list for a field recording slating app:

So, are there any apps that do this?

My first thought was to search for clapperboard apps. There are many of these. They are able to auto-increment, and organize takes by project. They had timecode. However, they couldn’t save extensive details about each take. That ruled them out.

So, instead, I sought out unconventional apps that could get the job done. Here are five options I explored.

The Importance of Slating

Would it be better to take twenty or thirty seconds to slate verbally into a microphone?

Yes, of course. That’s always preferred. However, apps help slate during inflexible stealth or guerilla field recording sessions. These apps capture dozens of slating details with a few taps: location, time, and broad info (via a photo). You can tap out notes and observations as time permits. It’s incredibly helpful when you feel constrained, and cannot slate how you’d prefer.

And it’s important to note one more thing. Slating with apps is only useful during consistent takes where levels and equipment aren’t expected to alter much. That frees up your time to absorb details about the sound effect and its environment, and add them to a digital slate. Remember, though, attention to your equipment is paramount. Slating with an app is pointless if you ignore peaking levels, or brimming hard drives. Recording properly is always your first concern. However, if you do find you have a few seconds to spare, slating apps can help add valuable details to your takes.

Of course, there are dozens of other ways to slate. These are just five examples. Pick whichever works best for you. Whichever method you choose, remember that slating well is vital. Why?

It improves your recordings. It helps when mastering. It aids listeners later. It documents meaning, and adds depth. And, when done well, it has the potential to provide even more: like metadata, slating wraps an experience around field recordings, and, when we’re lucky, it delivers that into the ears of your fans, too.