You are here: Home / Curation / Five Reasons Why A Sound Effect’s Name is Vital 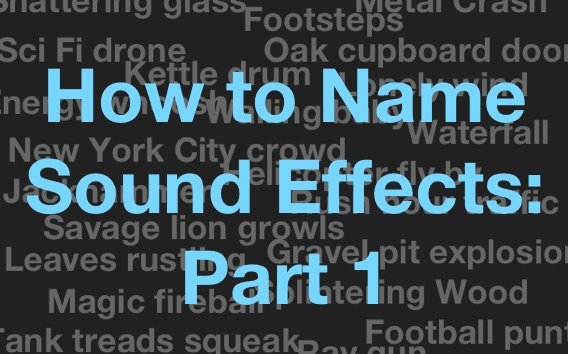 A sound effect has a long lifespan.

In my book Field Recording: From Research to Wrap, I said that sharing sound is inherent to field recording. We capture sound so it can be released elsewhere: in the projects we work on, or for the fans who are listening.

Sharing sound clips happens in two ways. The first is by transmission: you can share audio by playing it (alone or within projects), sending it to someone, or so on. Another part of sharing a sound is being able to access it. Or, in other words, being able to find it. After all, we all have thousands of sound files in our libraries. We need to locate them to use them.

I’d like to write about just one part of how a sound effect can be found: by its name.

Today we’ll take a deep look at the ideas behind naming sound. I’ll explain five reasons why a name is a vital part of a sound effect. It’s about the philosophy behind naming a sound. I’ve written it to get us thinking.

Next week we’ll look at a more practical aspect of naming sounds. I’ll share helpful guidelines for naming any sound library, and hazards you should avoid.

A sound’s name can be created quickly. It takes only seconds of tapping a keyboard to compose a name. This is usually done during mastering. However, a name has such a large impact on sharing your sound library that I’ve dedicated an entire chapter to the idea in my upcoming book, Selling Creative Sound. My hope is that the ideas will help you share your creations more successfully.

The Importance of Sound Names

I’ve thought a lot about naming sound effects. It began during my seven years working at Sounddogs.com. One of my roles was to find and approve new libraries for the site. I would evaluate submissions and decide if they would be valuable enough for our customers to add to the website. I rejected a lot of libraries. Why?

Well, sometimes the recordings were uninteresting, poor, or sloppily-mastered. However, it was just as common to reject a library based on poor names or descriptions. After all, cleaning up these names required a lot of detailed labour, much of which couldn’t ever be recouped by the sales that library would generate.

I would say around 5% of non-corporate libraries had decent names and descriptions. The rest were written at a grade-five level: scattered with spelling mistakes, poor grammar, punctuation and capitalization errors, and inconsistencies.

Surely I’m being too critical, right?

Well, it’s no secret that I like English and writing. Perhaps I’m biased. But it wasn’t about what I preferred. At Sounddogs I was also in charge of paying partners their royalties. I saw that there was a direct relationship between the name of the sound and how well it sold.

I’ve consulted for many other top Web shops since then, and this pattern has been consistent. It is true whether a shop sells sound effects, or music.

Think about that for a second. It’s unlikely that the popular tracks were field recordings captured with the most skill. Instead, they were merely ones with compelling names. What does this mean?

It means that as the amount of similar sounds in library grows, the stronger a sound’s description impacts its success. In fact, after a certain point, the name becomes more important than the audio itself.

To field recordists this can be a shocking revelation. Isn’t your craft in the field paramount? Yes. However, all your work setting levels and embedding your passion into recordings doesn’t matter if no one can find your sounds.

Perhaps you’re not interested in selling sound on the Web. Maybe you just want to share your library with co-workers on a network drive, or a sound-sharing collective. Perhaps you simply need to find clips for yourself. The effect is the same: a sound’s name has tremendous importance. It allows access to your creations.

Over the years I’ve had time to test this idea with my own Airborne Sound library. I’ve repeatedly overhauled my sound library names. I’ve performed experiments with descriptions to find the impact a name has.

One example I tried was with a batch of ocean recordings I captured from a wintery Nova Scotian coast. Sometimes I became lost in the sound of the waves and recorded up to twenty minutes of a single track.

Back in the studio, I decided not to let the entire twenty minutes go to waste. I split it into six 3.5-minute tracks, and gave each a radically different name.

Some tracks I left simply:

I added more specific words to others:

The result? Those names with the specific, colourful words outsold the others ten to one, even though the recordings were essentially identical.

This is important if you want to sell sound effects. A good name can mean the difference between someone auditioning your sound or choosing another, between a sale and a pass. Repeat that decision for the thousands of people who surf a Web shop daily, and you’ll understand the impact.

The Best Way to Describe Sound

What, then, is a better approach? What’s the best way for someone to understand a sound effect?

By listening, of course. This isn’t practical for creative workers, though. We can’t possibly audition every second of each clip we’re curious about. There’s not enough time to do that. So, we need a quicker way to understand a sound, compare it with others, select it, and get back to work.

In a perfect world we’d compare and find sounds in terms of the audio itself. The most accurate way to find and sort clips would be based on qualities of sound. Some ideas:

Future sound searches may include these features. Right now, however, the technology doesn’t really exist. (I believe Soundminer’s retired Sounddigger was an exception).

What’s common in the list above? It’s almost completely objective. It’s defined by the physical nature of sound. It would be the ultimate “advanced search” for sound effects. It could provide incredibly precise results. But, while something like that would be accurate, it’s cumbersome. Why?

Well, sound designers and editors are creative people. They don’t respond as well to stats as they may to experiencing and appraising the audio itself.

The Meaning of a Sound Name

So then what’s the next best method?

Text, of course. It’s easy to imagine, and to apply. However, it has difficulties.

Duration is the most helpful text-based, objective way of comparing sounds, but beyond that, using text to describe a sound invites a problem.

As you move away from the physical descriptions above, the more inaccurate a sound file’s description becomes. Why?

The tricky thing is that text has no direct relationship to audio. Part of this has to do with linguistics, or the study of language. Words are symbols for meaning. The lines and curves that we draw to make letters have little connection to what that word represents. The shape we make when drawing the word “dog” has no direct relationship to a small, fluffy, yipping creature. But what does linguistics have to do with sound?

The concept is the same with sound file names. The text that we use to describe sounds doesn’t immediately relate to what we’re hearing. One listener may say that a thunderstorm ripples. Another may say it booms, grumbles, or murmurs. Neither person is completely right, or utterly wrong.

While the list above was objective, applying text names becomes subjective.

This is why naming a sound effect is so important: using text at all when describing a sound file risks misinterpretation. As I saw in the libraries I ingested, this is common, and can have a dramatically negative influence on a sound library’s success.

Why A Sound Effect’s Name is Vital

Why is this true? Why is a name important to a sound effect?

On first impression it’s common sense, of course. A better name is more useful. It’s helpful, though, to look at the exact effect a name has on audio in particular.

And, while it appears to be common sense, it is consistently overlooked by most collections. That tells me that sound librarians aren’t seeing the relationship between naming and a collection’s success. Another possibility is that people who produce or sell sound libraries don’t actually use them afterwards.

Here are five reasons why naming audio well is important:

What You Can Do

You record sound effects to share them, and use them. If a sound effect name isn’t compelling, it won’t be auditioned, and won’t be used. This means that all that time you spent scouting a location, choosing your microphone, setting levels, and performing your prop will have gone to waste.

Do your sounds have terrible names? Short, vague descriptions? Lacking a “system” to your library?

It happens to everyone. As I’ve mentioned, I’ve reworked every one of my 20,000 sound effects multiple times, and the library’s still not perfect. Even top sound effect libraries I’ve ingested have needed substantial work on their names. And these collections are selling for thousands of dollars.

Start thinking about improving your sound library’s names now. If you’re sharing sound, it will give you an edge on the competition. If you are simply using large libraries daily, it will help you find, sort, and use better clips more quickly.