You are here: Home / Interview / Creating an Experience with Sound Effects – Interview with Frank Bry 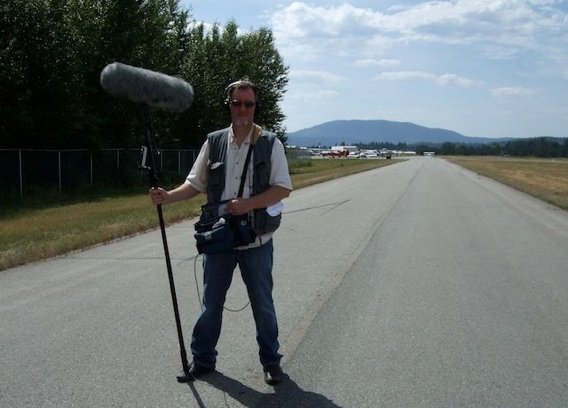 How can you record great sound effects?

However, as a listener, these things rarely come to mind when we hear an impressive sound. It’s similar to watching a movie: we never wonder how the gaffer lit a scene. That may come to mind after, of course.

It’s the same with sound effects. Whether hearing them on their own or skillfully blended with other audio or video, our first reaction is to simply experience them. We react to booming thunder, a crisp gunshot, or forlorn, howling wind. But, after we’ve assembled our gear, flicked the switches and turned the dials, how can we as field recordists create an experience for our listeners?

One field recordist who knows is Frank Bry.

Bry is a pioneer in the world of sharing sound. He posts frequently on designingsound.org, sonic-terrain.com, as well as his Twitter stream and field recording blog.

Bry is well known for his voluminous collections of tricky sound effects. His recordings are known to be pure and powerful. But his recordings also contain something more: instinct, inspriation, and “vibe.”

Frank kindly spent some time answering questions about his origins in sound design, how he shares sound, and his method for evoking the best possible experience for his listeners.

From Sampling to Sound Design

Frank Bry was introduced to sound recording the same way as many other field recordists: through music.

Bry began playing bass to Led Zeppelin songs with a high school friend. They eventually committed their own songs to tape. The recording process intrigued Bry: after high school he worked as a recording engineer, and later operated his own commercial recording studio.

It was during this time that Bry began experimenting with audio. He used an E-mu Emax sampling keyboard to record his own drum sounds. Sampling fascinated him. The gear he used in music recording began to function less as an instrument itself, and instead became a means to interpret and express sound in new ways. He began smashing and breaking things, and adding these effects to his mixes.

Bry continued to explore sound effects sampling, and bonded with local Seattle fans of another sampler, the Emulator III. Word of his sampling skills spread. “After a short while my name got around Seattle attached to the words ‘sound designer,’” Bry said.

This reputation secured an invitation to create sound effects for a radio and television campaign for the Goodwill Games sporting event. Bry had never done sound effects work before.

“I was excited and terrified at the same time,” Bry explained. “I had no idea what I was doing.” 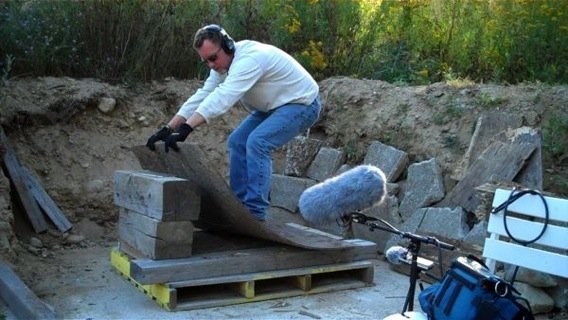 A Different Way of Sharing Sound

It signalled a shift in Bry’s career, and he soon began creating audio for video games. He also continued recording and creating sound effects throughout the 1990’s, and contributed work to commercial CD libraries by publisher Sound Ideas. He had broader ideas about sharing sound, though.

He created his own website, and gave away free MP3s of his recordings. They were a success. “People like free stuff so they came in droves.”

Impressed by the calibre of his tracks, pro sound designers began asking for high-quality recordings to use in their own projects. He began selling sound effects for $5 per clip.

“It was a tedious, hands-on process,” Bry admitted. “I started looking into ways to automate with digital downloads.”

Sounds were already being sold on the Web from massive, database-driven à la carte websites offering thousands of clips. Bry had a different vision for sharing his work.

“I had thousands of sound effects in my archive and I wanted to share them, but I did not want to do the single-sound model like Sounddogs.com,” Bry said. “So, I started putting like sounds into what I call a SoundBox.”

Bry made his move as Web tools became sophisticated. WordPress and third-party digital delivery solutions allowed Bry to share packages directly with fans. “I wanted to do it earlier, but it took a while for the tools to arrive and be relatively simple and stable.”

And, in 2008, the first version of his website shop arrived: therecordist.com.

Dozens of sound effect shops were already strewn across the Web. However, word spread quickly about Bry’s SoundBoxes and The Recordist store. Why?

Bry approached sound effects recording differently from existing industrialized publishers. While most of these libraries and websites offered a scattering of sound effects, or a broad category of clips, Bry considered sound effects more carefully. He created his collections with a specific theme in mind.

Other sound libraries released atmosphere libraries. Bry took this idea a step further: he created collections of only wind. Other SoundBoxes were similarly focused: rockslides, water, thunder, and even leaves. The collections were instantly popular with fans.

While other field recordists had begun collecting and sharing sound effects based upon a single theme, Bry’s collections were different. The collections were large, and gathered across months, or even years of effort. They were clearly the product of hundreds of hours of time in the wild, and in the studio.

But how does such an extensive project begin? I asked Bry how he chooses a theme for his recordings. The answer?

Instead of consulting balance sheets of sales projections, Bry trusts instinct, and inspiration.

“I have no idea where the idea for a subject comes from most of the time,” he told me. “If I hear something when out and about I get curious and start thinking about whether or not it’s viable to record.”

He stressed that recording a collection isn’t a clinical, calculated process. It’s more intuitive to him. "I don’t think I am actually conscious of recording a theme deeply; I just follow where the universe sends me.

“Some collections come very easily and some take much more thought. I am always thinking about how to best acquire and express each theme. Most of the time I’m inspired by what I hear around me when recording.”

“Once I latch onto a particular topic, I become obsessed and record as much of it as I can.” 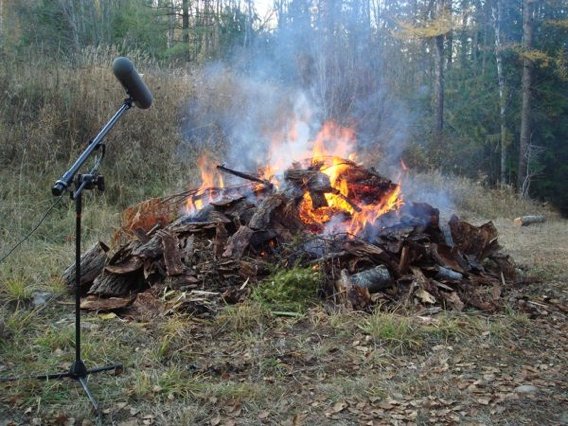 This begins Bry’s journey to explore as much about a sound’s voice as possible.

“Some ‘one topic’ sounds take years to record,” he said. “Thunder, for example, is very tough to record. I record as much as I can when it happens, which at times can be very frustrating.”

However, Bry acknowledges that sound, especially when collected as a theme, has an unusual limitation: the depth of focus on a single topic can lead to endless recordings. “I do not think my libraries have ‘complete,’ coverage” he said. “That would be almost impossible.”

Instead, Bry embeds flexibility into his recordings. “My fire library, for example, has many different types of fire. I was not able to record everything that fire can do but the sounds in there can be used in fantasy video games, action movies, television dramas, and many other types of audio projects. The fire can be blended and moulded to fit just about anything flame-based.”

Is it possible a theme can capture every expression of wind, explosions, or freight trains? Is there a moment when every voice has been captured?

To be certain, Bry runs the collection through his own personal QA before finishing: “I ask myself: ‘Is this stuff I would use? Is there enough coverage and variety?’ After the initial evaluation, I move on from there and fill in the holes as best I can.”

I asked Bry if focusing on one topic makes it easier to create his collections. When does he know a library is complete and he can hang up his Rycote?

“I’m not sure they are ever done,” he reflected. “I do release many sequels, and it seems to make sense to me. I constantly play through all the session files one by one to get a sense of what else is needed to make a theme feel good. When I think it stands on it’s own as a decent, creative collection, I wrap it up.”

Coverage is only one facet of sound library, of course. A successful collection needs clean, accurate recordings as well. However, to resonate with listeners, sound clips must include something more. How does Bry include this in his field recordings?

His approach began with his work in game audio.

“I spent years working on games and sometimes had trouble finding the right source for the style of games I was working on. I would record a great deal of my own material when I had the time. I learned to perform the sound I needed and was not very concerned with the recording gear. My main goal was getting the right sound to feel good.”

In a way, sharing sound effects on his website has complicated this vision. What may be good for one sound designer may not fit the needs of another. I asked Bry how he copes with the variety of demands from his fans.

“I do consider how people will use the sounds and that’s the tricky part,” he told me. “It’s difficult to cover all the bases because everyone has unique needs for a project. I tend to record sounds that can be used over and over again and in many different situations.”

Part of this, he mentioned, has to do with evoking the best interpretations from the sounds. “When I record something I do my best to get as many diverse performances as possible.”

And how is this done? Bry’s musical roots contribute directly to his field recording style.

“I treat a sound effect recording as a performance in a way much like a music performance,” Bry said. “Everything makes a sound when motivated to do so, and I pay close attention to the vibe and energy it makes and go from there.”

He shared one example of this while recording his North Country Trains collection.

“I wanted to capture the ”vibe“ of the trains here,” he said. “I live in a wide-open, sparsely-populated area and when the trains rumble through you can usually hear and feel them. I chose exteriors and tried to get the huge railcar and engine movement sounds as they made their way across the county.”

Bry doesn’t leave the “vibe” to chance, as seen in his Ultimate Foliage collection: “When the wind blows through the trees and this beautiful leaf movement sound occurs, I try and record it the most expressive way I can, and sometimes I set up rigging to make the trees move the way I want them to.” 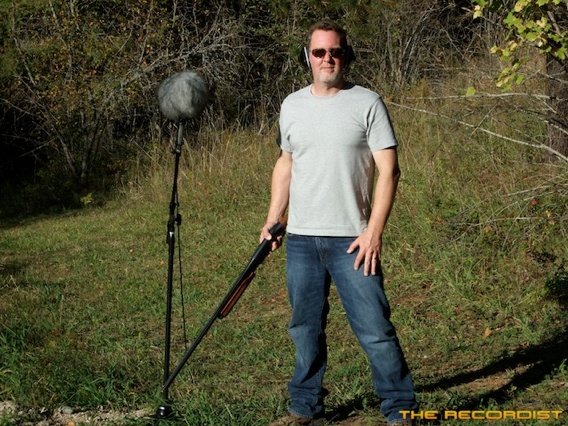 But where does this vibe grow from? How does Bry detect it, and embed it into his recordings? How can new recordists cultivate their own creativity?

“One of the things I try and do is record with passion and emotion,” Bry told me. “I have a crazy imagination and while I’m recording I have images and ideas flashing through my mind.”

However, Bry acknowledges that the structured nature of field recording is often at odds with this. Just the same, he suggests new recordists should push their boundaries: “Some of the best recordings I have are when I took a new approach or just winged it. Do your best to do things a little differently. Take risks, not physical risks but creative ones and most of the time you get surprising results.”

Bry’s secret? “Follow your creative instincts. We all have them. It just takes practice to learn when to listen and when to take a nap.”

Many thanks to Frank Bry for sharing his time and his thoughts!