You are here: Home / Technique / Field Report / How To Master Sound Effects — Before Recording Them 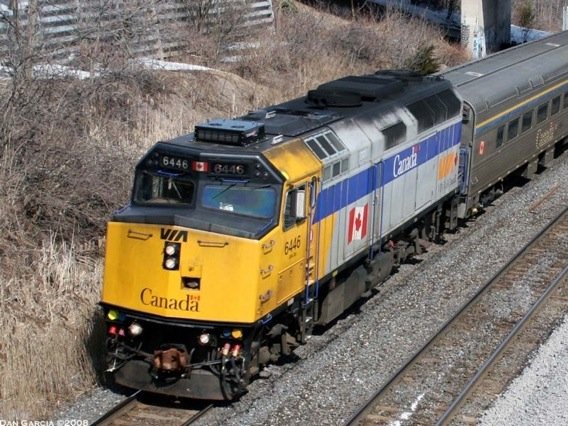 I’ve enjoyed recording freight and passenger train sound effects over the past year. I wrote about my experiences capturing them here, and here.

Early in January I had a chance to record another engine. Last week, I finally cut it. And, while I was editing, I remembered an important trick: mastering your clips before you capture them makes field recording quick and easy, and invokes strong, valuable sound effects.

Yes. I’ll explain, using the passenger train recordings as an example. First I’ll share how I cut the sound, and continue next week with ideas to help strengthen field recordings.

About the Train Sound Effect, and Recording It

The train was a passenger train pulling four cars. It was Via Rail train 71, engine 6446. The model is a GPA–30H, or, as it is more commonly known, General Electric’s P42DC model.

It is notable in locomotive circles because of its low height, allowing it to pass through the constrictive tunnels found in the north-east. These locomotives are the main model used by Amtrak.

The sound you will hear is courtesy of 4,200-horse power V16 4-stroke diesel engine, which allows it a maximum speed of a startling 161 kilometres an hour.

It’s a basic performance: it idles, then pulls away.

The idle is dense and monotone. It also feels narrow. You don’t get a sense of wider space until you hear the air releases, the bell, or when the train is pulling away.

It’s not as dynamic and lush as I’d prefer. Frankly, it’s a bit bland. After all, the idle is 75% of the sound. However, it’s simple, and this makes it a good example to show how mastering your sound effects before you record improves your work.

So, the goal today is to focus less on the audio quality per se, and more on considering a sound effect’s final destination.

I recorded this train in one take. You can see a screenshot the original clip here. 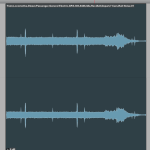 I then cut this clip into five separate files.

I’ll explain how I cut them.

I split the two main performances of the train: the idle, and the departure. Here are images of each. 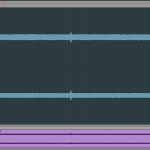 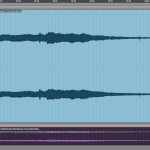 I gave the departure about five seconds of idling before it pulls away. This was intended to help cross-fade any other sound into the departure. Cutting the departure tight, or starting precisely when it departs, would make it trickier to cross-fade with sounds before it. So I left a bit of the idle at the start as a handle so editors have a bit of flexibility to blend the departure with another sound.

I gave the beginning and end of each clip a slight fade. Some sounds may pop or startle listeners when auditioning. I add a fade to start and end a track gracefully.

You’ll notice that I added a long fade at the end of the departure. It’s true that large fades like these abandon much of the audio during the fade out. I find it helpful with vehicle departures. There’s not much going on in the sound at that point anyway. The fade makes the track float away pleasantly. It’s a matter of preference, though.

The resulting idle was about 2:44 long. That should be long enough for most scenes in films and television. However, there’s a possibility that a scene may be longer. In this case, an editor would need to repeat the clip. This is typically done by adding another copy of that idle to the end, and blending the two clips with a cross-fade.

I wanted to save editors the trouble. So, I created two loopable versions of the idle. A loopable track repeats seamlessly, end to end. There’s no need to edit them. They simply stack side to side perfectly. This extends the duration of idle without the need for editors to cross-fade the clips.

I extracted pieces from the long idle to create two loopable versions:

Here are images of the edits for each loopable version. 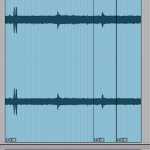 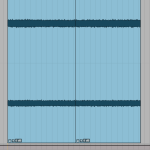 Creating loopable files is optional, but I like doing it. Why? It gives editors options. If they merely need a consistent background tone, they can pick the steady idle. If they prefer something with a bit more texture, they can use the idle with a few air releases. The loopable format allows them to add the clip to their timeline, then repeat it endlessly with little effort.

I create sweeteners when mastering.

What are sweeteners? They refer to distinctive, short sounds that can be used to supplement others. There can be many kinds of sweeteners. In this case, the sweeteners were the air releases.

I gathered the sweeteners in a series file. This collects all the characteristic air releases in sequence into their own, short clip. Here is an image of the series file. You can see how I extracted clips from the long idle, then crammed each air release one after another. 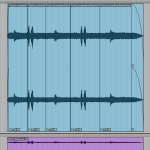 Why is this done?

The long idle has a number of air releases scattered throughout it. The editor can’t control when they occur without chopping up the file. Again, this takes time we’d like to avoid.

Sweeteners allow an editor to pull a single, isolated air release from the series file, and drop just that small clip into their scene timeline wherever they like.

This is especially useful in scenes with dialogue. An air release occurring at the same time as dialogue will compete with it. The release will be loud, and obscure speech. Sweeteners, or series tracks, allow an editor to extract a single air release, then fit the small segments around the dialogue.

A series clip collects all the characteristic air releases in one short file. The editor can refer to it to find the releases in one place, instead of hunting and pecking through the other train clips.

Cutting an idling train isn’t a massive technical feat, of course. Idles and departures are straightforward sounds. Cutting them is simple.

The idea isn’t to display editing wizardry. Instead, basic sounds can give us a glimpse at the role mastering plays in field recording for even a simple sound recording.

How exactly is this done? Why is it a good idea to think about mastering before you even begin to assemble your gear? How can you do this in your own field recording sessions?