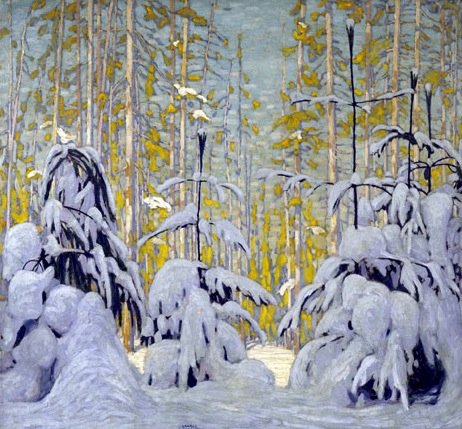 Last week I visited the Art Gallery of Ontario for two sound-related reasons.

The AGO, as it is commonly referred to, is Toronto’s largest art museum. It’s known for a large collection paintings created by The Group of Seven, a collective of Canadian artists who worked earlier last century. The painting above, Winter Woods is by Lawren Harris, one of the group.

I needed a creative recharge so I decided to take my own advice and find inspiration from something different than audio.

As readers of the Airborne Sound blog have noticed, I’ve been reviewing the Sony PCM-D50 portable recorder and comparing it with the Zoom H4n.

I’m still getting a feel for the new pocket recorder. So, I also wanted to try the D50 in another situation: recording stealth art gallery crowd sound effects.

I like recording in museums and galleries because they have cool architecture. They’re peaceful and filled with great, inspiring art.

They also have surprising potential for diverse sound effects.

Some examples I think about when recording sound fx in museums:

Before I started to record art gallery crowds I thought it would be easy. Just sit in a chair and press record, right?

Now I know better. It’s another reason I like recording museum gallery crowds: because of the challenges.

Why stealth recording is essential when recording gallery sound clips

Recording in art galleries and museums is tricky. The rooms may be big or small, but they are always close to empty. People in museums are focused and move slowly. This means that a recorder and microphone will always be noticed.

Because of this you must record with stealth. You need to conceal the microphone and recorder.

I’ve slipped a 722 and Neumann 191 into museums such as Kunsthistorisches Museum in Vienna and the Tate Modern in London with some success. This isn’t common though. Some museums don’t let you bring bags inside.

And while I managed to sneak the microphone past the security check at both the Museo del Prado in Madrid and the Louvre in Paris, in both situations it was impossible to record with a full kit without being noticed there.

And if you’re noticed, you’ll either be prevented from recording, or crowds will not perform authentically. Genuine recordings are what we want.

Accommodating for a quiet location

Because these locations have little crowd or activity they are also quiet. There are two challenges with quiet locations.

First, you, as the recordist, must be completely silent yourself. Any slight movement or foot shuffle will be captured by the microphone. These movements, although minute, will stick out prominently compared to the rest of the atmosphere. You’ll need to be a statue yourself.

It may seem better to walk away from your microphone so your movement at five meters will just seem like ambient shuffling. Usually this is a good trick. However a bag left in a gallery corner next to a Picasso will be snapped up by security in no time. So you’ll need to keep your equipment with you.

Secondly, you will be wrestling with your preamp. Why? You’ll be recording in large, airy rooms. You’ll be capturing quiet voices and movements. Depending on your microphone and recorder, you may need to crank your levels high. This taxes your preamp and runs the risk of hissy recordings.

Because you’ll be recording amongst multi-million dollar precious paintings, you can expect humourless guards watching you. There are also security cameras.

Avoid and accommodating these adds an extra tactical challenge.

Many museums use special lighting in their galleries. They do this because sunlight and regular lighting damages paintings. The problem of special lighting for a field recordist is that these lighting systems can give off a thin, nasal whine.

Also, many museums use multimedia stations in their exhibits. These can be televisions, projections or audio snippets describing works. All of them make noise that radiates for a long distance. Since galleries are quiet places to begin with, this means the sound travels far. In other locations television noise may be swallowed by other ambient sound more easily.

For some reason it was incredibly busy the night I showed up at the AGO.

In a way this was good. I had previously found I had to crank the levels on the D50 to get decent audio through the binaural microphone. With louder crowd I didn’t need the levels so extremely high that it would strain the preamp.

I was surprised that the AGO had a security guard for every two rooms. I was actually approached by a guard at one point. Perhaps I looked self-conscious. In the end I talked my way around things.

I have three recordings here. Each of them is a recording in a different room size: medium small, medium and medium large.

I like the medium small for the mixture of room types. Even though the room I was recording in was small, the presence of adjoining large room with heavier crowd adds a more cavernous sound.

The medium room recording, although larger, has a more intimate feel. Part of this is the creaky, old wood floor and its isolation from other rooms. You can hear clearer conversations.

The medium large room has your classic gallery footsteps and shuffling. It also has a bit of a washy ‘hush’ aspect to it.