You are here: Home / Gear / Accessory to Help with Stealth Sound Effects Recording?

I’ve mentioned before that I prefer stealth field recording when gathering sound effects.

The idea of stealth and guerilla field recording is to capture your surroundings as intact as possible. You don’t want to create a ripple in the environment with your presence. That would tinge the recording and make it a bit less realistic.

Damaging the original environment happens when:

Because of this I’m always looking for new gear and testing tricks or techniques that help capture ambient sound effects with the lightest impact as possible.

Part of this is being unobtrusive with your gear and physical presence. It often involves disguising your gear.

I just discovered a new accessory that may help.

I’ve mentioned before that I’m a fan of Sound Devices products. They have smooth and quiet preamps and thoughtful software. The engineering is excellent. Construction is solid and robust. The durability and ease of use is fantastic for capturing stealth sound effects, or field recording in general. I’ve used many of their products, and own a 722 and MixPre.

I just stumbled across a Sound Devices accessory, called the CL-WIFI. 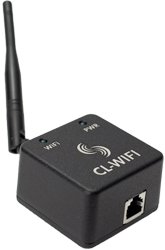 It’s not new. However I’m interested in its possibilities for field recording, and stealth in particular.

The CL-Wifi is a small box with an antenna and 6-pin RJ-12 socket which connects via Ethernet cable to the recorder’s C. Link port. It’s $249. It does just one thing: it provides the 788T audio recorder with a WiFi connection.

Why is this cool? Because you can now connect a 788T with an iPod Touch, iPhone or iPad using an app also called CL-WiFi. 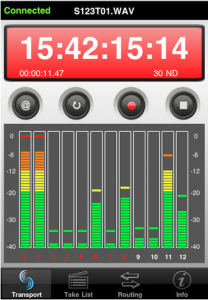 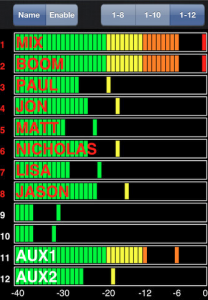 This app allows you to:

I imagine this was designed to help production mixers on set. No longer will you have to lug around a keyboard to input scene names, mark circle takes and so on. Just update info using your iPad.

I imagine it could also be useful for linking to other members of the sound team, and perhaps other crew.

From what I can see it does not:

So how could this be useful for field recording sound effects?

Now of course there are drawbacks. Range is unspecified. It doesn’t have GPS, which would be a cool frill for recording ambiences.

I sent an email to Sound Devices asking if the accessory was compatible with other 7-series recorders. Their reply:

So we can hope!

Thanks to Sound Devices support for the quick response.

Also, the app won’t let you monitor or change levels. So as far as audio is concerned it’s a passive device. I wonder how hard this would be to change.

Perhaps a fader for each track with soloing and muting, in the spirit of the DEVA touchscreen? Is WiFi able to transmit high-fidelity audio to your iPhone? Could it broadcast with low-latency? That would be even better for stealth. That way you could listen to your tracks inconspicuously on an iPhone using a set of Sony MDR-7506 headphones and no one would be wiser.

Here’s a YouTube video by Sound Devices which demonstrates the features:

What do you think? Interesting? Could this be useful when field recording, or recording stealth? Or is it just one more piece of gear to clutter your recording kit? Know any other stealth recording gadgets? Leave your thoughts in the comments below.