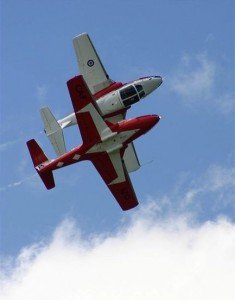 Last week I wrote about recording CF-18 fighter jet sound effects for Airborne Sound. Click over to read about the goal and challenges. You can also hear the jet recordings.

Today I’ll describe the tools I used to compensate for the challenges, including a new perspective I’ve been considering: your mindset.

The primary challenges in this shoot were insects, the location and the schedule.

Before the shoot I used Google maps and my memory of the location to find a barren, isolated spot to record the jets. I knew that there was a risk of insects and birds but figured that fewer trees, bushes and brush would minimize and wildlife. The spot I picked was rocky but that didn’t help much.

The location on Toronto Island was isolated. This meant that the recordings would be free from cars, people or city drone. It was a double-edged sword, however. It was so isolated that moving to a new location with better ambience wasn’t possible in the time I had.

Which leads to the final issue: schedule. I had a narrow window to record the jets. They’d perform for about fifteen minutes each and disappear.

This session nailed down the importance of scouting prior to recording. I wrote about this in an earlier article 6 Reasons Why You Need to Scout Before Recording Sound Effects.

I’m usually good about scouting before the shoot. In this case the location was remote. It would take a good three or four hours to get to and scout the area.

You may be able to skip scouting if you aren’t held to a schedule. You’ll have time to accommodate for problems at your location. In this case I had a narrow window to capture rare jets that appear once a year.

It’s important to hear things with your own ears before you are absorbed with the pressures of the session itself. Relying on advice, even from other pros (and Google maps for that matter) is no substitution for direct experience.

This also applies to advice from non-professionals. Sometimes friends recommend cool sounds they’ve heard. I’ve learned that non-pros hear things broadly. They seem to hear ‘ideas,’ like a car engine they think is cool. Understandably they don’t focus on sound in the same way that we do as field recordists. They may be excited by the power of a protest crowd but not notice the whipping freeway traffic in the background.

When planning to record a snowy owl the conservationists ensured me that area was perfectly quiet. The preserve was remote, but they had tuned out the air traffic from an airport nearby over the years.

Why is all this important?

I listed a few reasons in the earlier article. Scouting is absolutely essential to save time recording, editing and mastering. Also, a new idea:

Field recording can be demanding. You’re operating complex, technical gear. To capture good sound effects you also need to be in simpatico with your subject and be creative. This takes time, energy and focus. A problematic environment will pull your focus away from recording good sound effects. Your attention will be focused on the problems instead of the subject.

Accommodate for these problems in advance. At the very least be aware of what you will be facing before you punch in. You’ll be able to focus on the cool sound you’re recording, not the problems.

Luckily I was able to adapt and accommodate for the insects.

In an earlier article I suggested some tricks you can try to work through field recording sessions that seem out of your control.

I was using a Neumann 191 with a Zoom H4n as backup. The 191 is a great microphone because it captures a sense of depth well. It also represents frequencies accurately, although it is a touch heavy on lower frequencies.

It has another useful aspect. The microphone uses an external matrix box. 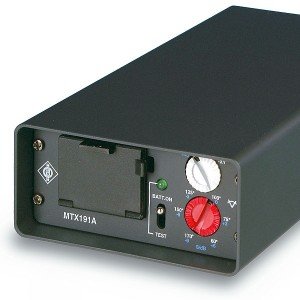 This is a small box with a number of dials that switch between XY and MS. It also has a ‘side level switch’ (the red one in the image above) which changes the level of the side signal. This has the effect of making the recording appear wider or narrower. Here is a page from the manual that shows the polar patterns available by using the side signal dial (click the image to increase the size). 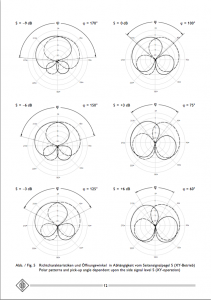 The 191’s matrix box allowed me to change patterns on the fly without touching disturbing the mic itself. Narrowing the pattern allowed me to create a beam-like focus on the jets. It also diminished the strength of the insects from the sides of the microphone.

I used this in combination with the direction of the microphone. I made sure the main crop of insects was directly behind the microphone, where the polar pattern was weakest. This greatly diminished the presence of the insects.

I ran the H4n with the Neumann in tandem. The H4n can’t compare to the quality of the 191, which is ten times its price. But it is interesting to note that the weaknesses of the H4n actually worked in its favour. Compare these two recordings of the Canadian Air Force’s CT-114 Tutor trainer and show jet, know as the ‘Snowbird.’

While the H4n recordings are thin and flat (as can be expected from a $300 mic), you can’t hear insects at all.

Now listen to the 191 recording. The recording is richer. However you can hear crickets and cicadas faintly.

Which would you prefer? A thinner but cleaner recording, or a richer recording with insects?

In addition to tweaking the microphones, I also used positioning to improve the recordings. When I had time, I changed my location to use landscape and props to deflect unwanted sound.

Your mindset is also important.

Often the cool sound we want to record is challenged by technical issues, the environment or other things out of our control.

The insects were impossible to escape. Time to relocate was limited. My subjects, the jets, were out of my control and would only be available a short time. It was frustrating and stressful.

This situation can be common in urban environments.

I spent days trying to capture long, pure exterior ambiences in London. My client required ten minute-long takes. The many airports in the London area filled the sky with aircraft. I couldn’t punch in for more than a minute before another jet flew into the take. I would cut, wait fifteen minutes as it few away then punch in only for it to happen again.

Similarly, you may be recording street crowds when someone begins blasting music, ruining the recording.

Suddenly a field recordist is taken from the excitement of recording cool sound effects to being dropped into the drudgery of problem solving. And some problems can’t be overcome.

Technical fixes will help you solve tangible problems. Taking control of your attitude is just as critical. It will make sure you remain invested and creative during the shoot. I feel these are equally important as equipment to capturing good sound effects.

Here are suggestions to maintain a good mindset while field recording:

If you want to hear more jets recorded from that session, or other fighter jets, you can audition them directly on airbornesound.com.