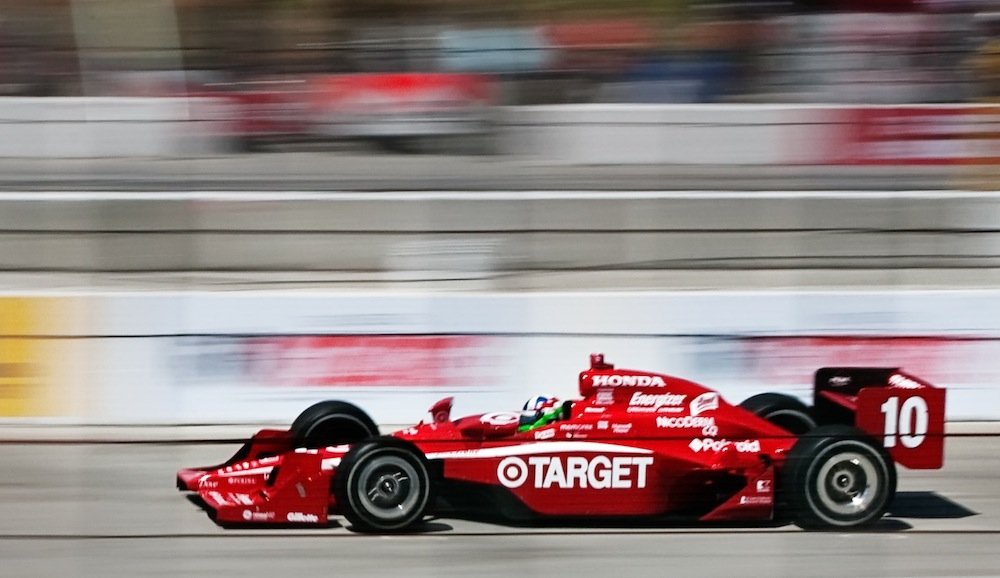 Earlier last year I wrote about my favorite sound effect recordings of 2010. One of them was the Honda Indy race.

Recording 650 horsepower high-performance race car sound fx is thrilling. Being surrounded by the overpowering nasal whine of the IndyCars whipping by creates a powerful yet tense feeling. Just what the type of sounds I want for Airborne Sound: evocative sound effects that transport you to the scene.

But although those race car sound clips were favorites that year, I walked away from the event not fully satisfied.

Compressors, crowd and PA were everywhere on the track. There was no escape from hovering helicopters. It was a challenge to get a minute of clean audio. I didn’t record as much material as I wanted.

In my next post I’ll report how I captured the sounds and analyze why the sounds themselves had potential to be vivid, muscular and evocative sound effects.

The highlight of the Honda Indy is the open-wheel IndyCar race. However there are also four other races: the CRC, Ferrari Challenge, Indy Lights and NASCAR.

Having hundreds of finely-tuned high-performance cars in one place was exciting. As a field recordist, it’s quite a gift to have rare sounds like these in one place performing predictably. It was a good opportunity.

The 11-turn, 2.8-kilometer (1.8 mile) track is on the Exhibition Place fair grounds. It cuts through a small part of Toronto as well.

Exhibition Place is a popular event spot near downtown Toronto. I had recorded the Canadian National Exhibition fair sounds there and also jet sound effects at last year’s air show. It was familiar territory.

While this makes it nice for spectators, it’s a nightmare for field recordists. The grounds are surrounded by highways. A small airport is nearby.

Inside the grounds are a mix of fast food kiosks, beer gardens, car displays and team camps. The grounds themselves are surrounded by event fences.

The year before it had been particularly frustrating to capture clean takes amongst thousands of people. The TV PA in particular carried far.

The good news was that I used that time to scout the crowd and PA hotspots and knew what to avoid.

The cars are loud. This typically drowns out the majority of the problems. It becomes a issue however on the the tail of car passes. When the cars downshift away to enter a turn the exhaust spits out distinctive popping backfire. It echoes amonst the buildings of the location, creating an impressive sense of space and distance. PA, crowd and helicopters would intrude on these all-important quiet tails.

The previous year I had spotted a few areas of the track off-limits to spectators and press. This is where I wanted to record.

The challenges of the shoot were mostly environemental:

Like a lot of rare sounds it is important to guess the levels correctly without any previous reference. Although the race is long, the beginning of the race has a distinct character to it as the cars swerve and jockey impatiently. I didn’t want to miss that.

I considered smuggling my recording kit into the event.

Because of the tight security the year before I brought the compact Zoom H4n recorder. While good for the price, I am now distancing myself from the H4n. It doesn’t do the best job capturing the character of sound I personally strive for: evocative, rich field recordings.

The race car sound effects combine a high whizzing pass with a deep rippling aspect. Often crisp backfire pops follow the passes. While loud nearby, you can still sense the depth of cars struggling throughout the track. And most of all when you are at the race, you feel a sense of power.

I wanted to recording with the stereo shotgun Neumann 191-i to capture this effect.

This kit is larger than a the paperback-sized H4n I had used the year before. It would surely be noticed by security.

Instead of trying to find a way to sneak past security into these restricted areas, I decided to try another approach: I would record the race from the outside.

Being inside the grounds had problems: security would not let me in the gate with a large microphone. PA and people would interfere with the recordings.

If I recorded merely on the other side of the chain-link event fence at one of the unpopulated areas I would get the same recordings without crowd or PA. If I found just the right spot, I’d be able to record the races seamlessly.

The first race I recorded was the Ferrari Challenge. I believe these are converted Ferrari F430 street legal cars. The engines produced some great crisp tones. 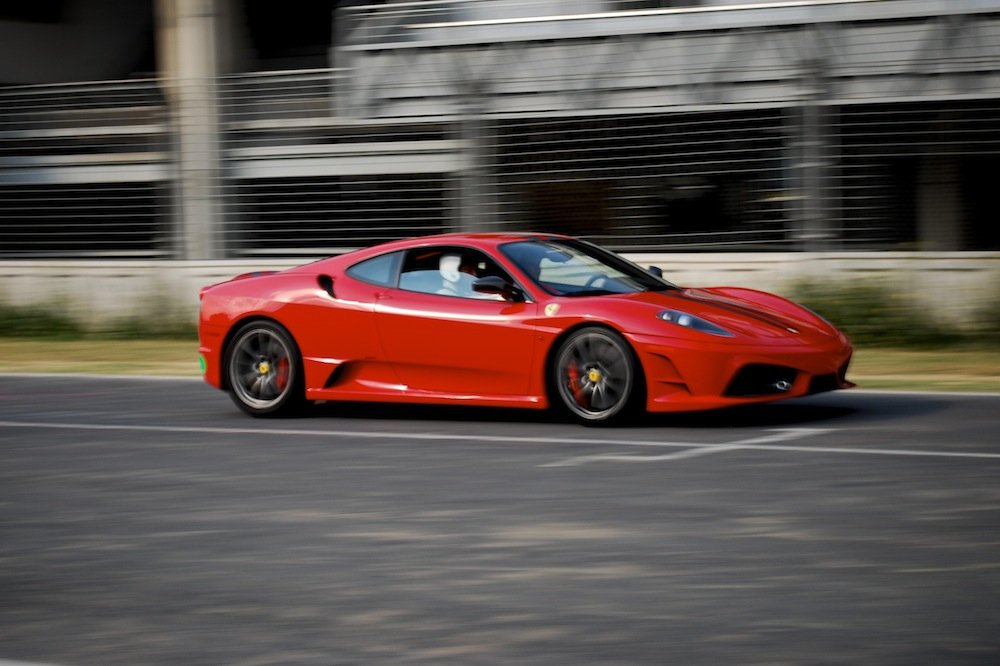 This first track is the pack revving as it warms up during a practice lap.

And here is a sound effect of single Ferrari F430s passing during the race.

The Indy Lights race followed. As far as I understand it is kind of a ‘farm team’ for the IndyCar. The engines are buzzy and more restrained than the IndyCars.

The power of the IndyCars are a substantial jump from the Indy Lights. They are 650 horsepower as opposed to 420. The result is a higher-pitched racing sound.

This first track is the IndyCar parade lap. This is a pre-start lap used to double-check car and track conditions.

Compare that sound to the heated, tense aspect of the IndyCars near the end of the race. It has a frantic aspect to it:

I also found that the drivers performed with more flair, creating more distinctive and characteristic recordings. 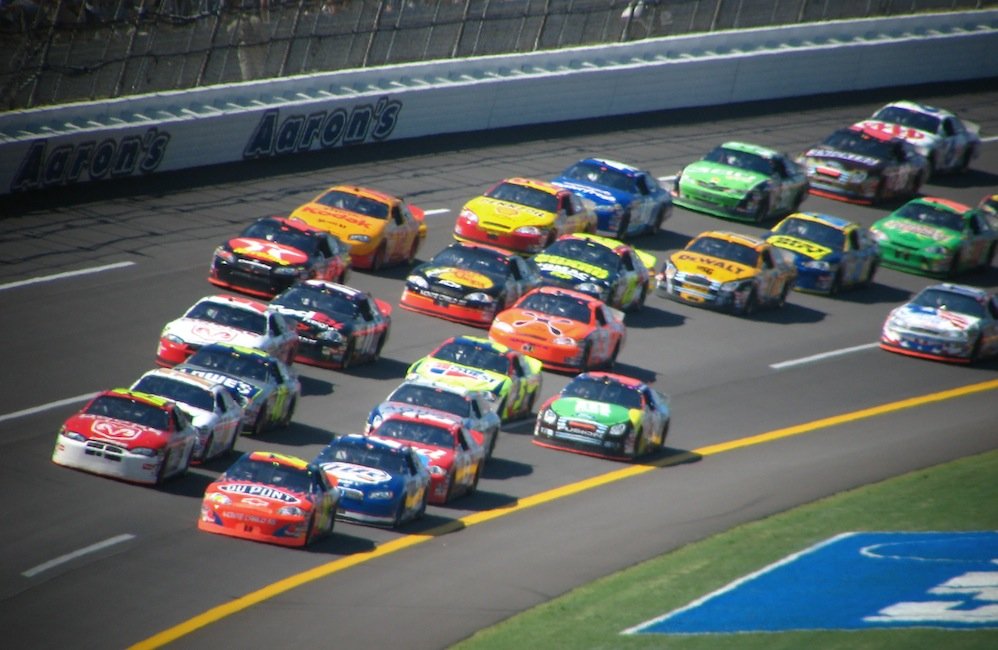 The day ended with a NASCAR race. While the Indy cars are open-wheel cars with low, sleek and fragile frames, NASCAR models are stock cars. They manage a ballpark 550 horsepower. These cars had a deeper aspect compared to the whine of the Indy series.

This track is a Nascar warm-up lap sound effect. It has a lot of character as the cars form up at a medium-slow speed.

And here is a Nascar race car sound clip of packs passing during the race.

I was pleased with the results. I’ll write more about how I recorded these sounds in my next post.

I’ll also include some observations about how these race car sounds have potential to generate emotion and convey an evocative sense of place.