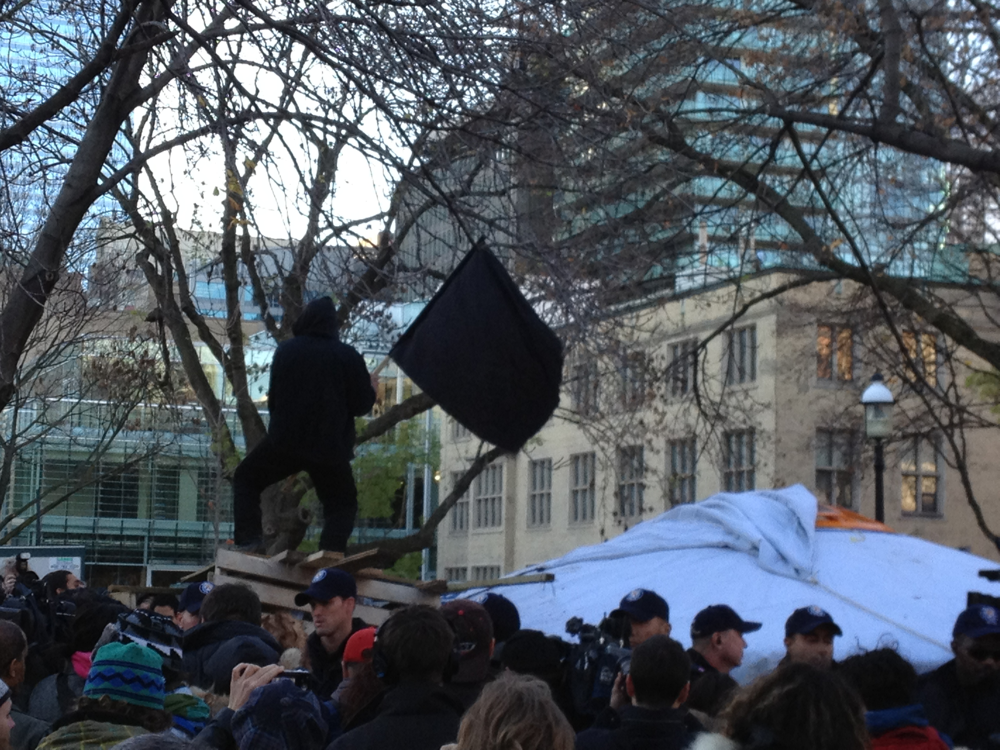 A week last Wednesday the mayor of Toronto’s patience evaporated. He ordered police to evict the Occupy Toronto protestors.

The protestors had been camped in St. James Park, a city-block-sized area next to a church. Tents, tarps and scrap wood structures made a protestor city.

I had no idea this was happening. Luckily, I was in a waiting room that day and the television showed live coverage.

As most of you know, I focus on recording immersive sound effects for Airborne Sound. I like the idea of sound effects transporting the listener to another place. I’m thrilled if I can imprint the experience of an event with someone long after it has happened.

The Occupy Movement had engaged the world. Everyone had an opinion on it one way or another. I thought this would be a great opportunity to document this moment via sound.

Thankfully, I bring my Zoom H4n with me everywhere. I decided to head downtown and record some protest sound effects.

At the park about 150 police stood like sentinels dividing access to areas of the park. City sanitation crew were pitching wood pallets, tarps and plywood into garbage trucks. There were about 500 other people in the muddy, trampled park. 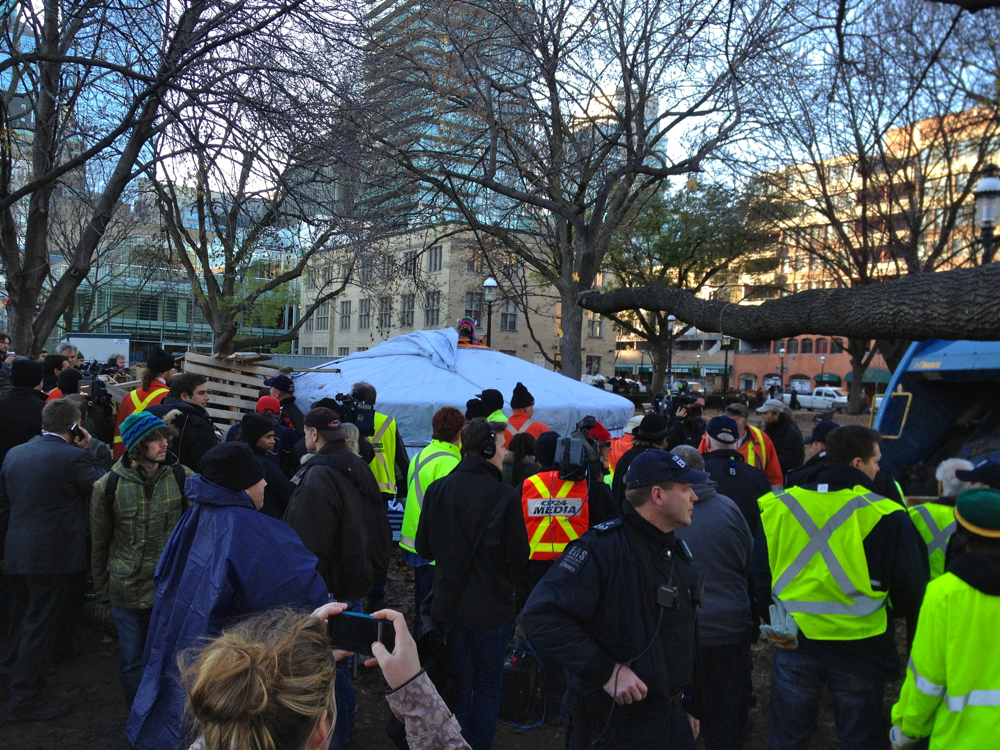 When I arrived I saw three challenges:

At one point some resisting protestors were hauled bodily into the backs of vans. The crowd began chanting ‘let them go.’ Midway a protestor up in a tree began spewing venom at the police, completely overwhelmed with fury. A few closer voices, the background drums, garbage trucks and blaring horns give a good impression of the chaos you’d feel there.

I like this next track because of the disarray. There are some swearing protestors, a man speaking zen-like messages from a megaphone, drums, milling crowd and a distant garbage truck crushing wood structures.

Here’s a closer perspective the garbage trucks destroying the protestor city. There are a few ‘pop-out’ voices of protestors challenging bystander opinions.

Most problems when field recording ambient sound effects can be cleared up by altering the microphone position.

In this specific case it wouldn’t help with overlap or the protest tourists. It had only a minor effect on the energy.

So I turned to another strategy from the field recordist’s tool box: patience. It’s often essential to wait for the nature of an atmosphere to change.

I waited in the clammy cold and mud about four hours. Eventually some decent sound effects emerged. That, combined with editing, provided some sound effects that I feel gave an impression of being there.

It’s easy to become occupied by the technical aspects of recording sound effects: getting lost setting levels, swapping flash cards and choosing microphones. All of this is essential to capturing a sound effect correctly, of course.

However I also believe that more vivid field recordings are created when the recordist employs ‘projection‘ – placing themselves in the subject’s shoes.

For example, my goal was to represent the feelings and energy of the protestors, the stoicism of the police and even the irritation of the sanitation crew in the best way to portray the atmosphere that day. In other words, the intentions of the subjects in the park.

The occupy movement is politically-charged. People at Occupy Toronto were angry and defiant. Both the authorities and the protestors felt strongly. I wanted to capture the energy of their beliefs via sound effects.

Some aspects of the recordings that captured the emotion or intention for me were:

These contributed to the predominant impression I received from that day: chaos. There was so much activity and disorganization. Protestors hooted and police sergeants delegated. Sanitation crews attacked the structures with military determination. And the drums pounded endlessly.

If I was successful the sounds effects above gave you an sense of what it was like to be in that atmosphere of upheaval.

Regardless of your politics, I’d suggest any field recordist visit a protest as an exercise. It’s one of the best opportunities to try to absorb emotions via field recording.

If you can capture these things your field recordings will move beyond a WAV file and have a chance to become evocative for others. It will transmit emotion from the live event to the listener.