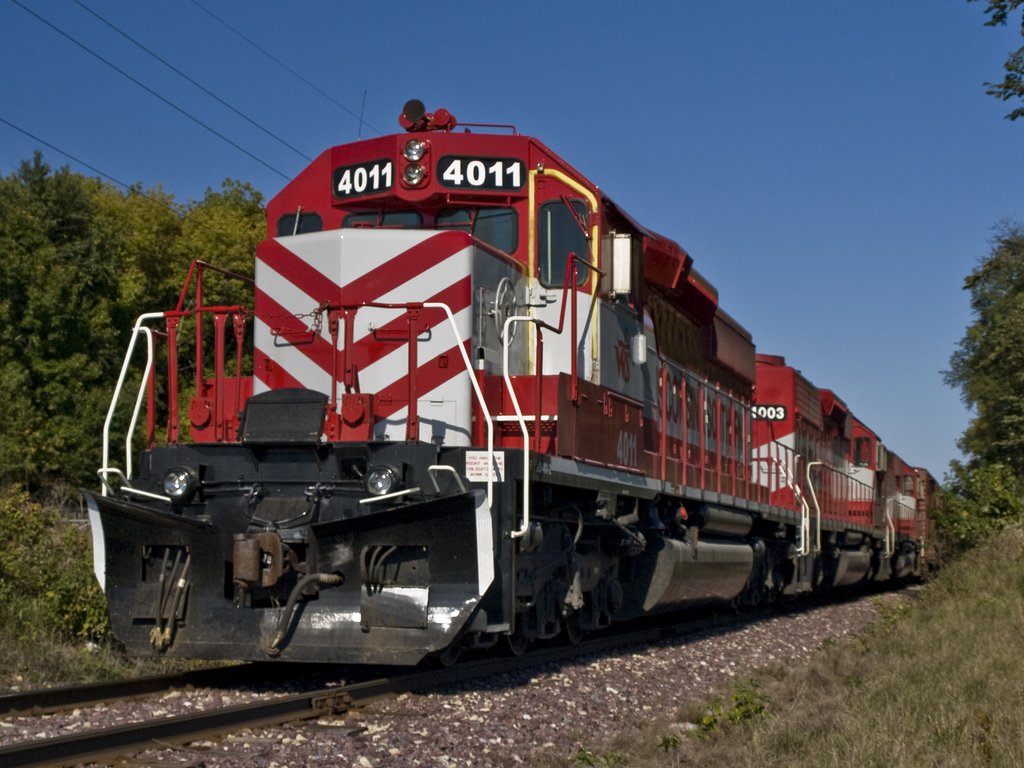 I had freight train field recording on my mind for some time.  However I didn’t find an opportunity to record train sound effects for Airborne Sound until I found myself at a pub drinking Guinness.

One night late in the summer while sharing pints on a backyard patio, a massive rumble and groan swelled as a freight train whipped by, only meters from the pub. Other trains followed. They passed at different speeds, stopped, unlatched and exchanged cars with powerful clanking, grinding and shattering sounds.

I hadn’t noticed the tracks.  From my vantage on the upper patio I could now see tracks hidden behind dense trees, tucked between the neighbourhoods.  There was plenty of area to record, undisturbed and away from traffic.

I returned a number of times to the pub and found that the trains generally passed at the same time. It was a perfect opportunity.

I have added a “Lessons Learned” section to the Field Reports. It’s at the conclusion of the post.

I was determined to capture these subtle differences.

(Thank you to readers Speed, ObscureRobot and Sonic Fields who shared their knowledge.)

I reserved a morning to scout the area behind the pub.

I scanned the area using Google maps. I saw that a breadth of brush and ruined concrete ran for some distance along the track.  This meant plenty of space to set up safely.

I hiked along both sides of the track but I found that the best areas were either on private land or were too close to traffic.

Getting near the tracks was easy.  I found an entry point on public land in a desolate stretch beneath a condo construction site.  When listening to the trains earlier on the pub patio, I had noticed that there was a surge of activity around 1900 hours.  This would work well.  Construction would be finished for the day.  There would be less traffic as well.

I had no plans to cross the tracks.  I’ve seen from personal experience that one moment trains appear as a small speck in the distance and the next they are whipping by.  I was using extreme caution on the track. (PS don’t try this on your own.)

As for the transformer, I hoped a combination of my distance from the substation and the volume of the train would make it negligible. The tone was generally constant, so I planned to EQ it out of recordings.  Finally, the substation was behind the microphone’s polar pattern, further reducing its presence.

You are welcome to download and use these sound effects in your personal projects as long as you do not redistribute them, even for free.

If you find them useful, please retweet this post (button on the left) and share it with as many people as you can. Also subscribe to our RSS feed or Twitter. This really helps us.

I was lucky and five trains passed during the three hour shoot. I’ve included both microphone recordings for comparison.

This recording is of a General Electric EMD SD40-2 locomotive.  It has 3,000 horsepower and a V16 engine.

There were no cars, just two engines joined together with the second attached facing backwards.

The second was a full locomotive train with cars.  It was the General Electric ES44AC.  The Canadian Pacific Railway has about 200 of these trains, making it one of the most common in Ontario.  It has 4,400 horsepower.

The first train I recorded approached just as I arrived.  I hurried to set up and punched in with seconds to spare.  Unfortunately the levels were too high and the engine distorted.  I salvaged the recording by creating a loopable sound effect of the train cars passing.

The sound will be seamless when placed end to end. The waveform has a 0 point at the head and tail, which means it will repeat without introducing a pop or click.

The first lesson I learned was to keep my ears open. I hadn’t expected to hear a freight train passing near a pub patio. Being aware of your sonic surroundings can help you later.

When I hear something cool I add it immediately to my Evernote to-do list. It may not be the perfect time at the moment, but you can return later to record in more controled circumstances.

I also learned that details contribute to better sound effects. I don’t know much about freight trains. The readers of my previous post clearly have a deep appreciation of trains.

These comments sparked my interest. Combined with my own research I learned what was different between the trains and what to expect.

Knowing more about what you record enables you to capture nuances and details.  This is one of the key aspects in making your sound effects lush and evocative.

This knowledge also helps when using the sound effects. Much in the same way that revolver sound effect will be the wrong sound for an automatic pistol shooting, you don’t want to cut in a passenger train for a freight train.

Related: to skip the research, start by recording what you love. Whatever this subject is, you’ll likely have a depth of knowledge already. I wrote more about this in my post Investing Yourself in Sound Effects.

Have you stumbled across cool sound effects unexpectedly? Noticed details about a sound that made it especially interesting? Share in the comments below.