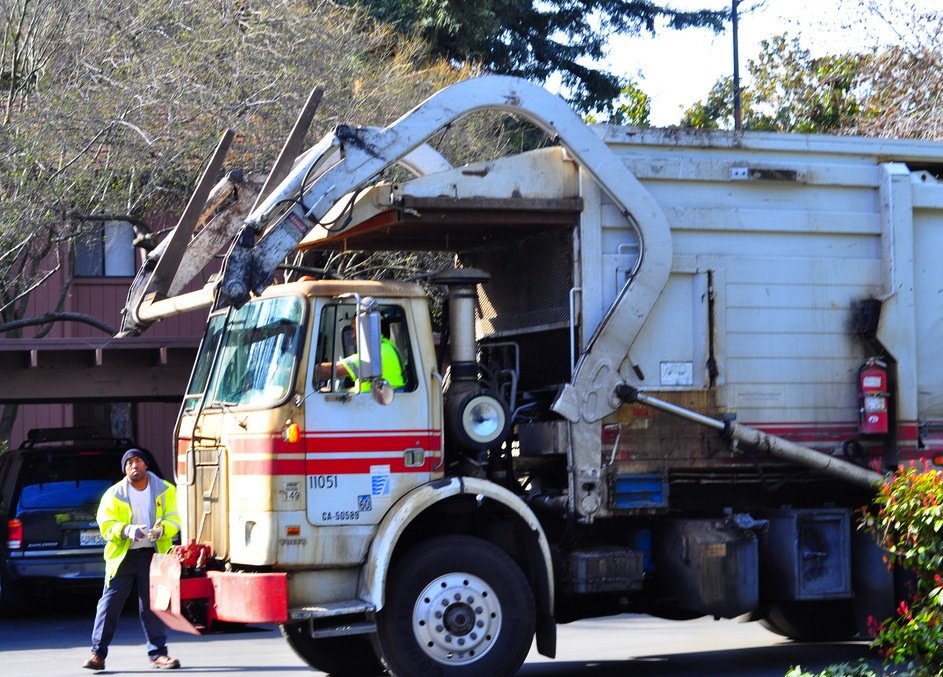 You might observe that garbage trucks are not the most uncommon thing in cities. You’d be right. Finding garbage truck sound effects in downtown Toronto isn’t a problem. That doesn’t make recording them easy. Despite the apparent mundane aspect of these sounds, capturing a field recording of these lumbering beasts has enough other unusual challenges to make it surprisingly tricky.

I have wanted to record a clean, close perspective of these machines without any interference. Like I mentioned in an earlier post, I admire the sound of machines which work with incredible power within the confines of the precise engineering.

Three times a week, trash or recycling trucks visit most addresses in Toronto’s downtown core. For such a common vehicle, they make particularly cool sound effects. The interesting aspect about them to me are the intense sounds they make when they’re picking up trash. A mixture of compressors, hydraulics and servos working with incredible strength and high pressure create a forceful mash of whines, groans and bone-shaking metal crashes.

These particular models load from the front, grabbing wide metal trash bins with forks then lifting and dumping the trash in the truck’s bed. 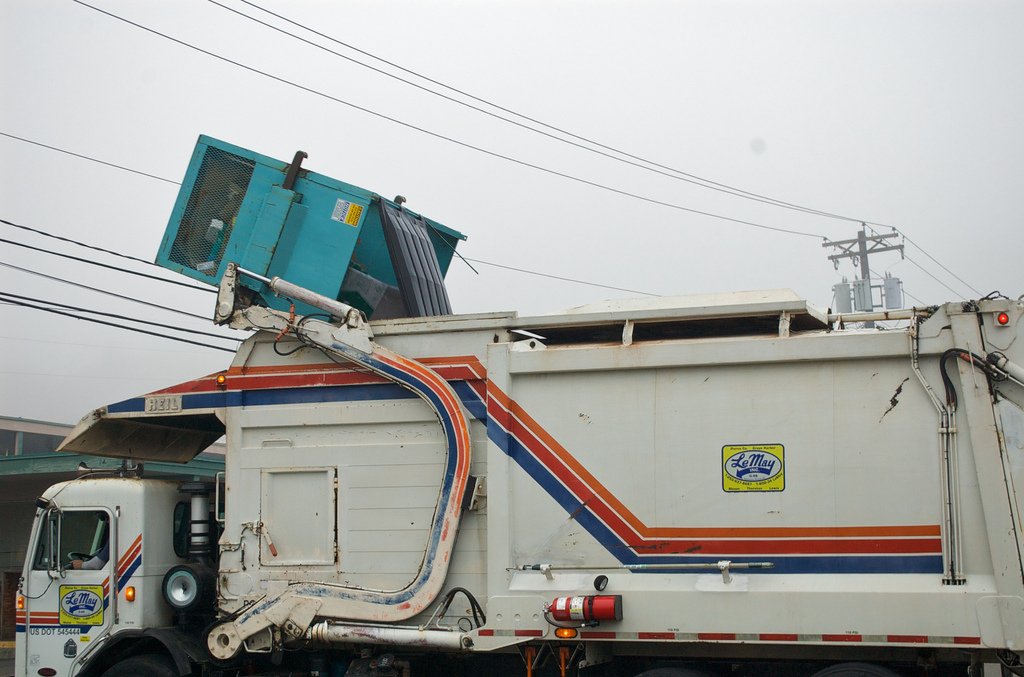 I’d recorded quite a few of these at a distance. However I haven’t had a chance to get the close texture and power from these trucks.

Here’s an example sound effect of one of the trucks working at a distance. You can hear the sound of the city mix with the truck. This adds interesting perspective, but lacks the power the trucks have when they loom over you.

I live in an area with many apartments. I scouted a location that created a canyon of buildings. This isolated sounds away from the rest of the city drone. I was careful to make sure that the buildings didn’t form a completely enclosed courtyard. Some reflections were unavoidable, but I made sure that the location had enough open space so that the reflections didn’t bury the principal sound effect.

I also made sure that this location I scouted was close to home. In residential areas it is easy to hear the trucks approach up the street. In downtown Toronto however, the trucks barrel in and out of apartment complexes quickly. It’s impossible to know when they will show up. At any given location these trucks usually have to pick up multiple bins but they work and depart quickly.

I made sure that the location was in earshot from my home. That way I could hear them approach, grab my gear, and move fast to capture a part of their visit.

Although being in an urban environment means you can find some sounds easily, it also means that many other sounds may interfere. Longer sounds have a higher risk of being compromised.

To help with this, when I’m planning a shoot, I break down the sequence of complex sounds I’m capturing. This helps me prepare positioning and recording levels in advance. This is especially important in stealth or guerilla field recording shoots, when time is tight and preparation doesn’t exist.

In the case of the garbage truck this was:

As you can imagine this sequence takes time and there’s a high risk of interfering sounds such as:

I assembled my equipment in advance. I guessed at the recording levels, and set a −10 decibel pad. I hope this would cut the time I needed, and would let me focus on positioning and timing.

Then, last week, the truck was later than usual and slow pulling in. There were four bins so I would have only that many chances. I raced into the courtyard.

By the time I arrived I had missed the first pickup.

I had guessed the levels incorrectly, and my first take was too quiet. During the next take the apartment staff tried to strike up conversation. During the third and final take I managed to capture the sound just how I had it in mind.

These sound clips were recorded about four meters from the truck.

Find more garbage and recycling truck sound effects at my website airbornesound.com. Here are some links to specific sounds.

Although a garbage truck sound effect is neither obscure or particularly technically rewarding, I approached and broke down other, smaller problems. As I mentioned in an earlier post, challenging yourself can often evoke creativity as well as test your skills.

The challenge here was time. It was important to be ready and move quickly.

When preparation isn’t possible one can only make the best guess at setting levels. In my mind I had compared strength of the metal bangs and the oppressive whine of the compressor. My first guess wasn’t the best. In these situations it’s important to adapt quickly and find the right levels.

I used Izotope RX’s De-Clipper on the one track that peaked and it worked nicely.

Incidentally, you are welcome to download these sound effects to use in your own projects. You can use them freely.

The only restriction is that you cannot redistribute them, even for free.

If you find them useful, please retweet this post and share with as many people as you can. If you’d like, you can also give credit to airbornesound.com.