A few weeks ago I stumbled across a semi-pro tennis tournament. You could tell from the sound alone that the games were evocative and powerful. About five pairs of women were really blasting the ball down the court, complete with tortured grunts and yelps of exertion.

Despite the courts being tucked away from Toronto’s grumbling traffic drone, every few minutes I could hear a distant yet loud and reverberant metal banging and rattling.

Recording tennis wasn’t going to work but now my curiosity had to be satisfied.

I found the source of the sound thirty minutes later at a construction site hidden deep in a neighbourhood. This was good since often construction sites are amongst traffic, making recording isolated machinery difficult. I was actually surprised how far away it was from the tennis match; the metal rattling I heard carried a good ten blocks.

This is what was making the racket (click for a larger image). 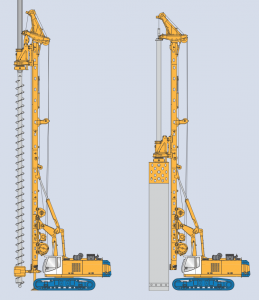 Initially I had no idea what it was or what it was doing. I had never seen anything like it before. The shuddering metallic sound it was making was overwhelming and different than any other construction vehicle sound effect I had heard before.

I later discovered it was a drilling rig.

Drilling rigs typically dig for oil or water. It drills a one meter wide hole into the ground, lifting columns of earth away as it works. In this case I believe they were preparing to lay the foundation for a skyscraper. From what I have heard since, drilling rigs are replacing pile drivers because the pounding can rattle the nerves of entire neighbourhoods.

It was so tall it was difficult to fit into my iPhone photos. 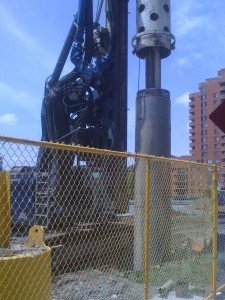 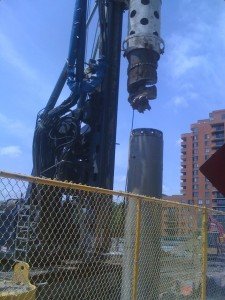 I have plenty of construction sound effects in the Airborne Sound library. I like recording construction vehicle sound effects in particular. The machinery is highly specific and needs specialized motors and equipment. They usually sound pretty cool and easily find their way into sound design. The track treads on digger backhoes, excavator jackhammers and the high-powered motors by obscure manufacturers are favourites.

When I saw the drilling rig I became pretty excited. I hadn’t heard anything like it before. The rattling was deafening but it also carried a powerful, jarring aspect that I hoped would transfer emotion well in sound design.

Since construction sites are pure chaos, the trick was getting this vehicle working on its own. Luckily this Bauer BG 28 H was only a couple of meters distant. After waiting about twenty minutes most of the other vehicles had lumbered away leaving the drilling rig alone.

This meant I could record the subtle sound effects the machine made: the hydraulics, the backing beeps and the cab swivelling. I had to be careful, though. If I had the recording levels too loud the shaking and rattling that followed the drilling would be distorted.

It’s a bit tricky to decipher what you’re hearing. This is the sequence:

Unfortunately the Soundcloud player compresses the dynamic a bit but I was happy with the 96 kHz 24-bit full resolution version.

I liked the hydraulic sound as the bit slowly drilled into the ground. The coolest part was the the distinctive clattering as the rig shook the dirt off the bit. It had a natural reverberant aspect created by the spacious construction site. What was interfering with the tennis game earlier turned out to be one of my favourite sounds recorded that day.