You are here: Home / Technique / What Type of Field Recordist Are You? Why You Need to Know

When I mention that I work in sound, most people assume that it means music. When I clarify by mentioning sound effects, they delightedly say, “You mean Foley, right?”

It’s not their fault. It’s rare enough that people are aware that sync sound is added to a film after it is shot. The leap for people to understand field recording usually involves discussion of stock sound effect libraries, e-commerce, studios and expensive gear.

No wonder few people have heard of our career. Pro field recording jobs are not common; it’s tough enough to sell a director on recording fresh sound effects if the budget and schedule are tight.

Although the availability of inexpensive recording gear means people are capturing sound effects easier and more often, field recording itself is time-consuming and technical, and it remains niche.

Even though ‘field recording’ is esoteric enough, I think we need to go farther describing what we do.

The four types of field recordists

I’ve noticed that most field recordists usually hover around one of these areas. Someone who records comfortably in the studio is usually not the same type you’ll find camping in Yosemite recording bird calls, or sneaking in staff entrances to record forbidden locations.

So why even bother talking about different disciplines of field recording?

When I have a field recording goal, I conceptualize the recording in one of these categories. It helps me approach the job to produce better results.

I don’t mean technically, though this is certainly a factor. I think these categories help me think about not only how but why I record sound effects. Each of these approaches requires a different mentality, and produces different sound effects.

Sometimes a client needs a sound effect recorded and organizes the session for you. All you have to do is show up, set up and record.

HBO, sounddogs.com and the sound supervisors for Generation Kill arranged a shoot of Camp Pendleton recon marines in a desert east of San Diego for a three-day shoot I completed a few years ago. It was a fairly complex session recording guns, a platoon of marines and Iraqi walla over three days. It would have been a mammoth undertaking to arrange this by myself. 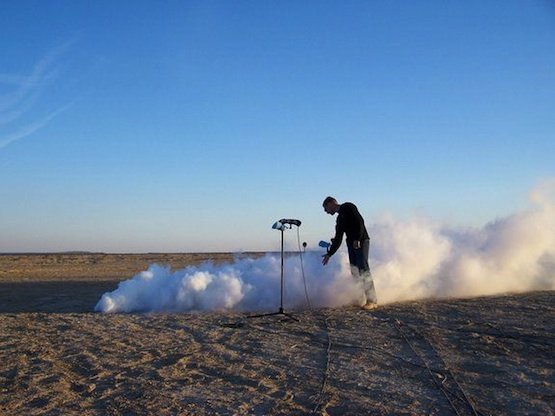 The environment for arranged field recordings is controlled. You won’t have to worry about your environment being compromised by interfering sounds. Both people (actors) and equipment (a car, plane or machine) are there solely for you and you can direct them as you see fit. You have complete control over the recordings.

Because of this I also place studio recording in this category.

This type of field recordist appreciates planned, methodical sound effects. The effects produced from these controlled sessions are clean and precise. You’ll record many takes of similar sounds.

These field recordists can afford to use elaborate microphone arrangements and multiple recorders. This means you can have diversity and extensive coverage. If one take fails, it’s easy to produce another.

At other times a client will simply request a custom sound effect. You will need to determine the best sound and arrange the session. One example would be recording full coverage of a specific animal. You’ll need to search out the sound and convince gatekeepers to allow you to record it.

Because the sound effect is not provided for you, you’ll have an idea of what sound you would like to capture. The challenge for investigative field recordings is making that idea a reality.

These types of recordings aren’t always commissioned, of course. I classify the majority of field recordings in this area. You may simply want to record trains passing, fireworks or glass smashes and set out to make it happen.

This aspect of field recording allows recordists to puzzle out the logistics of a session. It requires research on the Internet, or talking to locals to find the best sound effect or place to record. It may involve tracking down and renting a vintage motorcycle for a day. You may find yourself at a thrift store tapping and shaking junk to find the perfect Foley sound effect.

Since the environment isn’t as managed as controlled field recordings, the effects may not be as clean. But it is arguably more rewarding to track down, organize and capture the sound effect you had imagined in your mind.

As a stealth field recordist you need to sneak into protected places. You need to travel inconspicuously. Your gear needs to be light and you need to be agile.

Stealth recording involves recording in ‘hostile’ environments. In these situations you cannot let your presence as a field recordist be known, or it would compromise the recording. This could be as simple as recording a crowd walking by in a shopping mall. It could be as extreme as being somewhere you’re not allowed to be or where there are authorities near by.

At other times you need to be merely inconspicuous. The sight of a gear will either shut people up, or have them yell directly into the microphone. Becoming invisible is key.

A few years ago I traveled to twenty cities in Europe recording Sound Ideas World Series library. I evaded security in Madrid, rolled tape in an Irish police station right in front of the desk sergeant, hopped fences in France and more.

Here’s an example of a French rooster market I recorded:

Stealth field recordists may have to modify their environment. I’ve switched off TVs, radios and unplugged vending machines temporarily to craft the environment I needed.

If you’re interested in stealth recording you’ll need to have iron patience. I’ve recorded right next to security and they were completely unaware.

Since the recording environment is completely out of your control, you’ll also need persistence. You may need to return to a location at different times of the day to capture the sound effect you need.

As a stealth field recordist you can record environments that are typically off-limits, resulting in the opportunity to capture some rare and incredibly evocative sound effects.

These sound effects are usually ambiences, typically crowds. In contrast to controlled or investigative field recordings these sounds require a lot of mastering after the fact.

Stealth field recordists are limited in the gear they can use. Your equipment needs to be light, compact and inconspicuous. I found that Sonic Studio’s binaural mics were good in these situations.

In the post 9/11 world this discipline has become increasingly difficult. People are suspicious of guys standing around with gear in bags. Tread carefully.

The final category I call guerrilla field recording because of the way these field recordists need to move around.

These are the ambulance chasers of the field recording world. Usually you’re running around trying to capture a sound effect.

Guerrilla field recording is similar to stealth recording in the sense that it is highly uncontrolled.

You usually have to remain calm and collected in unpredictable environments. You need to think on your feet. You also need to quickly analyze an environment and identify and accommodate for intruding sounds.

Last year the G20 met in Toronto and protests were brewing. I hit the streets. I followed a Critical Mass protest. As it was widely reported in the news, armored troop carriers appeared from nowhere at the first sign of large groups congregating and dispersed them. 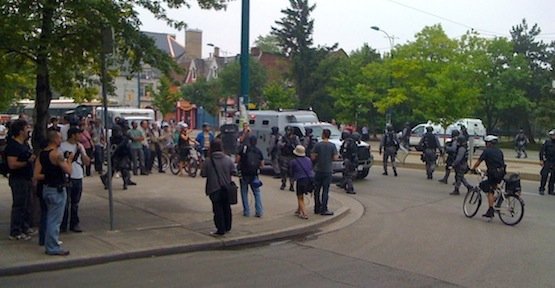 When one protest was shut down I checked Twitter on my iPhone to see where the next protest was popping up and moved quickly to intercept it. Police on horseback solemnly blocked off entire streets. I had to duck through alleyways to cross the city.

I did manage to get a few recordings of the protest. I chose to use the tiny H4n recorder, since more bulky gear would not have allowed me move quickly.

Guerrilla field recordists need to be able to spot opportunities and have a good sense of timing.

Because of the need to move quickly, your equipment needs to be especially light and compact.

Why knowing what type of field recordist you are is important

I believe field recording is not simply defined by what you record. It’s about how you record and why. If you aren’t aware of this, your recordings could be much better.

This is why it is useful to think about these categories before you press record.

Similarly, bringing an elaborate studio set up to a stealth session won’t work.

Thinking this way also addresses a larger question. It makes you consider how you approach capturing sound effects and what field recording means to you.

Why are you a field recordist at all?

Do you like controlled environments and experimenting with gear? You’ll likely produce incredible, pristine sound effects. Do you prefer to explore and push limits? You’ll find yourself capturing sound effects in unpredictable situations, resulting in rare, evocative recordings.

I personally don’t have an expensive Foley room, nor do I want one. Foley is definitely a lot of fun but my goal is to explore the world and capture spontaneous recordings with feeling.

Whereas stealth and guerrilla recordings require you to rely on yourself, Controlled and Investigative field recordings offer the rewarding opportunity to collaborate with other creative people.

The best field recordists bridge all of these disciplines. Some have naturally specialized in one category. Neither choice better than another. What’s important is that you embrace what you want from field recording.

Knowing your goals, your preferences and your limits is critical. Reflect on them. Learn what appeals to you. Discover what intrigues and excites you.